The Toronto Raptors are feeling the impact of COVID-19, and the season hasn’t even started yet.

Three members of the organization have tested positive for the coronavirus a week after the Raptors convened in Tampa, Fla., for training camp, and five days before they’re scheduled to tip off the pre-season.

Raptors general manager Bobby Webster wouldn’t disclose who received the positive results, whether or not they were players, or if they were suffering symptoms of the coronavirus.

But when asked if part if him wonders if it’s all worth it, whether playing this season amid a global pandemic is a good idea, Webster said he believes it is.

“Our season is here months after other professional sports have started … we’ve always said sports are an outlet, sports are a distraction, and I like to believe we’re providing entertainment, we’re providing things for the greater good of the public,” Webster said on a Zoom video call.

“We feel comfortable there’s not further [spread], but it’s not to say a week from now or two weeks from now or in the middle of the season when we’re on the road in Brooklyn that we’re not going to have this again. And so we’ll continue to confront those challenges. But I do think from a professional manner, basketball is our livelihood, it’s the livelihood of these players, coaches, and a number of staff, so we think following the protocols we can get through this.”

The Raptors’ positive results came during the NBA-mandated testing period prior to training camp. The league announced last week that 48 players — about nine per cent — had tested positive in pre-camp testing.

On Sunday, the Portland Trail Blazers shut down their practice facility due to three positive cases within their organization.

A day earlier, Raptors head coach Nick Nurse had talked about how potentially devastating COVID-19 could be to the team and the season.

“My role is to just constantly be on [players] and be a reminder constantly of our actions and our behaviour, and how impactful it is not only themselves, their families, our team, the organization, there’s lots on the line if you’re not doing the best you can with the COVID-19 protocols,” Nurse said.

Nurse had told reporters Sunday that all 20 players in camp had participated in the team’s first group practice.

Asked whether or not Nurse did indeed have a full complement of healthy players at practice, Webster wouldn’t say, citing privacy issues.

The Raptors said the three individuals are self-isolating away from the rest of the team. Webster said the Raptors were permitted to practice Monday because there’s been no evidence of further spread. 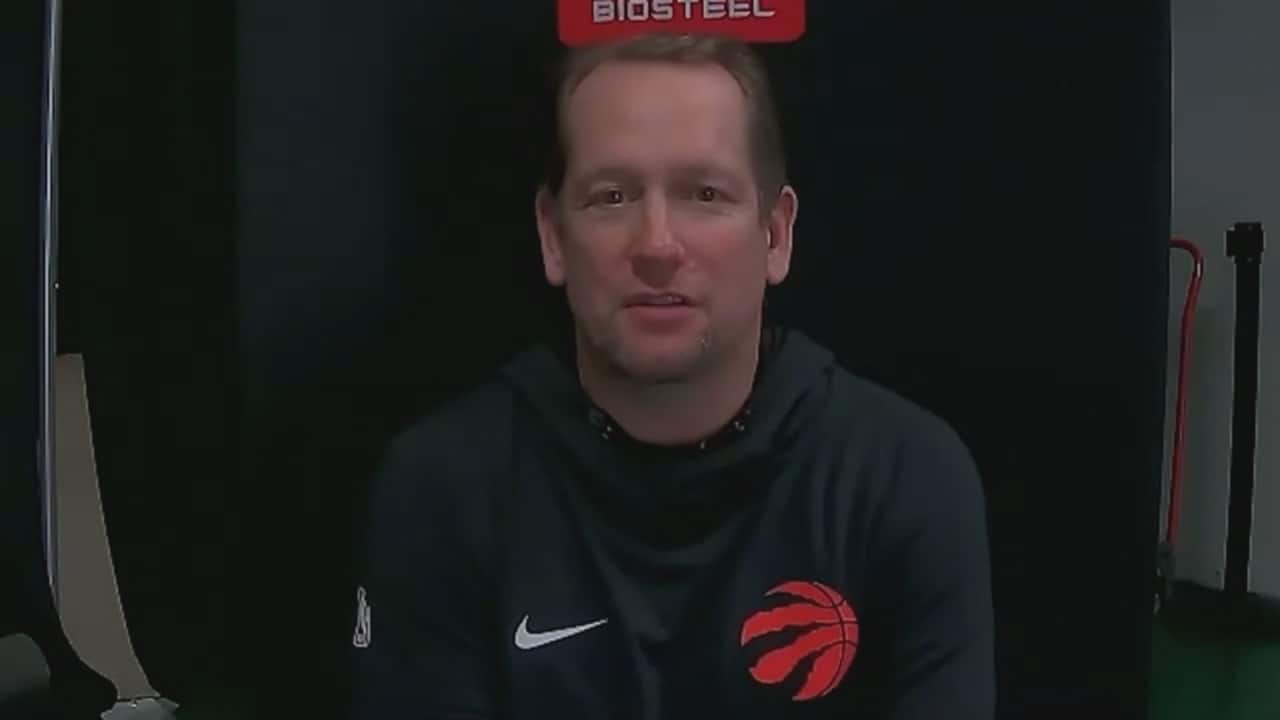 The NBA was among the major global sports leagues to shutter on March 11, after Utah’s Rudy Gobert tested positive. Other global leagues and events follow suit like a row of dominoes.

The NBA successfully finished the season over the summer, but it was within a protective “bubble” at Walt Disney World, perhaps the safest spot in the U.S. amid the raging pandemic.

The Raptors had hoped to play this season at home at Scotiabank Arena, but didn’t get clearance due to Canada’s travel restrictions and rising cases here.

The Raptors chose Tampa and Amalie Arena, despite Florida being a COVID-19 hotspot. The Sunshine State had 8,436 new cases Monday, and last week surpassed the one-million total case mark.

Positive cases in the NBA come as little surprise. The NFL has had dozens of cases, along with NCAA football and basketball.

“It’s constantly on our mind, at the same time we’re trying to prepare for an NBA season, as I’m sure most of us are seeing around the sports landscape, this was bound to happen.” 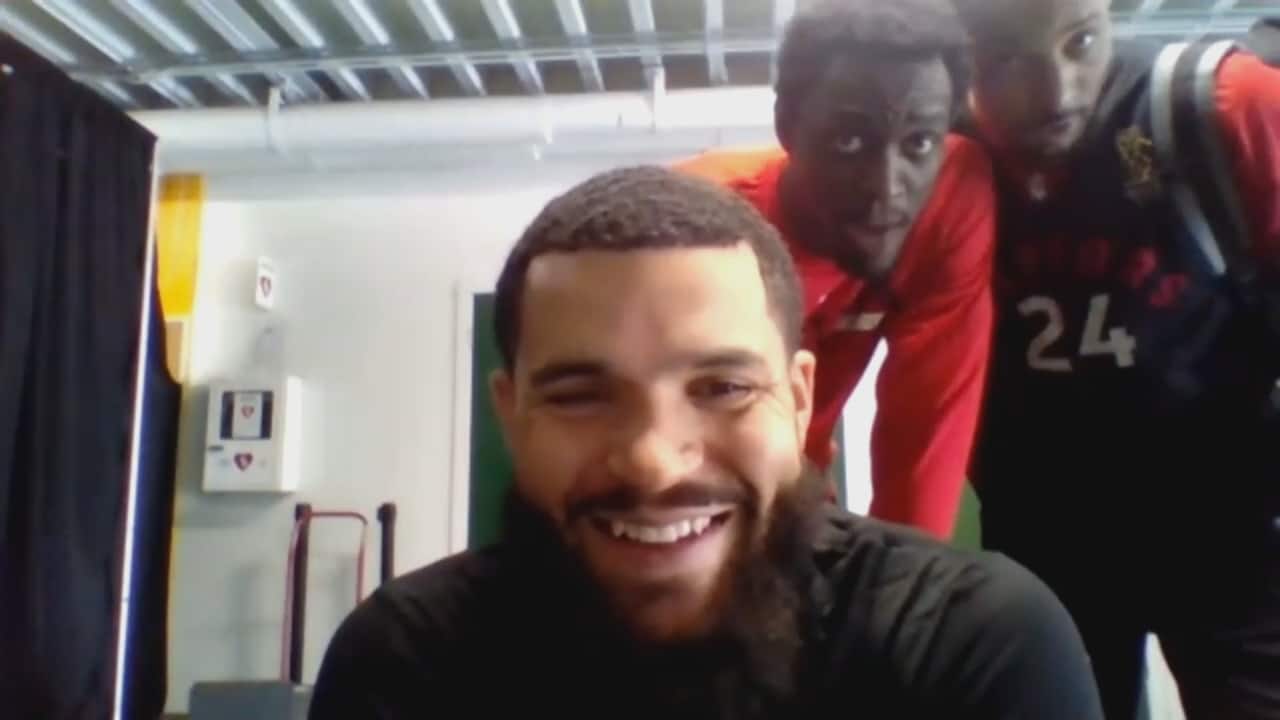 During Fred VanVleet’s press conference with the media, he’s interrupted by his teammates Pascal Siakam and Norman Powell. 0:30

The NBA has produced a 150-page document outlining the numerous health and safety protocols to follow if teams are to get through this bizarre season.

“They’re extensive … but there’s the real world, so you have questions, is this allowed? Is this not allowed? How do I dine outdoors safely? So it’s tough. It’s the endless amount of questions we all have and sometimes they seem a bit counterintuitive, or sometimes they seem maybe contradictory,” Webster said. “So, it’s erring on the super-conservative side limiting your exposure.”

Webster said the players, who are temporarily living in a Tampa hotel, have been careful about potential exposure, mostly eating meals in their rooms and distancing while travelling. The only place they’re not physically distanced is during practice.

Fred VanVleet doesn’t believe any of the Raptors would be reckless about health protocols, but said it’s on the players to hold each other accountable.

The players accepted the strict protocols and daily testing, he said, as part of the new normal.

“The NBA is definitely trying to cover all its bases and make sure it’s a safe environment for us. I don’t have great expectations about that, I think it’s going to be tough to do but this is what it is and we’ve got to try to the best we can,” VanVleet said.

Health experts have questioned the return of sports, particularly since the longterm impacts of COVID-19 are still relatively unknown.

“If we just put this off by the months that we need to be able to get things back in our communities to where we need, get transmission back under control, to me, that is more worthwhile,” Jason Kindrachuk, a virologist with the University of Manitoba, told The Canadian Press.

Others believe the return to some semblance of normal life, including sports, is important for mental and physical health.

“In North America, team professional sports is so much a part of the day-to-day lives of many that it has to exist in some way,” said Dr. Brian Conway, head of the Vancouver Infectious Diseases Centre. “So I think if we were to turn around at this stage, given what’s been done, and shut it down, there would be a very big push back that would affect health.”

The Raptors are scheduled to play their first pre-season game Saturday at Charlotte and open the 2020-21 season Dec. 23 against the visiting New Orleans Pelicans.