4th time was a charm for Brendan Bottcher’s team

4th time was a charm for Brendan Bottcher’s team

Heading into last night’s Brier final, Bottcher’s Alberta rink was in danger of becoming the Buffalo Bills of curling. Another loss in the title game would make it four in a row — just like those infamous ’90s Bills teams.

Never mind that reaching four consecutive finals in a tournament as competitive as the Brier is a great accomplishment. Or that Bottcher’s team was the underdog in each of the four finals. Or that the opposing skips in those games — Brad Gushue in ’18 and ’20, Kevin Koe in 2019 and this year — are among the greatest ever. Or that legends Russ and Glenn Howard each lost the Brier final four times as a skip (though they both won a pair too). Four consecutive defeats on men’s curling’s biggest stage could have turned Bottcher into a punchline.

Instead, his Alberta team got the last laugh, defeating Koe’s defending-champion Team Canada 4-2 last night in the Calgary bubble. It’s the first Brier title for the 29-year-old Bottcher and his teammates Darren Moulding, Bradley Thiessen and Karrick Martin, who had all endured the three consecutive title-game defeats together. “It sucked the first time, it sucked the second time and it sucked just as much the third time,” Bottcher said after curling 97 per cent last night to become the first skip other than Koe or Gushue to win the Brier since 2015.

A few other takeaways from the Brier:

The Kevin Koe debate will have to wait. If he’d won a record fifth Brier title as a skip last night, we’d be arguing right now about whether Koe is the greatest men’s curler of all time. But the 46-year-old remains tied with Ernie Richardson, Randy Ferbey and Kevin Martin with four titles. Ferbey owns more world titles than Martin, but Martin won an Olympic gold medal in Vancouver, so the edge probably goes to him for now. Koe, though, is clearly still going strong. He’ll be among the favourites at the Canadian Olympic curling trials, which he won four years ago.

Wayne Middaugh stole the show. The 53-year-old hadn’t competed in a Brier in eight years and hadn’t skipped in one in 16. His curling career effectively ended five years ago when he suffered a horrible leg injury while skiing. But when his old friend and teammate Glenn Howard broke several ribs in a recent snowmobile crash (fellas — take it easy out there!) he asked Middaugh to skip his team at the Brier. Middaugh became the story of the tournament by going 7-1 in the round robin to win Pool A and then winning his opening game in the championship pool. Three straight losses after that caused him to barely miss out on the three-team playoffs, but what a run. 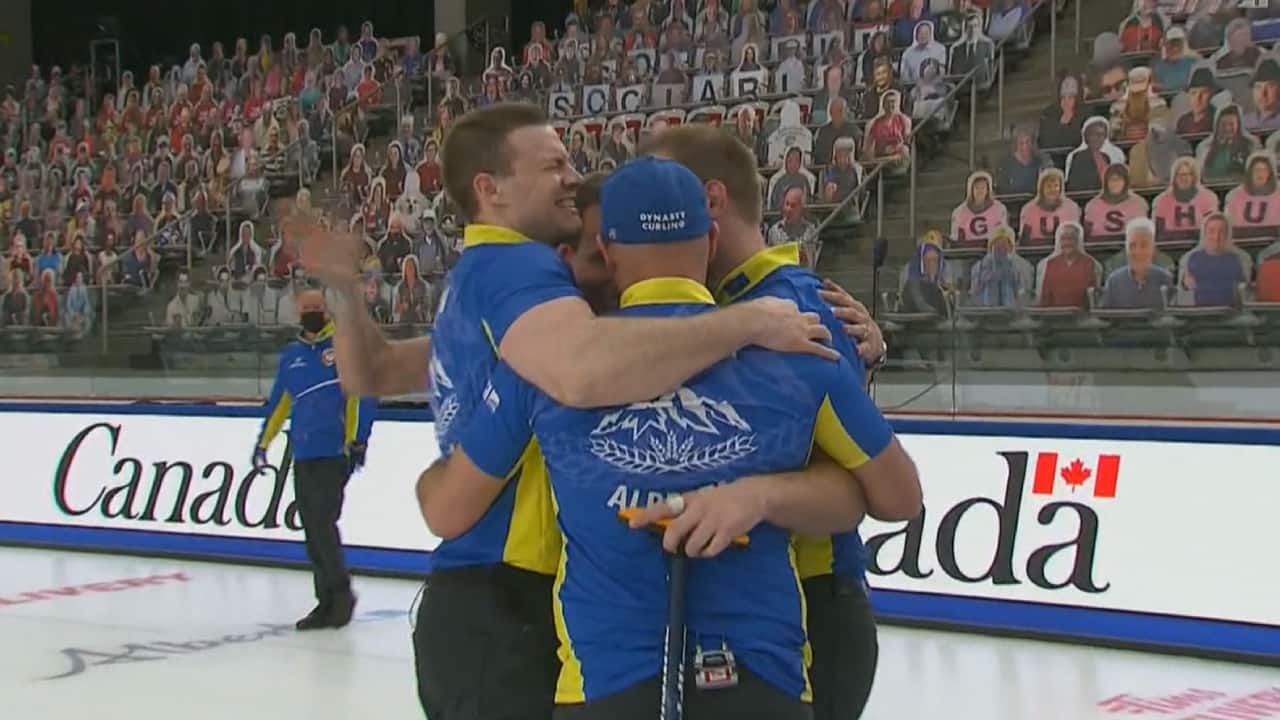 Notice anything weird about the March Madness bracket? For the first time in 45 years, both Duke and Kentucky are missing. Since then the schools have combined to win nine NCAA men’s basketball titles and send countless players to the NBA. Both were ranked in the top 10 in the pre-season Associated Press poll. But Kentucky went 9-16 and Duke was 13-11 and already looking like it would miss the tournament when the program shut itself down last week after a positive COVID-19 test. The clear favourite to win the tournament, which tips off later this week in a bubble-like environment in Indianapolis, is Gonzaga. The Bulldogs are 26-0 and have an important Canadian player in junior guard Andrew Nembhard. The other No. 1 seeds are Michigan, Illinois and Baylor. The schedule is also a little weird this year. Rather than the 64-team field getting started on Thursday, the four play-in games will be held that day and the main event starts Friday. Read more about the bracket here.

Corey Conners was in contention again. A week after finishing third at the Arnold Palmer Invitational, the Canadian golfer had another strong showing at an even more prestigious tournament. Conners shot a final-round 66 yesterday to finish seventh at the Players Championship — four shots behind winner Justin Thomas. The 29-year-old from Listowel, Ont., has pocketed more than $1.1 million US in prize money over the last two weeks and risen to 44th in the official world rankings and 23rd in the FedEx Cup standings.

Canadian freestyle skiers and snowboarders are racking up medals at their world championships. In the past seven days, skier Mikael Kingsbury won double gold in the men’s moguls and dual moguls; Simon d’Artois and Rachael Karker scored silver in, respectively, the men’s and women’s ski halfpipe; Seb Toutant took silver in the men’s snowboard slopestyle; and Megan Oldham grabbed bronze in the women’s ski slopestyle. The world championships for ski and snowboard cross were held back in February, and Eliot Grondin took bronze in the men’s snowboard event. The final world-championship events of the season take place Tuesday, when the men’s and women’s ski and snowboard big air finals will be held in Aspen. Canadians Laurie Blouin, Mark McMorris and Max Parrot will compete in the snowboard competitions. Qualifying for the ski events was still in progress at our publish time. Watch the ski finals live from noon-1:30 p.m. ET and the snowboard finals from 3:30-5 p.m. ET on CBCSports.ca and the CBC Sports app.

And in case you missed it…

A few other things from the weekend you should know about:

Genie Bouchard fell just short of her first tournament win since 2014. The Canadian tennis player reached the final of the modest Guadalajara Open, where she lost 6-2, 7-5 Saturday to 57th-ranked Sara Sorribes Tormo. Bouchard, who was once ranked as high as fifth, rose from 144th to 116th with her run to the final in Mexico. Read more about it and watch highlights here.

Drew Brees retired. The NFL’s all-time leader in passing yards and completions announced yesterday he’s hanging it up after 20 seasons. The last 15 came with the Saints, who took a chance on Brees coming off a career-threatening shoulder injury and ended up creating one of the great QB-coach partnerships in football history. With the inventive Sean Payton designing and calling the plays and Brees executing them to perfection with his pinpoint accuracy and sharp mind, the Saints made a miraculous run to the second round of the playoffs in their first season together — 2006, the year after Hurricane Katrina devastated New Orleans. Three years later, they won the franchise’s first (and still only) Super Bowl, and the Saints made the playoffs in nine of the last 15 years — pretty remarkable for a team that was a laughingstock before Brees arrived. Read more about his brilliant career here.

Marvin Hagler died. One of the most beloved boxers ever, Hagler is best known for his 1980s middleweight battles with Sugar Ray Leonard, Roberto Duran and, of course, Thomas Hearns. The 1985 Hagler-Hearns fight lasted only eight minutes but is revered for the sheer amount of violence the fighters heaped on each other — especially in the first round, which some consider the greatest ever fought — before Hagler stopped Hearns in the third. Hagler won a 15-round decision over Duran in 1983 but lost on points to Leonard in 1987 in his final bout. Hagler died Saturday at the age of 66. Read more about his life and career here and (do yourself a favour) watch that legendary first round of Hagler-Hearns here.