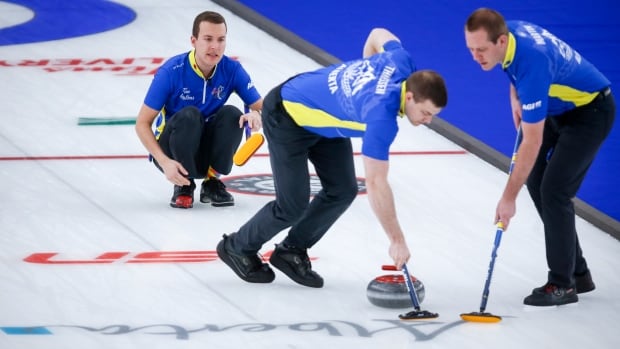 Bottcher removed the Saskatchewan stone from the button with his final throw and stuck around to score two points for the victory.

The last Saskatchewan team to win the Brier was skipped by Rick Folk in 1980.

Both teams played a tentative style at the start of the semifinal. Singles dominated the scoresheet with Bottcher picking up a steal in the eighth end after Dunstone rolled out on a hit to give Alberta a 4-3 lead.

Dunstone rebounded with the first deuce of the game before Bottcher answered with the winning pair.

Koe’s Alberta-based team finished first in the championship pool with a 10-2 record. Dunstone and Bottcher were next at 9-3.

Two extra wild-card entries were added to the field this season. Manitoba-based Mike McEwen took the first wild-card spot and Koe and Ontario-based Glenn Howard took the other entries.

The field was expanded to 18 teams for this season only to accommodate teams that didn’t get an opportunity to compete in provincial/territorial playdowns due to the pandemic.

Koe, who last won the Brier in 2019, can become the first hometown winner since Brad Gushue won in St. John’s, N.L., in 2017. Gushue defended his crown the following year and also won last season.

The 2021 Brier winner will represent Canada at the April 2-11 world men’s curling championship in the same venue.

She will represent Canada at the April 30-May 9 world women’s curling championship. That competition is slated to be the seventh and final event in the Canada Olympic Park hub