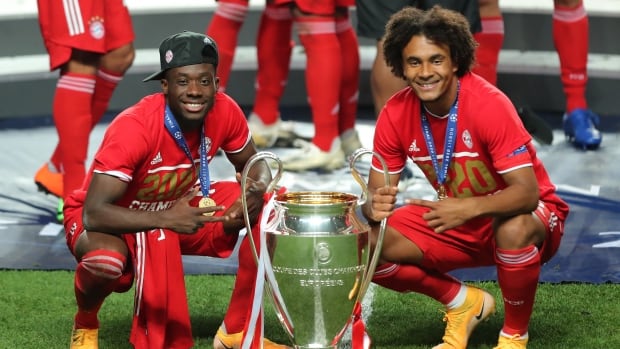 Kingsley Coman headed Bayern Munich to a sixth Champions League title on Sunday, scoring against boyhood club Paris Saint-Germain to seal a 1-0 victory in the first final to be played without fans.

While Bayern won its first final since 2013, PSG has yet to lift the European Cup despite more than $1 billion US being spent on players in nine years.

Bayern’s Alphonso Davies became only the second Canadian to play in soccer’s most prestigious club match — and, in a way, the first. Calgary-born-and-raised Owen Hargreaves won the Champions League title with Bayern in 2001 and Manchester United in ’08. But he never played for Canada internationally.

Davis, 19, was famously born in a refugee camp in Ghana to Liberian parents before moving to Canada when he was five. He played for various Canadian youth national teams before getting his Canadian citizenship and almost immediately making his senior national-team debut at the age of 16.

As such, Davies is the first Canadian national-team member to play in the men’s Champions League final.

Kingsley Coman scored the only goal of the match as Bayern Munich defeats Paris Saint-Germain. 1:21

More than $500 million was spent on Neymar, Kylian Mbappe and Angel Di Maria but PSG looked far from formidable or threatening against the Bavarian giants who felt more assured on European club football’s biggest stage.

As the costly front three were frustrated in front of goal, it was instead a winger who grew up in Paris and started his career at PSG who inflicted the blow.

The 24-year-old Coman ghosted in at the far post unchecked by the PSG defence and was ready to meet a cross from Joshua Kimmich in the 59th minute.

No fans in the stands

The singing PSG contingent around the directors’ box was silenced in a stadium that was largely empty due to coronavirus restrictions.

It completed an incredible transformation this season under Hansi Flick, who took charge in November with Bayern fourth in the Bundesliga.

The season is now over — three months later than planned due to the coronavirus pandemic pause in play — with Bayern treble winners.

The European Cup joins the Bundesliga trophy — won for an eighth successive season and the German Cup.