Bergeron’s double-OT winner worth the wait for Bruins

Bergeron’s double-OT winner worth the wait for Bruins 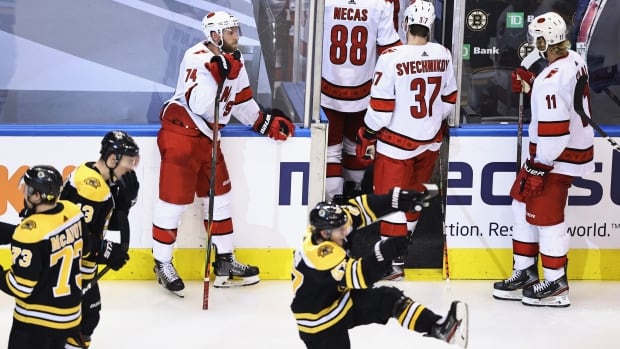 After being told to come back the next morning because another game lasted five overtimes, the Boston Bruins didn’t want to repeat history so quickly.

“We talked about trying to end this before the fifth overtime,” Patrice Bergeron said.

Bergeron accomplished that by scoring early in double overtime, and the Bruins beat the Carolina Hurricanes 4-3 Wednesday in Game 1 of their first-round series that was postponed 15 hours to a rare late-morning start.

The game scheduled for 8 p.m. Tuesday night began the next morning at 11 after the Columbus Blue Jackets-Tampa Bay Lightning series opener became the fourth-longest playoff game in NHL history. Playing all Eastern Conference games at Toronto’s Scotiabank Arena had this potential for games going long messing with the schedule.

“We knew it was a possibility,” said Bergeron, whose four playoff OT goals are the second-most behind Patrick Kane among active players. “You didn’t expect five overtimes, but that being said, we knew it’s part of having a tournament like this in one rink and be ready for the unexpected.”

Patrice Bergeron scored the winner in double overtime, and the Boston Bruins beat the Carolina Hurricanes 4-3 in Game 1 of their first-round series that was postponed 15 hours to a rare late-morning start. 1:35

Hurricanes-Bruins Game 1 wasn’t quite the same marathon with Bergeron scoring 1:13 into the second extra period. But it had plenty of theatre from Carolina’s surprise scratches to a controversial goal and video review.

Much has changed since these teams met in the 2019 Eastern Conference final, but Boston continued its dominance more than a year after sweeping Carolina. The Bruins showed quick recovery from losing all three of their round-robin seeding games and handed the Hurricanes their first loss since hockey returned.

“As a group, we didn’t love our effort. and we didn’t do some of the things we’re known for and what makes us a great team,” Carolina captain Jordan Staal said. “I thought there was some shifts here and there. They played a good game. We have to be better, obviously, if we want to beat the best.”

Joel Edmundson, who wasn’t with the Hurricanes last year and joined them in a trade from the St. Louis Blues after winning the Stanley Cup, scored the first goal of the game, and fellow defenceman Haydn Fleury tied it at 3 in the third after David Krejci put the Bruins ahead.

In his daily recap, Rob Pizzo breaks down the Blue Jackets-Lightning game which was an instant classic.  2:38Fleury would’ve been out of the lineup if not for the surprise scratch of Sami Vatanen, who along with winger Justin Williams was a game-time decision according to coach Rod Brind’Amour.

“We adjusted,” Brind’Amour said. “Hopefully they’ll be able to go (in Game 2 Thursday).

After Boston’s fearsome first line of Bergeron, Brad Marchand and David Pastrnak registered its first goal in the team’s fourth game of the NHL restart late in the first period, Charlie Coyle gave the Bruins the lead 4:38 into the second. Goaltender Petr Mrazek was livid, and Brind’Amour challenged for what the Hurricanes thought was a missed hand pass by Boston’s Brett Ritchie.

Officials and the NHL’s situation room ruled that Mrazek trying to cover the puck negated the hand pass. On the ice, no whistle was blown for Mrazek freezing the play, so Coyle poking it out and scoring was allowed, and Carolina was penalized for the failed challenge.

“That call was — I mean to get the penalty — I still can’t figure it out,” Brind’Amour said.

Brock McGinn scored short-handed 11 seconds later to even things out. After Krejci and Fleury traded goals, this became the sixth game of the past 11 in these playoffs to go to overtime. A video screen inside the arena flashed the message, “Deja Vu?” minutes into OT.

But this game was far from the same as Columbus-Tampa Bay, notably because the Hurricanes and Bruins were primed to play at night and had to regroup for a matinee.

“It was strange,” Marchand said, “but it just kind of goes hand in hand with this whole thing.”