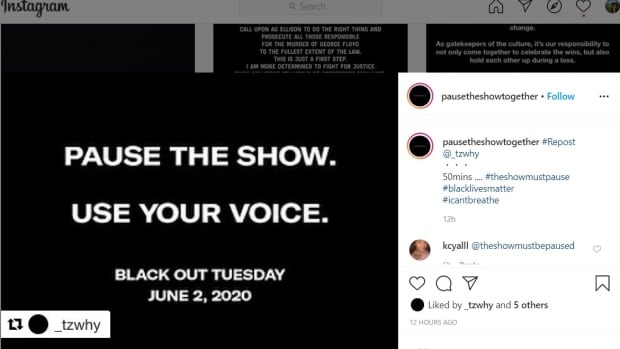 Major broadcasters, music streaming companies and more are joining with celebrities and music labels in halting or altering their regular operations Tuesday to express solidarity with U.S. and international protests against the killing of George Floyd in police custody.

ViacomCBS Inc. said it would be on “on pause” for #BlackOutTuesday to reflect on recent events and to shift focus from “building business to building community.”

On Monday, the company had its channels — including CBS News, MTV and Comedy Central — transmit eight minutes and 46 seconds of breathing sounds with the words “I can’t breathe,” denouncing the incident last week that sparked mass protests across United States and abroad, including in Canada, the U.K. and Australia.

A Minneapolis police officer was arrested last week on third-degree murder and manslaughter charges for his role in the death of the 46-year-old Floyd.

Streaming giant Spotify Technology said it would feature an eight minute and 46 second track of silence in select podcasts and playlists on Tuesday, while also halting social media publications. Apple Music said it would use the day to reflect and plan actions to support black artists, creators and communities.

The initiative originated with #TheShowMustBePaused, an effort led by record industry executives Jamila Thomas and Brianna Agyemang calling for an intentional disruption of the work week to protest against the deaths of black people in police custody.

They also issued a call to action, with suggestions that ranged from supporting the family of Floyd to learning about racial justice to joining grassroots anti-racism campaigns and protests.

“Our mission is to hold the industry at large — including major corporations and their partners who benefit from the efforts, struggles and successes of Black people — accountable,” the organizers said in a statement.

“This is not just a 24-hour initiative. We are and will be in this fight for the long haul.”

Dozens of artists and sports stars have spoken out against Floyd’s death and the racism they say lay behind it as the protests spread. Multiple musicians, including Beyoncé, Taylor Swift, Billie Eilish, Ariana Grande and Jay-Z have spoken out in response to the death and subsequent demonstrations, some of which have turned violent.

On Tuesday, celebrities such as Rihanna, Katy Perry, Britney Spears and Kylie Jenner all went dark on social media to acknowledge Floyd’s death.

NBA stars including LeBron James and Steph Curry posted an empty black photo on their Instagram pages. The league’s official page posted the same photo with the hashtag “#NBATogether.”

However, there has been pushback against some of these attempts at solidarity via social media.

Many people have been posting dark squares with the hashtags #BLM and #BlackLivesMatter.

Black activists have pointed out that including those tags drown out the existing posts, which share information about current protests, important resources and documentation of violence.

In other cases, social media commenters are challenging the sincerity of both companies and individuals who have created “in solidarity” posts, questioning whether their real-life actions, choices and decisions reflect the same anti-racist sentiment they are currently expressing online.

Non-Black folks with blacked out avis &amp;/or the black posts on IG:<br><br>What’s your plan for tomorrow?<br><br>You don’t have to answer me. Interrogate yourself. If the answer didn’t come quickly and didn’t make you even a little uncomfortable, you might consider rethinking your action plan.

Blackout Tuesday is empty signaling. It’s just a checkpoint to pass thru so companies can feel like something has been done. <br><br>I’d much rather they post the results of all this planning they’re saying they’re doing today.