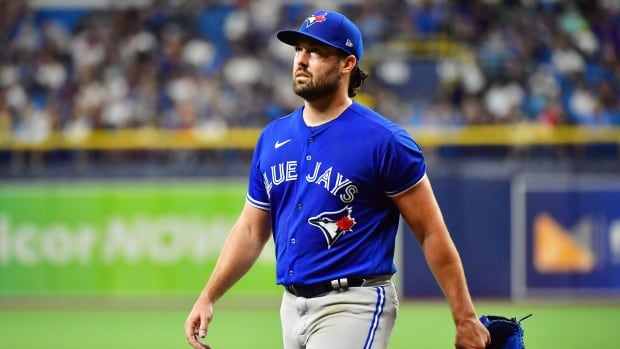 Tampa Bay has a seven-game advantage over second-place Boston with 11 games remaining.

The Blue Jays, who scored twice in the ninth inning and left the bases loaded, had their edge over the New York Yankees for the second AL wild card drop to a half-game.

Baz (1-0) gave up a pair of home runs and little else, striking out five and walking none. The 22-year-old righty, promoted from Triple-A Durham, was on this year’s silver medal-winning U.S. Olympic baseball team.

“It was like a dream come true-type thing,” Baz said.

Baz threw 51 of 65 pitches (78.5 per cent) for strikes, the highest percentage by a starting pitcher in his MLB debut since pitches were first tracked beginning in 1988, according to STATS.

The outing put Baz on the radar for a potential postseason roster spot.

“He’s done that, and we’ll see how it shakes out,” Rays manager Kevin Cash said.

Baz, along with family and friends, was on the field around the pitcher’s mound for an extended period after the game. The group included his mother, father and sister.

“It just means everything to have them here,” Baz said. “It made me so comfortable just getting to see them this morning. It was really special.”

‘We’re not going to quit’

Toronto, which is 15-4 in September, got homers from Teoscar Hernandez, Lourdes Gurriel Jr. and Marcus Semien.

The Blue Jays were limited to two hits and were down 6-2 entering the ninth before George Springer had a leadoff double and scored on Semien’s 41st homer off David Robertson.

JT Chargois replaced Robertson after Vladimir Guerrero Jr. walked and got two outs before Toronto loaded the bases on Danny Jansen’s single and a walk to Gurriel.

Breyvic Valera got ahead 3-0 before taking a called third strike on a full-count pitch from Dietrich Enns, who picked up his second save.

The Rays were without key late-inning reliever Andrew Kittredge, who was placed on the 10-day injured list before the game.

Tampa Bay had a runner reach second against Robbie Ray (12-6) in the first, second and fourth but failed to score. The Rays finally got a key hit when Yandy Diaz connected for a three-run homer in the fifth.

Taylor Walls had a potential one-out double in the Rays fifth turn into a single after his grounder down the left-field line struck umpire Nic Lentz. After Kevin Kiermaier had an infield single, Diaz hit his 12th homer.

Tampa Bay took a 4-2 lead in the sixth as Joey Wendle scored from second when third baseman Jake Lamb was charged with a throwing error on an infield hit by Kiermaier, who was thrown out trying to score on the play.

Manuel Margot had a seventh-inning RBI single and Wendle hit a solo homer in the eighth to put the Rays ahead 6-2.

Baz retired his first four batters, including striking out Springer leading off, before Hernandez hit his 29th homer in the second. Baz set down the next 10 hitters until Gurriel connected for his 20th homer in the fifth.

“Another good arm from the Rays comes up from the minor leagues,” Montoyo said.