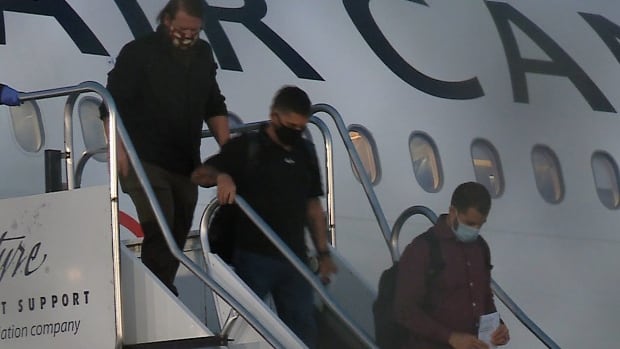 The Toronto Blue Jays were set to hold a private workout at Rogers Centre on Monday without their full roster due to a reported positive COVID-19 case involving a player who remained at the team’s spring training facility in Dunedin, Fla.

The team would not confirm the latest positive case, which was first reported by ESPN’s Jeff Passan. Multiple media outlets also reported the news.

Most of the Blue Jays arrived in the Ontario capital on Sunday night via a team charter. Those who were in contact with the player did not board the flight to Toronto, Passan said on Twitter.

“The Jays are not commenting on [the ESPN report] other than to confirm that there is another charter flight with players and staff that is scheduled to arrive in Toronto later this week,” Richard Griffin, the Blue Jays director of baseball media, told CBC Sports.

Multiple players and staff members tested positive for COVID-19 last month. The team shut down its Dunedin training complex and personnel at the facility underwent testing per protocols established by the Blue Jays’ medical team and MLB.

Players need to be cleared with two negative COVID-19 tests to join training camp. The team would not confirm how many players had arrived in Toronto, but did say a second charter flight was planned for later this week.

Canada’s lone Major League Baseball team received special permission from government and health authorities last week to train at Rogers Centre. Players and team staff will isolate from the general public in a closed environment at the downtown stadium and hotel attached to the venue.

CBC Sports’ Devin Heroux breaks down the Toronto Blue Jays return to Canada, and how the team and league plans on proceeding ahead of tentative Opening Day. 1:35

The team’s 60-game regular-season schedule, which will likely begin July 23 or 24, was expected to be unveiled Monday evening.

Most teams are expected to play in their home stadiums, but the Blue Jays face an additional hurdle because of border and quarantine rules during the pandemic. The team has said it hopes to play home games in Toronto.

Team president Mark Shapiro recently said that he would “expect a large number of positive tests” as more COVID-19 testing was done as players and staffers reported to camp.

“That’s going to be part of the transition process into creating the closed environment as much as possible around our players,” he said on a June 26 conference call.

There has been a significant uptick in COVID-19 cases throughout parts of the United States in recent weeks, including eyebrow-raising numbers coming out of Florida.

Toronto was 12-6 in pre-season play this year before spring training was stopped in mid-March. The Blue Jays finished the 2019 season with a 67-95 record.