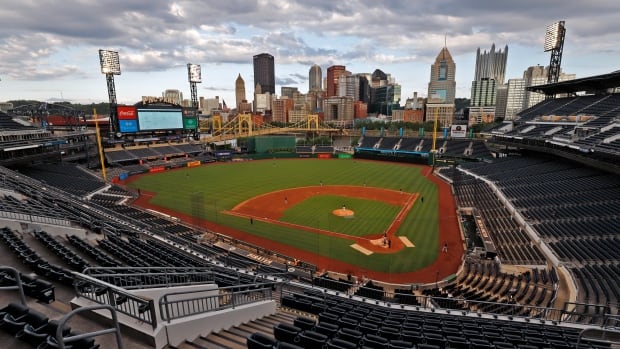 The Toronto Blue Jays will be based out of Pittsburgh for the 2020 season if approved by the state of Pennsylvania, according to reports from multiple media outlets.

CBC Sports has not independently confirmed the reports.

The Blue Jays had originally sought approval for a plan to play its 30 regular-season games at home, but was denied by the federal government last week due to the risks of travelling back and forth from the U.S. during the coronavirus pandemic.

Toronto had considered playing at its spring training facility in Dunedin, Fla., or at Sahlen Field, the home of the Jays’ triple-A affiliate in Buffalo, N.Y. However, surging coronavirus cases in Florida and a lack of space and lighting concerns in Buffalo raised doubts about the potential sites.

The agreement to share PNC Park with the Pittsburgh Pirates is pending state approval, according to the officials who spoke to The Associated Press on condition of anonymity Wednesday because they were not authorized to speak ahead of the government decision.

On Monday, Pirates president Travis Williams said the team welcomed a shared arrangement with the Jays if it could happen safely, while Blue Jays manager Charlie Montoyo said he was excited about the PNC Park option and his Pittsburgh counterpart Derek Shelton said he would have no problem with Toronto moving in.

The Blue Jays open the season Friday night against the Rays in Tampa Bay, with their home opener scheduled for July 29 against the defending World Series champion Washington Nationals.

Pittsburgh is also scheduled to play a home game on July 29, but with Toronto in Washington for two games July 27 and 28, the Pirates and Blue Jays will probably each play in Pittsburgh, with the Pirates likely playing during the day and Toronto at night. The teams have seven conflicting home dates.

The Toronto Sun reported late Tuesday evening that the Blue Jays’ July 31-Aug. 2 home series versus the Phillies could be played 490 kilometres away in Philadelphia should renovations to PNC Park to accommodate Toronto take longer than expected.