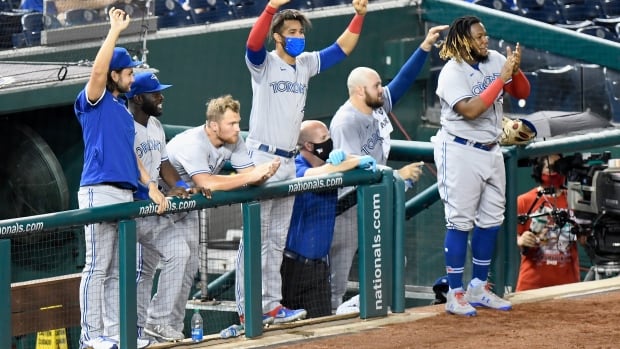 The Toronto Blue Jays will play in Philadelphia this weekend.

Major League Baseball confirmed Wednesday that the Blue Jays will play a double-header at Citizens Bank Park on Saturday, followed by a game on Sunday. The series was originally scheduled to run Friday through Sunday.

The Blue Jays will serve as the home team during the three-game series.

The status of the series was cast in doubt following a novel coronavirus outbreak among the Miami Marlins, who played a season-opening series in Philadelphia last weekend. The Phillies’ four-game, home-and-home series against the New York Yankees was postponed this week

WATCH | Virus continues to cause concern amid MLB’s return:

Less than a week after Major League Baseball returned, a COVID-19 outbreak among the Miami Marlins is raising alarm bells about MLB’s strategy, along with accusations that the league dropped the ball by allowing teams to travel in the first place. 2:02

Philadelphia general manager Matt Klentak said Wednesday that one employee who works in the visiting clubhouse has tested positive for the coronavirus, but all Phillies players and on-field staff tested negative for COVID-19 for a second straight day.

The Phillies’ “road” series with Toronto was switched to Philadelphia because the Blue Jays’ temporary ballpark in Buffalo, New York, isn’t ready. The Blue Jays have been displaced because the Canadian government didn’t want players crossing the border from the United States, where COVID-19 infections have spiked in many states, to play at Toronto’s Rogers Centre.

Klentak said the possibility that Saturday’s doubleheader would feature two seven-inning games is still being discussed, among other options.

The Phillies were scheduled to play the Marlins in Miami next week, but instead they will make up the games against the Yankees.

Klentak said the Phillies became aware that players on the Marlins had tested positive shortly before Sunday’s game and it was the league’s decision to play the game.

“We have to put health and safety first. That is priority No. 1,” Klentak said. “Our guys have been really good about speaking up when they have a question and understanding what they need to do to follow protocols. Most of our players recognize if they follow protocols, that’s the best way to limit an outbreak. They’ve been disciplined about that.”

Phillies pitching coach Bryan Price has been cleared to rejoin the team after missing two games due to COVID-19 protocols. Price stayed home as a precaution after not feeling well and has tested negative.