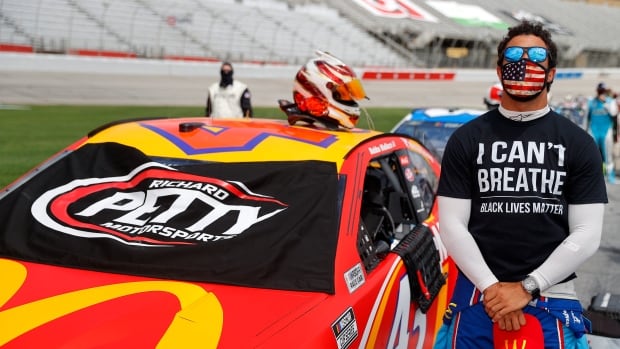 NASCAR Cup Series driver Bubba Wallace appeared to faint after getting out of his car following the conclusion of the Folds of Honor QuikTrip 500 at Atlanta Motor Speedway on Sunday, then appeared to begin to faint again during a live televised interview.

The events concluded a long, humid and emotional day in Atlanta, which began with Wallace wearing an “I Can’t Breathe” t-shirt before the race and saw all 40 cars stop during the warm-up laps as NASCAR president Steve Phelps delivered a message over their headsets pledging to address racial injustice in the wake of the killing of George Floyd.

Wallace is the only black driver currently in the Cup Series, and also took part in a video in which numerous NASCAR drivers calling for social justice. Fox played the video before Sunday’s race, as well.

During the speech, pit crew members stood on the wall in front of their pit boxes and a black NASCAR official could be seen kneeling on one knee — a gesture seen throughout the world by people protesting over Floyd’s death at the hands of Minneapolis police last month and one used by former San Francisco 49ers quarterback Colin Kaepernick during the playing of the national anthem in 2016 to protest police mistreatment of black people.

After the Fox TV crew interviewed race winner Kevin Harvick, the broadcast showed video of Wallace appearing to get lightheaded while talking to members of his crew following the race before collapsing in their arms. Fox then interviewed Wallace on live air as the driver sat on the wall along pit road.

“I don’t even know. Long race I guess,” Wallace said when asked by pit road interviewer Jamie Little what happened after the race. “I stood up too fast. Well I guess I was told I was going to do media, and sat down and got up too fast, and I got dizzy, got lightheaded.

“I feel fine now. Quick scare for everybody.”

He then began explaining how his race went — he finished 21st and one lap down — but then appeared to again get lightheaded, bowing his head down and closing his eyes.

As a member of his crew grabbed him, a voice could be heard saying, “where’s medical?”

“He is not OK,” Little said before cameras cut away.

Wallace, 26, is in his fourth season on the Cup circuit, and his third driving full time for Richard Petty Motorsports. He has yet to win in 86 career Cup starts but has two top fives and six top 10s. He finished in 10th place last weekend at Bristol, his second top 10 of the season.