Team Canada was the steamrolling, bullyboy juggernaut of the world junior hockey championship until they ran into a pugnacious U.S. team Tuesday that knocked them off 2-0 to win gold.

The U.S. players poured over the bench as the buzzer sounded, tossing sticks and gloves aloft in an empty Rogers Place. The tournament was played with no fans in the stands to prevent the spread of COVID-19.

They linked up and swayed with delight on the blue line, lustily singing their anthem as the American flag rose to the rafters as the Canadians, many with their heads down, leaned on their sticks and contemplated what might have been.

For their celebratory centre ice photo, they included a blue barrel emblazoned with the Hockey Canada logo. The barrel, they said represented their mindset, never looking past the next barrel or marker on their way to gold.

Canadian captain Bowen Byram had tears in his eyes as he handed out the silver medals to his teammates.

It’s the first gold medal for the Americans since they won it all in 2017.

U.S. winger Trevor Zegras led the way, scoring a goal and adding an assist. He was named tournament MVP. 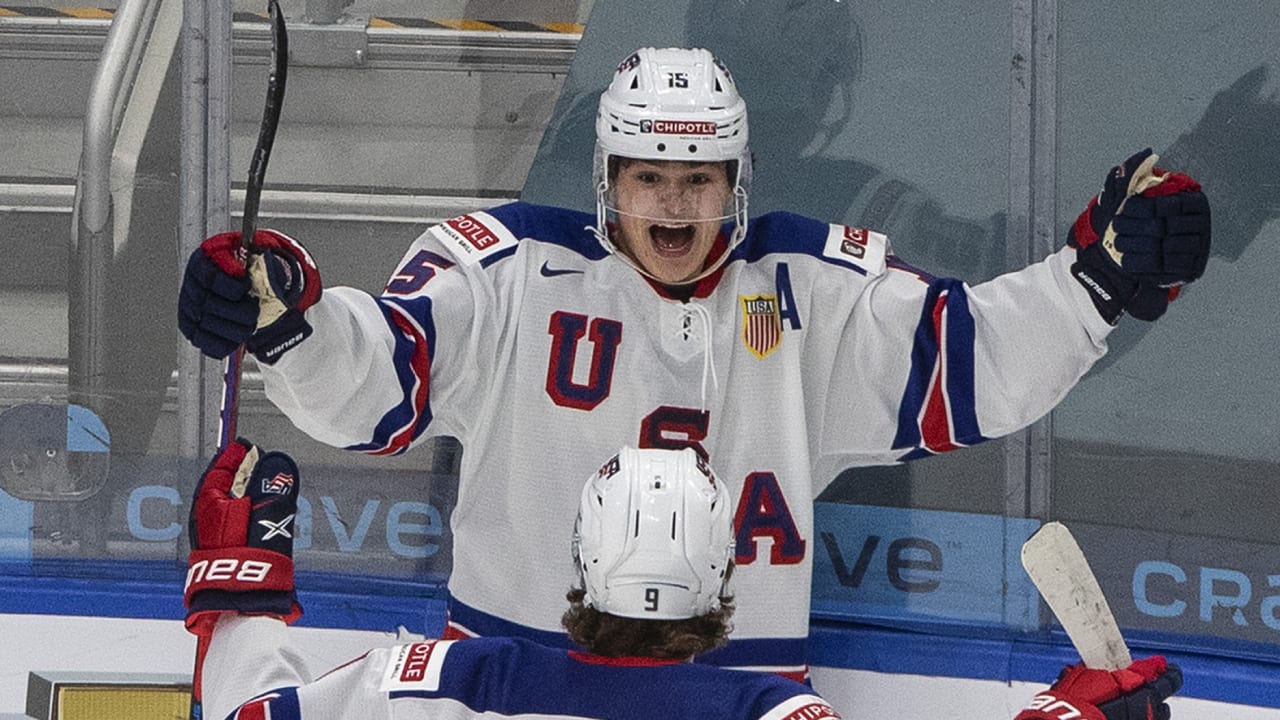 American star Trevor Zegras scored early in the second period to give the United States a 2-0 lead at the world junior hockey championship. 1:00

American goaltender Spencer Knight, a 2019 top pick by the Florida Panthers, turned aside 34 shots for his third shutout of the tournament, tying the record set by Canada’s Devon Levi this year and by Justin Pogge in 2006.

“I think we surprised them in the first two periods with how well we played below their hashmarks,” said Zegras.

“You could tell they hadn’t seen that kind of ground game from any other team in the tournament. We got a couple of quick goals early in those periods and from there we just kind of put it on shutdown mode and played great defence.”

Zegras, a 2019 first-round draft pick of the Anaheim Ducks, was the top scorer of the tournament (seven goals, 11 assists).

Knight was spectacular at times, particularly when the Canadians stormed and buzzed the net late in the second period and came in waves in the third.

Knight stoned Connor McMichael on a breakaway with three minutes left in the game, prompting the Canadian to slam his stick on the glass in frustration.

Levi made 19 saves in the loss.

Asked post-game how he felt Cozens said, “Terrible. We lost the gold medal game. We feel horrible. It sucks.”

Byram added: “We didn’t have the start we wanted. They got up on us and we just couldn’t buy a couple of goals there.

“We’re still very proud of our group and how we played throughout the tournament.”

The U.S. lost its tournament opener 5-3 to Russia before running the table, outscoring opponents 36-10.

Canada had been absolutely dominant, going undefeated and outscoring opponents 41-4 heading into the gold-medal match.

Cozens was asked if the team did not face enough adversity early in the tournament and wasn’t ready when the Americans tested them.

“Our group faced lots of adversity,” he said. “With the COVID testing we had in camp, we had to quarantine for 14 days.

“Obviously we played great through all the games. And then we ran into a team like this. They were good.”

The players battled to a continuous hum of canned crowd noise throughout the game, including ‘oohs’ and ‘aahs’ on hard shots and great saves.

Rogers Place, home to the Edmonton Oilers, was otherwise empty except for hockey officials, media, rink and support staff.

The game featured two Florida draft picks in net: Levi, a seventh-round pick in 2020 and Knight.

The U.S. forechecked ferociously in the first period, outshot Canada 13-9 and opened the scoring at 13:25 when Turcotte deflected a Drew Helleson point shot up and over Levi’s glove.

To that point, Canada had never trailed in the tournament.

The U.S. took a 2-0 lead just 32 seconds into the second period. Arther Kaliyev fired the puck past the net. Zegras grabbed the puck off the end boards and tucked it in on the short side while Levi, expecting the puck to come out the other side, was moving in the opposite direction to cover the far post.

The Americans held off Canada in third to preserve the victory.