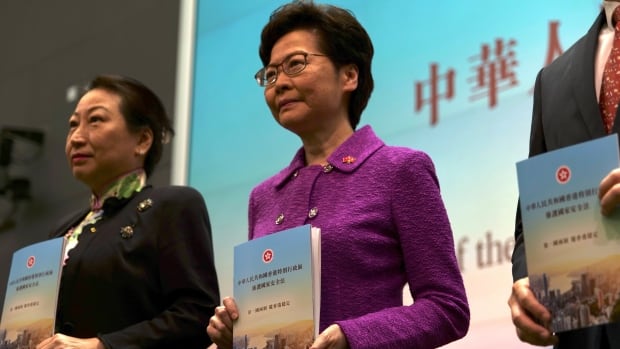 Canada is suspending its extradition treaty with Hong Kong as part of a package of responses to the new security law China has imposed on the region, Prime Minister Justin Trudeau said Friday.

Canada will also treat sensitive goods being exported to Hong Kong as if they were being sent to mainland China.

“Effective immediately, Canada will not permit the export of sensitive military items to Hong Kong,” Trudeau said in a news conference.

China imposed strict new controls on Hong Kong this week, meant to give Beijing more power to police anti-government protests and other activities it considers the work of hostile foreign powers.

Trudeau suggested the new law is a threat to the “one country, two systems” philosophy that was supposed to last 50 years after Britain returned Hong Kong to China in 1997.

Canada’s relationship with Hong Kong, including freer trade and travel than is allowed between Canada and mainland China, depends on that principle, Foreign Affairs Minister François-Philippe Champagne said in a separate statement.

“This process demonstrated disregard for Hong Kong’s basic law and the high degree of autonomy promised for Hong Kong under the ‘one country, two systems’ framework,” Champagne said.

“Hong Kong’s role as a global hub was built on that foundation. Without it, Canada is forced to reassess existing agreements.”

Some countries are working on immigration measures to allow Hong Kong residents to leave.

In an interview Friday with CBC Radio’s As It Happens, Champagne was asked if Canada would do something similar. He said the federal government is considering a “range of options.”

“It’s a very live discussion going on now, both in Canada but also with our international partners. And we will have more to say as the situation evolves, because this is only 48 hours after the law was implemented,” he said.

“We want to see how the law is going to be interpreted and applied. We’ve already seen recent examples which are worrying, and that’s why we are considering additional measures.”

“We will continue to support the many connections between Canada and Hong Kong while also standing up for its people,” Trudeau said.

Prime Minister Justin Trudeau spoke with reporters about the impact of Hong Kong’s new security legislation at a food bank in Gatineau, Quebec on Friday. 2:14

Britain announced that up to 2.6 million Hong Kong residents will be able to move to the United Kingdom for up to five years and ultimately seek citizenship.

Those are holders of special overseas British passports that have had much more limited rights attached to them until now. Trudeau hinted that something similar might be in the works in Canada.

“In the days and weeks to come, we’re also looking at additional measures, including around immigration,” he said.

The relationship between Canada and China remains extremely strained. China is holding two Canadians, Michael Kovrig and Michael Spavor, on national-security charges that Canada considers retaliation for the arrest of Huawei executive Meng Wanzhou in Vancouver in 2018 on a U.S. extradition warrant.