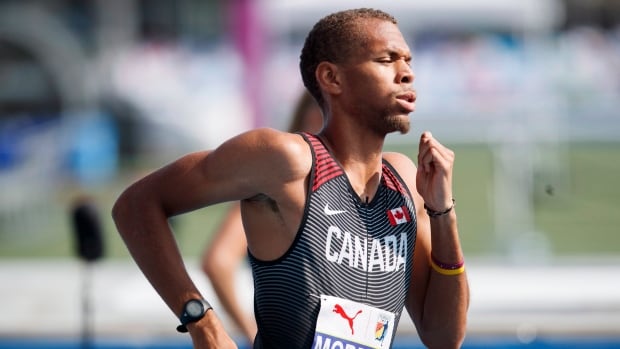 Fear of violent racism has followed Brandon McBride throughout his life.

Similar to Ahmaud Arbery, the 26-year-old runner from Windsor, Ont., said he was once chased through the streets of Mississippi by people wielding shotguns and screaming racist slurs at him.

Similar to George Floyd, he said he’s been outnumbered by police threatening violence toward him for no apparent reason.

“For the longest time I thought there was something wrong with me. Why do I feel this way? Why are these things happening to me? For the longest time folks told me, ‘Hey Brandon, you shouldn’t tell these stories to people. It’ll ruin people’s days,'” McBride said.

“So I kept it all bottled up. But I see that sharing a lot — sharing these things — can really, really help people.”

The deaths of Arbery, a Black man who was shot while out for a run in Georgia, and Floyd, a Black man who died at the knee of a white Minneapolis police officer, sparked worldwide conversation about racism and police brutality in recent weeks.

McBride joined fellow Canadian track and field athletes Aaron Brown, Khamica Bingham, Christabel Nettey, Melissa Bishop-Nriagu and Damian Warner on a panel hosted by CBC Sports’ Anson Henry to discuss their experiences with racism in sport. Bishop-Nriagu, the lone white member of the group, has a Black husband and daughter.

The group agreed that now is the time to speak out against racism. Nettey and Bishop-Nriagu called on Athletics Canada to support a Livestrong-style movement to bring awareness to racial inequality in their sport.

“It could very easily be one of us,” McBride said.

WATCH | Athletes on using their platform:

Nettey said her agents have approached marketing companies only to be told “they’re not moving in that direction” or that “they’re not working with field events.” Later, she’d find out they picked up a less successful white athlete instead.

“It’s real, but it’s hard to think that in this day and age that’s what I’m facing. I never wanted to think I had to do more than my marks, because it is a sport. It shouldn’t really be about your skin colour. It should be about your training,” Nettey said.

‘We’re not comfortable going there’

Bingham was the national 100-metre champion in 2015. She competed at the 2016 Olympics as part of the women’s 4×100 relay team that finished sixth.

The 26-year-old from Brampton, Ont., said she was approached by a running magazine to be its cover athlete after her 2015 victory. However, the magazine later came back to Bingham and told her she didn’t fit their look.

They put a white athlete who’d won a different event on the cover instead.

“Internally I was like, ‘Well, why did I not fit the look?’ I kind of internalized that as my complexion, because I was darker. And I just found this trend that we were left out, we were neglected in terms of beauty in the colour spectrum,” Bingham said.

“It’s like if you’re lighter, it’s like, ‘OK, you’re still Black, you’re beautiful.’ And then I found if you were on the darker side of the spectrum, it was like, ‘We’re not comfortable going there. We don’t feel like we could market as well.'”

Internalizations like Bingham’s are something Brown pointed to as part of his experience dealing with covert racism in Canada.

He said there have been many times when someone has told him “you speak well for a Black person” or “all Black people steal — but not you.” Those microaggressions add up and take a psychological toll, Brown said.

“It’s like what do you mean for a Black person? Are you trying to say most Black people don’t speak well?” Brown said. “I think those things permeate throughout society and people don’t really categorize that as something racist because they’re not directly saying it to you and it’s not like overtly just coming out and calling you the n-word.”

For Warner, it was the first time that racist slur was used against him as a kid that sticks with him to this day. The 30-year-old grew up in a mixed family in Strathroy, Ont., with a Black father and white mother.

The decathlete won bronze at the 2016 Olympics and repeated the performance at the latest worlds. But he still harkens back to that day as a child.

The incident happened as he was walking home from school. He said there were no other Black people in the small town, which made things awkward for him sometimes. There were preconceived notions about who he was because of the colour of his skin.

Warner told his mother what happened, and she explained the origin of the word and its meaning. Warner remembers getting emotional during the conversation, and said his white brother came in late and repeated the word.

“My mom made it very clear that that word’s never to be said and you should never use that word against anybody else. And to this day I’ve never said the word and I never will say the word.”

As Bishop-Nriagu builds her family, she’s begun to learn how mixed relationships can be perceived. The 31-year-old middle-distance runner from Eganville, Ont., said she receives messages from people online telling her she shouldn’t have married a Black man and that her daughter doesn’t belong in this world.

Now that racism has seeped into her daily life, Bishop-Nriagu said the conversation can’t just end with this moment.

“I think this is something that needs to be talked about every single day, forever, until this is fixed. Because this is my husband, this is all my friends, my teammates, this is all of our futures at the forefront and we need to really band together and make a difference right now.”