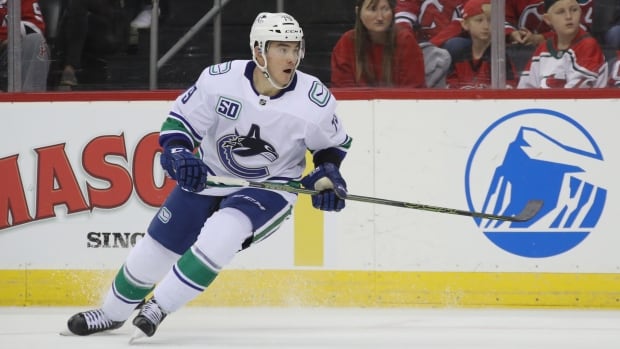 Vancouver Canucks forward Micheal Ferland has spent much of this season battling to overcome concussion symptoms.

His concentration on getting healthy didn’t stop him from watching the protests that were ignited following the police killing of George Floyd in Minneapolis and the subsequent discussion about racism in both Canada and the U.S.

Ferland, a 28-year-old Cree, was born in Swan River, Man. His light complexion meant he didn’t experience the same racism as many of his friends.

“[Because of] the colour of my skin, a lot of people probably don’t really know about my native background,” said Ferland, who signed with the Canucks as a free agent last July. “Growing up, I didn’t really have to go through that kind of stuff, but a lot of my good friends they’ve been through stuff like that.”

A predominately white sport, hockey was forced to look in the mirror this season when players like Akim Aliu, Devante Smith-Pelly and Wayne Simmonds spoke out about their personal experiences with racism.

WATCH | Aliu pushing for inclusion of minorities in hockey:

Former NHL player Akim Aliu is spreading a message of inclusion in hockey after gaining attention for calling out racist comments made by a former coach. 2:12

“It’s a step in the right direction,” Ferland said. “I definitely thought about that big time.”

Over the last month, the NFL team in Washington and the CFL team in Edmonton have both agreed to change their names over concerns they were racist or demeaning.

The NHL’s Chicago team has also been criticized, but Ferland said he would have no objection to wearing the team’s jersey.

“I don’t have a problem with that,” he said. “I know those players wear the jersey with a lot of pride and, I think, to represent that logo means a lot to those guys.

“I don’t have a problem with their jerseys or names. That’s my personal opinion.”

WATCH | Canucks’ Horvat, Sutter ready to block out the noise:

Bo Horvat and Brandon Sutter of the Vancouver Canucks say when the puck drops all other distractions will be tuned out. 1:07

Ferland is one of the players who travelled with the Canucks to Edmonton as Vancouver prepares to face the Minnesota Wild in a best-of-five, play-in series as part of the NHL’s Stanley Cup tournament.

Even before COVID-19 forced the NHL to pause its season, Ferland’s career was in doubt.

He was limited to just 14 games with Vancouver, having suffered a concussion in a fight on Oct. 30 against Kyle Clifford of the L.A. Kings. Ferland’s symptoms returned when he tried to play again in December. His comeback with Vancouver’s AHL farm team in February lasted just a period.

So, there were plenty of question when Ferland joined the Canucks’ training camp. He didn’t skate the first few days but since then has looked strong in scrimmages.

“I feel really good,” he said. “The games are starting to slow down a bit.

“It’s been a tough year. Just being able to go out there, practice, be around the guys, that’s a good feeling.”

After a 138-day hiatus because of COVID-19, the NHL season has returned with exhibition games ahead of the official puck drop on Aug. 1. Players, fans and officials are hoping that the league’s bubble strategy can keep the pandemic out. 2:01

At six-foot-one and 217 pounds, Ferland brings size and grit. He also has a scoring touch, with 60 goals and 134 assists in 335 NHL games with Calgary, Carolina and Vancouver.

Coming into camp, Ferland wasn’t worried about physical contact. He was concerned with his vestibular system, which controls eye movement and balance.

“My eyes weren’t working right,” he said. “I’d get migraines.

“I need to see the bodies, that’s kind of what was bringing on symptoms before. It was never the contact part, it was more of the speed and the bodies and having to make plays at top speed that I was having problems with.”

Being forced off the ice for two months assisted in the healing process. Before the NHL shut down in March, Ferland was constantly pushing himself to return to skating.

“I just wasn’t giving myself enough time to rest,” he said. “I think going home and having two months off, it was what I needed. I haven’t had symptoms or been feeling awful ever since.”

In scrimmages Ferland has been playing with Adam Gaudette and Antoine Roussel, a trio which has the potential to be a physical third line.

“He brings a little bit of everything and a lot of some things,” Green said. “When he’s in the lineup, he’s a handful.”