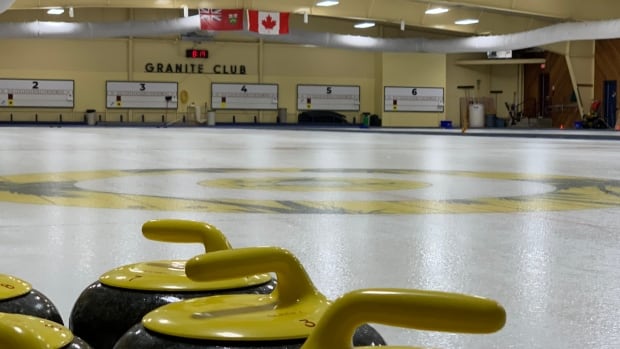 The remainder of the Stu Sells Oakville Tankard — being played at the KW Granite Club in Waterloo, Ont. — has been cancelled after a player was notified by the COVID Alert app they had contact with a person who’s tested positive for COVID-19.

The Twitter account of the Brad Jacobs rink confirmed the cancellation of the remainder of the playoff rounds on Sunday afternoon.

🚨 Announcement – The remainder of our event has been cancelled as a participant in the playoff round was just notified via the COVID app that they had close contest with a positive case. We agree this is the right decision for the safety of everyone involved.

“As a contact of a contact, other players are not required to isolate, but due to the nature of the virus, we will cancel the playoff round at this time,” organizers told CBC Sports in a statement.

“The Stu Sells Oakville Tankard worked closely with the KW Granite Club … to work towards opening an event safely, including a number of mandated protocols that went above and beyond local health guidelines.”

Gerry Geurts, Stu Sells Oakville Tankard organizer, said in a statement that the decision to cancel the remainder of the event was out of an abundance of caution for the safety of all participants.

“We are working within guidelines to try and approach opening the sport safely. There was a requirement to have players hold the COVID Alert app, and we have brought this cancellation upon ourselves, though this is what it’s supposed to do.

“We consider this necessary to ensure we’re proceeding with the utmost of caution in order to protect our sport at the same time.”

The KW Granite Club will close on Monday while the facility undergoes a deep clean. The facility will re-open on Tuesday.

Throughout the event, 12 men’s teams and 12 women’s teams have been taking to the ice on separate occasions — the women’s final went ahead Sunday afternoon.

In a statement, organizers say there was careful consideration and consultation with all teams, finally landing on the side of caution.

“All players participating this weekend in the Stu Sells Oakville Tankard were required to download the COVID Alert tracing app, providing an extra layer of security for the players,” the statement said.

“While no player has tested positive, we did receive an alert on their COVID Alert app, that they had been in contact with a positive case. Under protocols, this player will self-isolate, and the entire team will receive a test to ensure there was no spread.”

Last week’s event had no issues

This comes in the wake of a highly successful first bonspiel held the weekend earlier. It was a much different scenario, however, as it was a mixed-doubles event, which meant half the number of competitors. Ten teams took the ice for three days of competition without any COVID-related concerns or issues. Jennifer Jones and her husband, Brent Laing, won the event.

Matt Wilkinson, president of the KW Granite, told CBC Sports they have taken extraordinary measures to protect the health and safety of players and organizers.

“It’s a new era. The amount of stuff and protocols to go through, understanding how we open the club and even if we were going to open the club, has been a lot to navigate,” he said last weekend.

Now this raises serious questions around the future of the curling season. Curling Canada has provided a comprehensive Return To Play guide for all clubs across the country. Many clubs have decided to cancel their seasons until at least the new year.

Another event is scheduled for next weekend at the same club in Kitchener-Waterloo. At this point, there’s no indication from organizers it is being cancelled.