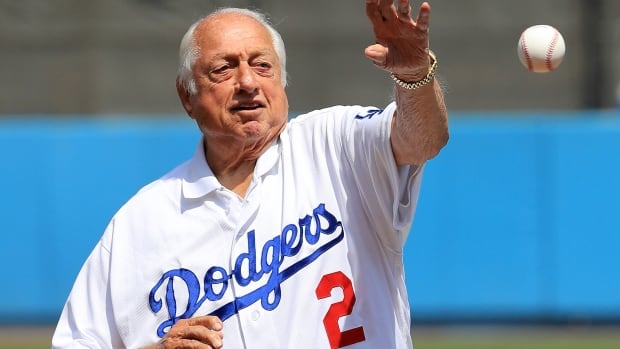 Tommy Lasorda, the fiery Hall of Fame manager who guided the Los Angeles Dodgers to two World Series titles and later became an ambassador for the sport he loved during his 71 years with the franchise, has died. He was 93.

The Dodgers said Friday that he had a heart attack at his home in Fullerton, Calif. Resuscitation attempts were made en route to hospital, where he was pronounced dead shortly before 11 p.m. local time Thursday.

Lasorda had a history of heart problems, including a heart attack in 1996 that ended his managerial career and another in 2012 that required him to have a pacemaker.

He had just returned home Tuesday after being hospitalized since Nov. 8 with heart issues.

Lasorda attended the Dodgers’ Game 6 victory over the Tampa Bay Rays on Oct. 27 in Texas that clinched the team’s first World Series title since 1988. He had served in the role of special adviser to team owner and chairman Mark Walter for the last 14 years, and maintained a frequent presence at games sitting in Walter’s box.

Lasorda worked as a player, scout, manager and front office executive with the Dodgers dating to their roots in Brooklyn.

He was elected to baseball’s Hall of Fame in 1997 as a manager. He guided the U.S. to a baseball gold medal at the 2000 Sydney Olympics.

Lasorda was the franchise’s longest-tenured active employee since Hall of Fame broadcaster Vin Scully retired in 2016 after 67 years. He drew standing ovations when introduced at games in recent years.

He often proclaimed, “I bleed Dodger blue” and he kept a bronze plaque on his desk reading: “Dodger Stadium was his address, but every ballpark was his home.”

Born Thomas Charles Lasorda on Sept. 22, 1927, in Norristown, Pa., his pro career began when he signed with the Philadelphia Phillies as an undrafted free agent in 1945. He missed the 1946 and ’47 seasons while serving in the Army.

Lasorda returned in 1948 and once struck out 25 players in a 15-inning game. In his next two starts, he struck out 15 and 13, gaining the attention of the Dodgers, who drafted him from the Phillies. He played in Panama and Cuba before making his major league debut on Aug. 5, 1954, for the Brooklyn Dodgers. Although he didn’t play in the 1955 World Series, he won a ring as a member of the team.

Lasorda pitched for the Dodgers for two seasons before the Kansas City Athletics bought his contract. He was traded to the Yankees in 1956 and sent down to the Triple-A Denver Bears before being sold back to the Dodgers in 1957. During his time with the Bears, Lasorda was influenced by manager Ralph Houk, who became his role model.

“Ralph taught me if that if you treat players like human beings, they will play like Superman,” Lasorda said in his 2009 biography “I Live For This: Baseball’s Last True Believer.”

“He taught me how a pat on a shoulder can be just as important as a kick in the butt.”

Lasorda stayed on with the Dodgers as a scout after they released him in 1960. That was the beginning of a steady climb through the Dodgers’ system that culminated in his 1973 promotion to the big-league staff under longtime Hall of Fame manager Walter Alston.

Lasorda spent four seasons as third base coach while considered to be the heir apparent to Alston, who retired in September 1976.

Lasorda took over and his gregarious personality was in stark contrast to his restrained predecessor. Lasorda was known for his enthusiasm and outspoken opinions about players. He would jump around and pump his arms in the air after Dodgers victories and embrace players in the dugout after home runs or other good plays.

In L.A., Lasorda found many of the players he had managed in the minors, including Steve Garvey, Ron Cey, Davey Lopes, Bill Russell, Bobby Valentine and Bill Buckner.

He is survived by Jo, his wife of 70 years. The couple lived in the same modest home in Fullerton for 68 years. They have a daughter Laura and a granddaughter Emily. The couple’s son, Tom Jr., died in 1991 of AIDS-related complications.