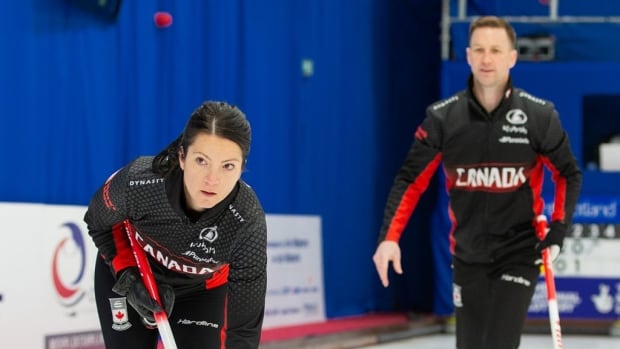 Canada’s Kerri Einarson and Brad Gushue improved to 5-1 at the world mixed doubles curling championship with a 6-4 win over Italy on Thursday.

The win allowed Canada to keep pace with Scotland (5-1) at the top of the Group A standings.

Einarson and Gushue scored a deuce in the eighth and final end to break a tie against Italy’s Stefania Constantini and Amos Mosaner (4-2).

Einarson, from Camp Morton, Man., and Gushue, from St. John’s, N.L., must finish in the top seven to secure a spot for Canada in the mixed doubles discipline at the 2022 Beijing Olympics.

Canada is one of 20 teams entered in the competition.

Gushue and Einarson are trying to become the first Canadian team to win gold in the event’s 13-year history. Canada has reached the podium (two silver, one bronze) at the last three editions of the competition.

The top team in each 10-team pool advances to the semifinals. The second- and third-place teams in each pool will cross over and play qualification games.