The electoral college has formally validated Joe Biden’s victory in the 2020 presidential election.

Biden cleared the 270 electoral vote threshold on Monday after California’s electors cast their votes for the Democrat. When all of the states finish voting, Biden is expected to lead President Donald Trump 306-232.

The electoral college vote is normally a procedural step in the presidential election, but its importance has been heightened this year because Trump is refusing to concede his loss. He and his allies have filed roughly 50 lawsuits, and most have been dropped or dismissed by judges, including twice by the U.S. Supreme Court.

Heightened security was in place in some states as electors in Arizona, Georgia, Michigan, Nevada, Pennsylvania and Wisconsin — the six battleground states that Biden won and Donald Trump contested — gave Biden and vice-president-elect Kamala Harris their votes Monday in low-key proceedings.

Monday was the day set by law for the meeting of the electoral college. Electors cast paper ballots in gatherings that were taking place in all 50 states and the District of Columbia, with masks, physical distancing and other coronavirus precautions the order of the day.

Results to be finalized Jan. 6

The results will be sent to Washington and tallied in a Jan. 6 joint session of Congress over which Vice-President Mike Pence will preside.

Wisconsin cast its 10 electoral college votes for Biden, just about an hour after the Wisconsin Supreme Court rejected a lawsuit from U.S. President Donald Trump seeking to overturn the election results.

Nevada held its ceremony over Zoom due to the coronavirus outbreak.

There have been concerns about safety for the electors, virtually unheard of in previous years. 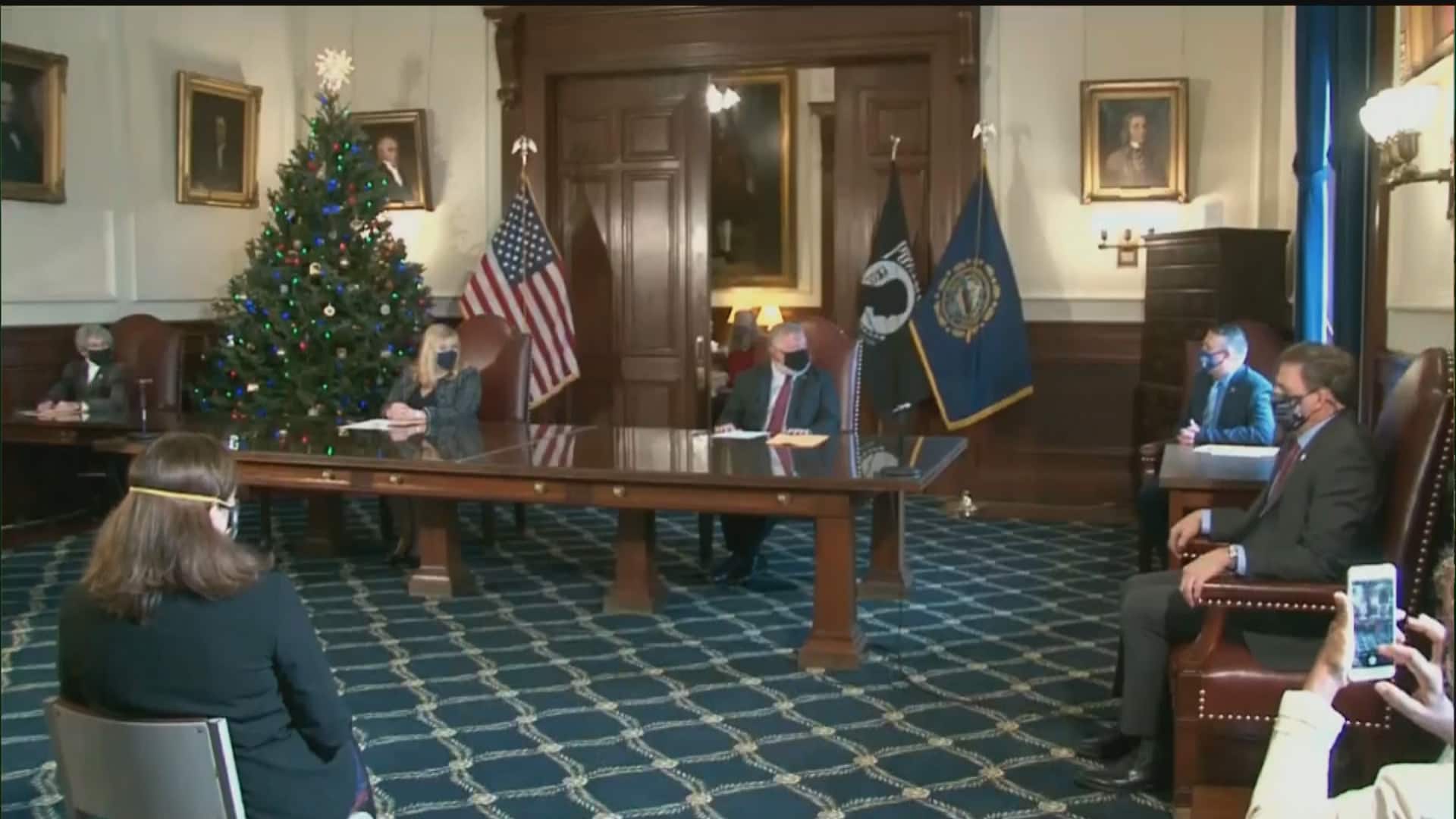 Presidential electors are meeting in all 50 states and Washington, D.C., on Monday to formally choose Joe Biden as the next president of the United States.  3:40

Threats of violence in Michigan

Legislative offices there were closed Monday in Michigan over threats of violence. The 16 electors met in the Senate chamber in a ceremony headed by Democratic Gov. Gretchen Whitmer, and by mid-afternoon, cast their votes for Biden, who reclaimed the battleground state for Democrats on his way to winning the White House.

Amber McCann, spokesperson for Mike Shirkey, the Republican senate majority leader in Michigan, said the closures were made on recommendations from law enforcement.

“The decision was not made because of anticipated protests, but was made based on credible threats of violence,” she said.

Whitmer was targeted in an alleged kidnapping plot that led to arrests in October.

Meanwhile, a Republican lawmaker was disciplined Monday for not denouncing potential violence in Michigan.

State Rep. Gary Eisen of St. Clair Township told WPHM-AM that he planned to help with an unspecified “Hail Mary” Republican plan to challenge the election, conceding the “uncharted” action likely would not change the result.

Asked if he could guarantee people’s safety, Eisen said “No.”

House Speaker Lee Chatfield and Speaker-elect Jason Wentworth, both Republicans, removed Eisen from committee assignments. In a statement, they said threats or suggestions of violence in politics are never acceptable, including “when the public officials open the door to violent behaviour and refuse to condemn it. We must do better.”

Biden to give televised address after votes occur

Biden is set to speak Monday night after the electoral college formally votes to declare him president.

He is expected to declare that “not even … an abuse of power” can stop a peaceful transition of power in the U.S. after last month’s election.

That’s an overt swipe at Trump’s refusal to accept defeat and the top Republicans who have continued to stand by him.

Trump is clinging to his false claims that he won the election, and undermining Biden’s presidency even before it begins.

“No, I worry about the country having an illegitimate president, that’s what I worry about. A president that lost and lost badly,” Trump said in a Fox News interview that was taped Saturday.

According to excerpts released by his campaign, Biden plans to call for unity and again express his intentions to be a president for everyone, regardless of whether they voted for him. But he also will say that “In America, politicians don’t take power — the people grant it to them.”

“The flame of democracy was lit in this nation a long time ago,” Biden is set to say. “And we now know that nothing — not even a pandemic — or an abuse of power — can extinguish that flame.”

Following weeks of Republican legal challenges that were easily dismissed by judges, Trump and Republican allies tried to persuade the Supreme Court last week to set aside 62 electoral votes for Biden in four states, which might have thrown the outcome into doubt.

The justices rejected the effort on Friday.

Biden won 306 electoral votes to 232 votes for Trump, well above the threshold of 270 votes needed to win. Biden was leading in the popular vote count by about seven million votes.

Even with the electoral college’s confirmation of Biden’s victory, some Republicans continue to refuse to acknowledge that reality.

Yet their opposition to Biden had no practical effect on the electoral process, with the Democrat to be sworn in on Jan. 20.

Despite Biden’s wins in Georgia, Michigan, Pennsylvania and Wisconsin, Republicans who would have been Trump electors met anyway.

Pennsylvania Republicans said they cast a “procedural vote” for Trump and Pence in case courts that have repeatedly rejected challenges to Biden’s victory were to somehow still determine that Trump had won.

But one retiring Republican from Michigan, said he is disaffiliating from the Republican Party and becoming an independent for the rest of his term.

Rep. Paul Mitchell’s decision was announced on Monday. In a letter to Republican National Committee chair Ronna McDaniel and House Republican leader Kevin McCarthy, Mitchell wrote, “It is unacceptable for political candidates to treat our election system as though we are a third-world nation and incite distrust of something so basic as the sanctity of our vote.”

He also said it was unacceptable for Trump to have attacked the Supreme Court for rejecting his team’s lawsuit and for party leaders and the House Republican Conference to participate in Trump’s efforts to get the election results overturned based on conspiracy theories.

In North Carolina, Utah and other states across the country where Trump won, his electors turned out to duly cast their ballots for him.

Former president Bill Clinton and former secretary of state Hillary Clinton, whom Trump defeated four years ago, were among New York’s 29 electors for Biden and Harris.

I believe we should abolish the Electoral College and select our president by the winner of the popular vote, same as every other office.<br><br>But while it still exists, I was proud to cast my vote in New York for Joe Biden and Kamala Harris. <a href=”https://t.co/th9qebu9ka”>pic.twitter.com/th9qebu9ka</a>

In 2016, Trump won the electoral college despite losing the popular vote to Democrat Hillary Clinton by nearly three million votes.

The formal vote earned extra attention when some Democratic activists called for electors to “go rogue” against Trump. In the end, seven electors broke ranks — choosing people like Colin Powell and Bernie Sanders — an unusually high number but still far too few to sway the outcome.

In 32 states and the District of Columbia, laws require electors to vote for the popular-vote winner. The Supreme Court unanimously upheld this arrangement in July.

Electors almost always vote for the state winner anyway because they generally are devoted to their political party. There’s no reason to expect any defections this year. Among prominent electors are Democrat Stacey Abrams of Georgia and Republican Gov. Kristi Noem of South Dakota.

The voting is decidedly low tech, by paper ballot. Electors cast one vote each for president and vice-president.

The electoral college was the product of compromise during the drafting of the Constitution between those who favoured electing the president by popular vote and those who opposed giving the people the power to choose their leader.

Each state gets a number of electors equal to their total number of seats in Congress: two senators plus however many members the state has in the House of Representatives. Washington, D.C., has three votes, under a constitutional amendment that was ratified in 1961.

With the exception of Maine and Nebraska, states award all their electoral college votes to the winner of the popular vote in their state.

The bargain struck by the nation’s founders has produced five elections in which the president did not win the popular vote. Trump was the most recent example in 2016.

Mo Brooks, a conservative Republican congressman, has vowed to file challenges when Congress reviews the vote on Jan. 6, though it is all but certain both chambers would reject his effort. Democrats control the House, while several moderate Republicans in the Senate have already publicly accepted Biden’s victory.

Biden is scheduled to be inaugurated as the 46th U.S. president on Jan. 20.