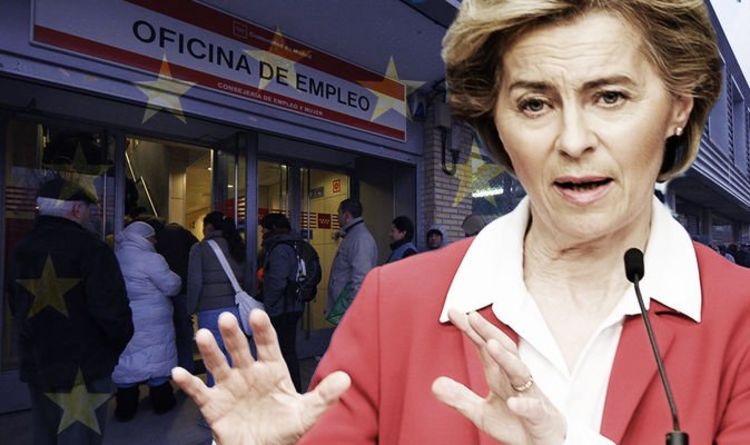 Month-on-month statistics show a 0.2 percent jump from 7.1 percent between March and April because coronavirus lockdowns across the Continent. Eurostat, the European Union’s official statistical office, estimated the bloc-wide unemployment rate to be 6.6 percent in April, up from 6.4 percent in March. It estimated that 14.079 million people across the EU are unemployed in April, an increase of 397,000 on the previous month.

In the EU’s 19-country single currency bloc there were almost 12 million unemployment cases registered, up 211,000 between March and April.

Youth unemployment has also shown a sharp increase across the bloc after years of decline.

In April, 2.8 million people under the age of 25 were without work, with 2.2 million of them living in a Eurozone country.

According to Eurostat, the EU’s youth unemployment rate was at 15.4 percent, up from 14.6 percent in March.

And in the euro area, it was found to be 15.8 percent in April, up from 15.1 percent the previous month.

Youth unemployment is more severe in some Eurozone countries, with Spain’s figure hitting 33.2 percent in April.

Figures for Greece have not been made available for March and April but are expected to be much worse than the 35.6 percent youth unemployment rate registered in February.

In Sweden, where there was no pandemic lockdown, the youth unemployment rate was 24.4 percent in April.

Oral History: The skating scandal that rocked the 2002 Winter Olympics

Oral History: The skating scandal that rocked the 2002 Winter Olympics