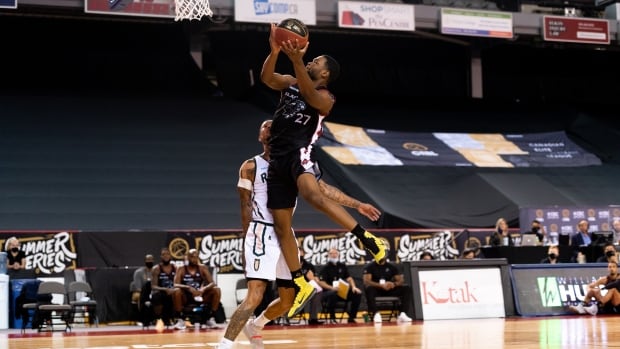 In their first big game in franchise history, the Ottawa BlackJacks did not disappoint.

The expansion CEBL club stomped the Saskatchewan Rattlers 87-68 on Wednesday with a playoff spot on the line at the Summer Series in St. Catharines, Ont.

The Rattlers’ loss means the defending champions are the first team eliminated from the tournament-style season.

A loss for the BlackJacks would have spelled the same fate. Instead, the team shook off a slow first quarter to dominate the Rattlers en route to the playoffs. It’ll be a quick turnaround for Ottawa as it takes on the Guelph Nighthawks in the quarter-finals on Thursday.

The other quarter-final will see the Hamilton Honey Badgers square off against the Niagara River Lions, while the top-ranked Edmonton Stingers and No. 2 Fraser Valley Bandits await their foes for Saturday’s semis.

The Ottawa BlackJacks beat the defending CEBL champion Saskatchewan Rattlers 87-68 to eliminate the champs from the CEBL Summer Series. 1:00

The Fraser Valley Bandits turned on the jets and earned some time off.

Guard Jahenns Manigat led with 20 points as the Bandits defeated the Guelph Nighthawks 84-70 on to secure second place and an automatic semifinal entry.

The Nighthawks (3-3), meanwhile, now face a do-or-die quarter-final game on Thursday against the BlackJacks.

It was a sluggish second half that did the Nighthawks in and cost the team extra rest, as the Bandits (4-2) raced to a 46-25 advantage in the final 20 minutes. Guelph had led by eight points at half.

Starting point guard Malcolm Duvivier also contributed 14 points and 13 rebounds to the Bandits’ cause, and Oluseyi Ashaoulu poured in 17 points combined with a terrific defensive effort.

Live coverage continues Thursday with quarter-finals, where the Honey Badgers face the River Lions at 5 p.m. ET before the Nighthawks square off against the BlackJacks at 7:30 p.m. ET.

CBC Sports has live coverage of the entire tournament, through to the final on Aug. 9.

Jahenns Manigat had a game-high 20 points to help the Fraser Valley Bandits top the Guelph Nighthawks 84-70 and advance in the CEBL Summer Series. 1:00