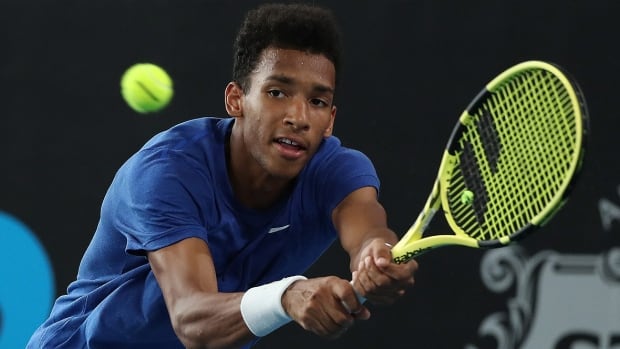 Montreal’s Félix Auger-Aliassime, who is busy preparing for the Ultimate Tennis Showdown in mid-June in France, has had his attention diverted by the rage and violence south of the border by those protesting the death of George Floyd.

While trying to digest the events of May 25 when Floyd, an unarmed and handcuffed black man, died in Minneapolis when police officer Derek Chauvin used his knee on the 46-year-old’s neck to pin him to the ground, Auger-Aliassime recalled an incident involving his African father.

Sam Aliassime sensed he was being followed one day by a police car in his Quebec neighbourhood while driving to his apartment so he pulled to the side of the road. The female officer moved behind him and turned on the police car’s lights.

“Sorry, did I commit any offence, any felony?” Sam asked. The officer said he hadn’t. “So then why am I being arrested?”

According to Félix, the officer explained it was odd or rare to see people of colour driving a Mercedes in that neighbourhood.

“So, basically telling my dad that the fact he’s an African black man and driving a Mercedes [warrants] being pulled over,” Félix said in an Instagram video.

Sam then asked the officer if anyone had reported a stolen car in the neighbour and she said, “No, it’s just a check-up, I’m just checking in.”

It wasn’t a violent encounter, Félix noted, and everything ended peacefully, “but I think it’s a story to prove that these types of events create the frustration that we’ve seen [the past week in the U.S.].”

Félix believes there are different types of discrimination and racism, including the Floyd incident, and pointed out it could be experienced by anyone, their friends, teachers and coaches.

“We’ve come a long way,” he said, “but there’s still a long way to go, in terms of equality.

“Police officers, teachers … and doctors should lead by example and not have pre-made ideas and stereotypes, in terms of skin colour and sexism.”

Since Floyd’s death, Chauvin has been fired and charged with third-degree murder and second-degree manslaughter.

It was another night of destruction on Saturday in many American cities, with people throwing bottles at officers, setting buildings on fire, burning police cars and looting stores in protest.

“I grew up in a very calm neighbourhood in Quebec City and I feel like I was privileged to get the freedom of speech and the same opportunities as everyone,” said Félix, whose mother, Marie Auger, is French Canadian. “It makes me sad every time I see people anywhere in the world that don’t get that same freedom and those same opportunities.

“This has to change so everyone gets the equal opportunities and it doesn’t [matter] the colour of your skin.

“I pray that things will get better,” Félix added, “and that all of this going on across the border will end peacefully and that everyone will just be loved.”