Anytime you’re trying to figure out the likelihood of something happening in sports, betting odds are a great place to start. The reason is simple. Those pundits you see on TV pre-game shows and Twitter might be experts, but can you really trust their predictions? They face no real consequences if they’re wrong — outside of maybe some short-term ridicule before everyone forgets and moves on to the next thing. But the betting markets? Those odds on your screen reflect the real money being risked by real people on each side. They’re backing their opinions with cold, hard cash.

The swings were unlike anything I can recall seeing with sports odds. As the first polls began to close, Pinnacle (a respected offshore bookmaker that attracts high-stakes players) was offering -240 odds on Joe Biden to win the election. That means you have to bet $240 to win $100 profit, and it implies Biden had about a 70 per cent chance of winning. Around three hours later, when it looked like Donald Trump was really rolling based on early returns, Biden’s price fell all the way to +400. That means a $100 bet nets you $400 profit, and it implies Biden had only about a 20 per cent chance of winning. A couple of hours later — when it started to become clear that a big chunk of the mail-in votes in some key states hadn’t been counted yet and that these would largely favour Biden — the Democrat’s price shot up to +135, implying around a 40 per cent chance. By this morning, Biden’s implied odds had doubled again, to around 80 per cent. Remember, Trump was at 80 percent only about 12 hours earlier.

Some stability finally arrived after that, with Biden still trading at close to an 80 per cent implied chance at our 4 p.m. publish time. But what a ride. Below is a good visual representation of the swings as reported by a bookmaking company called Betfair (note that it’s UK times listed):

At our publish time, the election still hadn’t been decided and it was unclear how long that would take. But no matter who comes out ahead, bookmakers will probably be big winners. Pinnacle said this was the most-bet event in its history. That includes Super Bowls, World Cup finals and everything else. The UK-based Betfair said that, as of this morning, it had taken in the equivalent of about $760 million Cdn in wagers on this election — double its handle from the 2016 vote.

When there’s a lot of action, that’s usually good for the books. The basic principle of the business is that you have to bet $11 for every $10 you want to win. So if the action is balanced — and the wild swings in the market last night suggest plenty of money came in on both Trump and Biden — the book pays the winners with the losers’ money and keeps that extra $1 from each loser for itself. The more bets in this scenario, the more profit for the guys behind the counter. Another reminder that, no matter what happens, they usually come out on top. Something to bear in mind if you’re thinking about jumping into sports betting as it gets more and more mainstream. 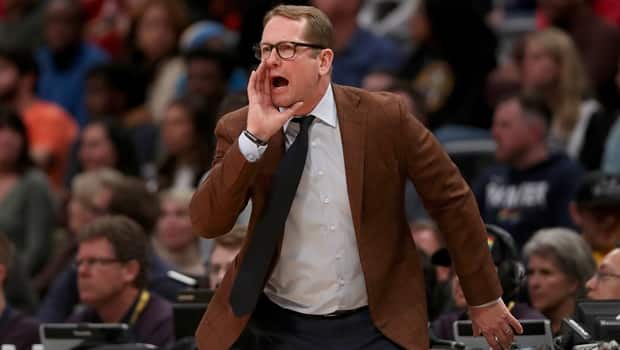 Toronto Raptors coach Nick Nurse joined CBC News’ Adrienne Arsenault to discuss the teams’ initiative to get Americans living in Canada and abroad to vote in the American 2020 election. 2:14

Speaking of sports betting getting more mainstream, people in three U.S. states voted to legalize it yesterday. In Maryland, two-thirds voted yes to a ballot question asking whether to allow “sports and events wagering at certain licensed facilities with state revenue intended to fund public education.” In Louisiana, the vast majority of the state’s 64 parishes approved sports betting in their areas, though lawmakers will now decide what form that takes. And in South Dakota, just under 60 per cent voted to approve a measure to “legalize sports betting within the city limits of Deadwood, S.D.”

Controversial WNBA co-owner Kelly Loeffler survived her election (for now). She’s the Republican U.S. Senator from Georgia who has angered many WNBA players by expressing Trumpesque views, such as her opposition to the league’s embrace of the Black Lives Matter movement. Some players, including ones on the Atlanta Dream team that Loeffler co-owns, voiced their displeasure by wearing “Vote Warnock” shirts in support of the top Democratic candidate running against her. Now, Warnock and Loeffler are headed for a Jan. 5 runoff after they finished 1-2 in their 20-person race but both fell well short of the 50 per cent vote share needed to win.

Bianca Andreescu was dealing with more than just an injury. It’s now been over a year since the Canadian tennis star’s last match. She hurt her knee pretty seriously at the WTA Finals in October 2019 but was expected to return sometime in 2020. Instead, she ended up missing the entire season and it was never clear exactly why. In an interview posted yesterday by the website Tennis Majors, Andreescu said that, in addition to the knee injury, “the virus kind of pushed me back, and some little personal things here and there, but right now I’m good.” She added that she’s “perfectly healthy” now and “just really wanted to take time to build everything in my life.” Andreescu also said she’s “training hard” at her home in Monte Carlo and will “100 per cent” be at the Australian Open, which starts Jan. 18. Read more here.

Tonight and tomorrow on CBC Sports

Women’s golf: The opening round of the Korean LPGA Tour’s Hana Financial Group Championship is streaming live here from midnight-3 a.m. ET, with a replay here from noon-3 p.m. ET.