Inside Trump and Biden’s efforts to woo the seniors’ vote in Florida, a key election battleground

Inside Trump and Biden’s efforts to woo the seniors’ vote in Florida, a key election battleground

Clay Batchlett, retired in Florida, leans back in the driver’s seat of his golf cart, lined up for a Mike Pence rally.

“I don’t believe polls. I don’t believe none of that stuff. They’re nuts,” said Batchlett, who moved to the central Florida community from Bucks County, Penn.

“The only way Biden’s going to win is they steal it. They have to, that’s the only way.”

Florida is a fierce electoral battleground. Wins and losses are razor thin, and 29 electoral votes are at stake — the third highest amount in any state.

Donald Trump beat Hillary Clinton in the state by just over one per cent in 2016, propelling him to the White House. It’s expected the 2020 result will be similarly tight.

Trump is relying on loyal seniors like those in The Villages, staunchly Republican and proud of it, to help ratchet up votes to blunt support for Democratic contender Joe Biden.

Joanne Anderson, originally from Minnesota, pauses to chat as she waits for the sniffer dogs to go around her cart for security, said she’ll vote for U.S. President Donald Trump and approves of his management of COVID-19.

“Do we look worried?” she said, laughing. “I think he’s done a fine job with COVID.

“It’s so easy, Biden and [Kamala] Harris playing Monday morning quarterback.… [They] wouldn’t have shut down the country in February. Are you kidding me?”

WATCH | Trump and Pence compete for seniors’ votes in Florida: 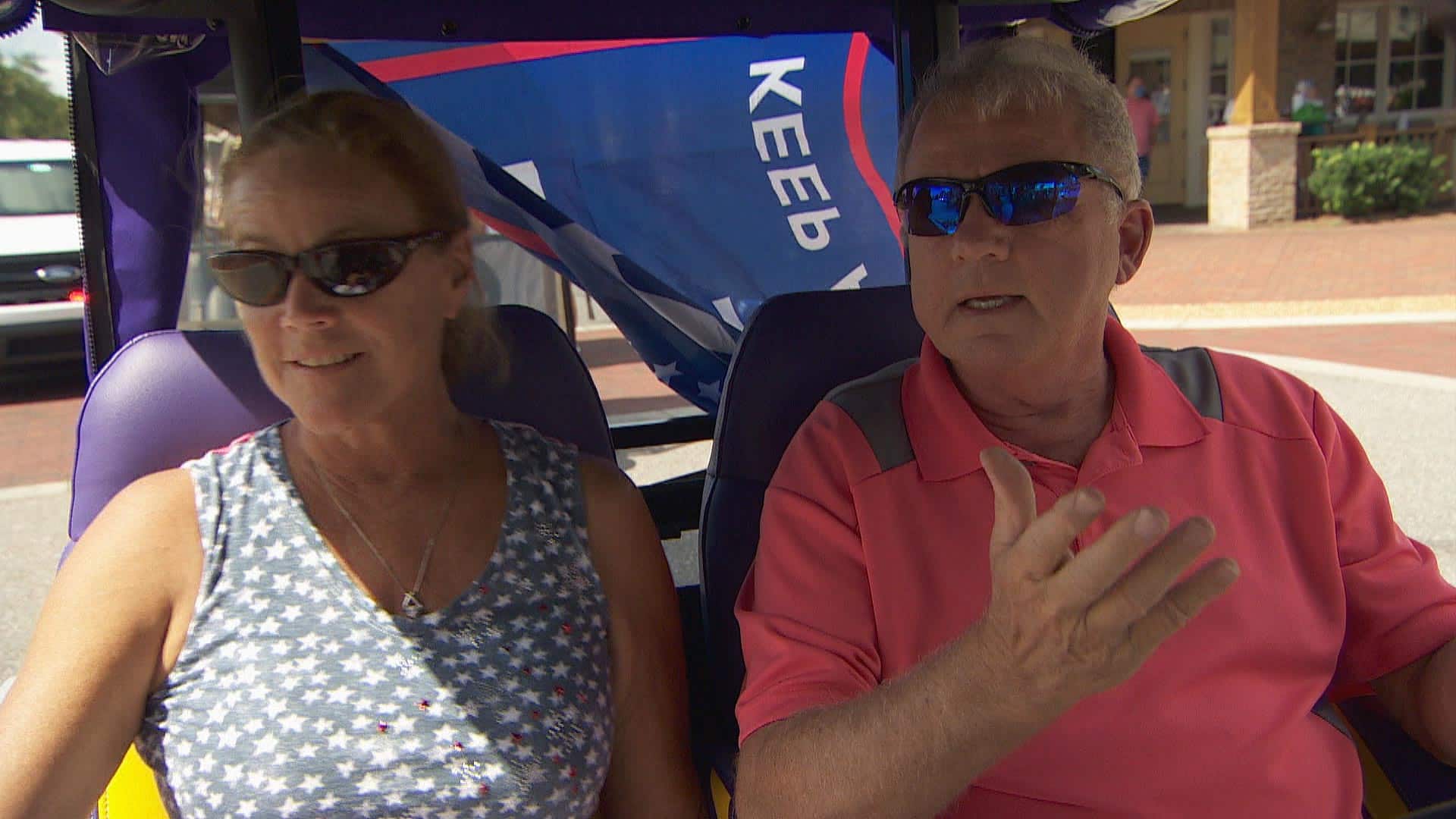 Florida will be a key state if U.S. President Donald Trump wants to be re-elected in November and support from seniors is crucial, but concerns about social security and health care are pushing more people towards Joe Biden. 4:58

Florida is key to Trump’s victory, and Biden is slightly ahead in the average of most recent polls.

For the first time in four elections, Democrats are doing better nationally with seniors. Biden tops Trump by an average of 10 points among seniors all year in polling done by The Wall Street Journal/NBC News for this presidential election.

In 2016, by contrast, Trump won the seniors’ vote by seven percentage points nationally.

But Bobbie and George Edwards who retired from Atlanta, Ga., to The Villages, believe the president’s support is just as strong this time among seniors.

She narrows her gaze. “God has his hand on him.”

The couple, both in their 80s, were up dancing in a parking lot on a stifling hot afternoon waiting for Pence to arrive for his outdoor rally at The Villages.

“Four years ago, the polls gave him no chance to win,” Bobbie said. “A lot of money was spent on the other side, and Trump won. He’ll win again.”

George Edwards, who is 84, comes from a long line of Democrats, but he and his wife have recently shifted.

“They [Democrats] just want to make this a socialist country,” he said. “They went so far to the left … they went so Liberal.”

But the Trump team knows there’s a shift underway with seniors, which has Trump’s campaign rushing to lure them back.

Two weeks ago, while he was still recovering from COVID-19, Trump recorded a video just for seniors on the back lawn of the White House.

“To my favourite people in the world — the seniors — I’m a senior you probably don’t know that,” he said, waving wide as if to embrace the idea.

“We are making tremendous progress with this horrible disease which was sent over from China; China will pay a big price.”

But even in The Villages — deep red and reliable — Democrats are showing their colours.

“We say it as a joke, but it’s true. I would have a bumper sticker on my car and someone would tiptoe over and say, ‘I’m a Democrat too,'” said Chris Stanley, chair of The Villages Democratic Club.

On a recent weekend, about a hundred Democrats sat in the stands at the Villages’ square and recorded a video Vote Trump Out, and Dump Trump.

“If Trump wins Florida, then Trump has a shot at winning the country,” Stanley said. “But if the seniors turn out here in Florida as expected and vote for Joe Biden, then Trump will not win.” 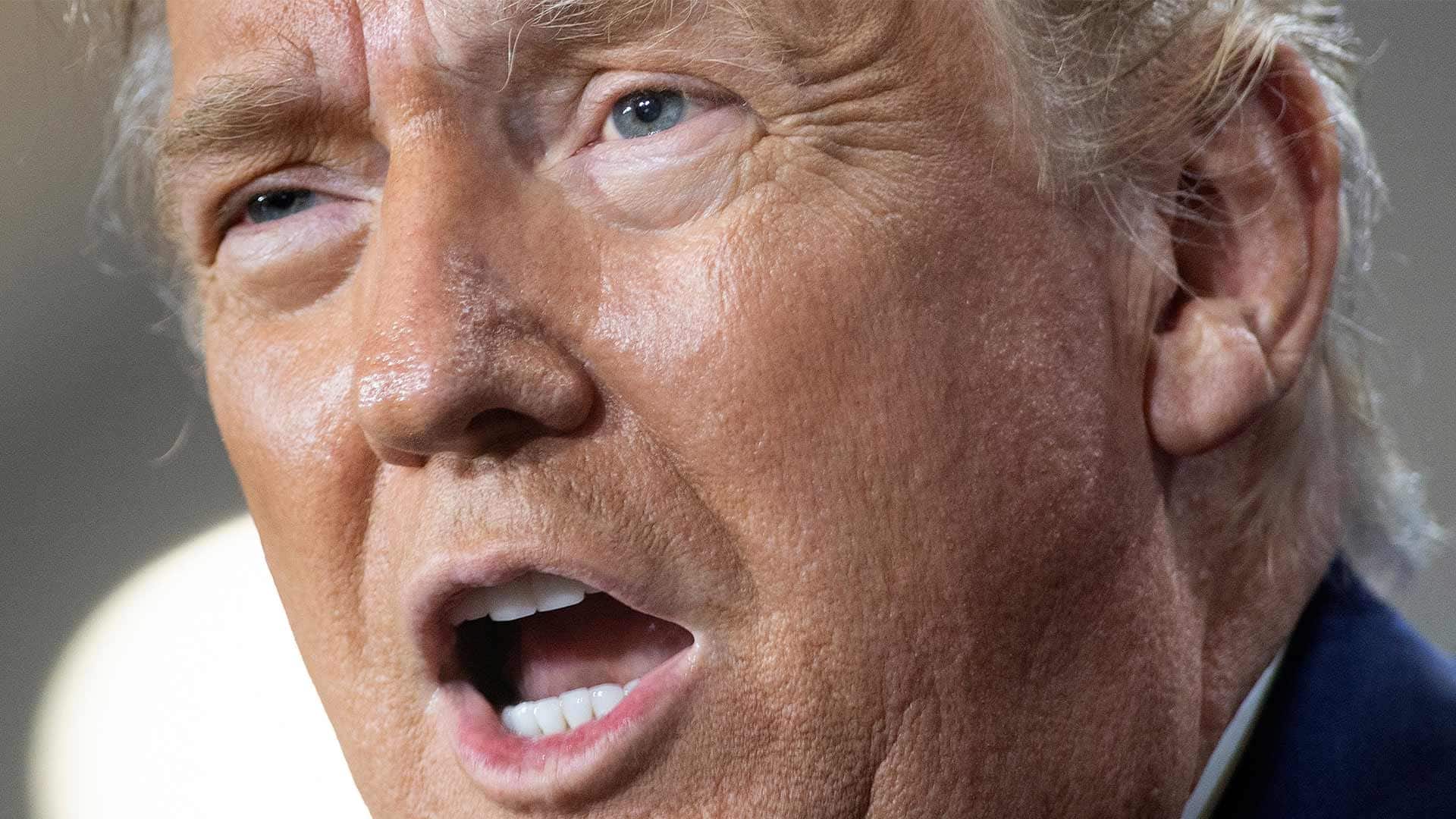 Donald Trump rallies support from seniors in Florida, saying they’ll be first in line for a vaccine and suggests “the light at the end of the tunnel is near” on the COVID-19 pandemic. 1:53

No one issue will sway seniors’ vote

In conversations with multiple elderly Americans, one overriding reason why some seniors are shifting to Democrats does not emerge.

Many say they are fed up and angry with Trump’s mismanagement of the coronavirus, but they’re also worried about their social security and maintaining health care.

There are other less tangible reasons, says Arlene Macellaro, a registered Republican who is defecting to Biden this time: “Decency.”

“It seems like the thing to do in my Republican Party is to be angry and to put people down and to not be accepting of their views,” said Macellaro, who is 66.

“I hate to say it as a Christian, but to worship a man instead of having respect for a man who’s leading this country. And so Donald Trump’s the reason I am not voting with the Republican Party.”

Macellaro’s husband was a staunch Republican who never wobbled. But just before he died last January of cancer, he told Arlene he wouldn’t have voted for Trump in 2020. She didn’t believe him, but he assured her that it was true.

A University of North Florida poll released this week says six per cent of Florida voters who voted with Trump in 2016 say they’ll vote Democrat.

That may not seem like a lot, but Florida is a one per cent state — meaning it turns on a sliver of the vote, so even a small shift is significant.

Donna and Roger in The Villages (they asked that their last name be left off out of concerns for unwanted attention), recorded a video for Biden’s campaign in August saying the coronavirus had kept them from seeing their grandchildren.

“I don’t get to because Donald Trump didn’t react in the way he should have right from the beginning; he didn’t listen to the scientists,” said Donna, who is 70.

But once the ad was released, Trump enthusiasts, neighbours, even friends reacted strongly.

“Pretty nasty, and I won’t go into it. But there were words,” she told CBC News, emotion welling up.

“And the only thing I can figure out is it scared Republicans because it’s true.”