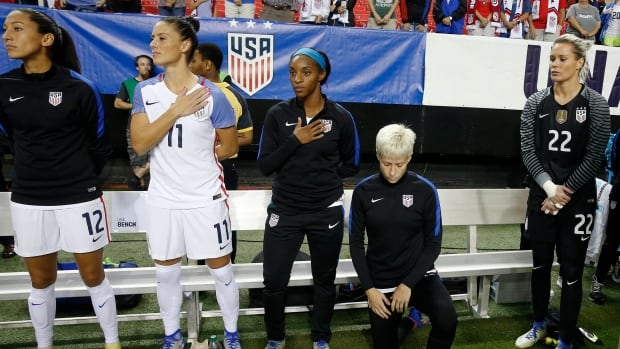 The U.S. Olympic and Paralympic Committee is creating an athlete group that will look into loosening restrictions on protests at the games.

CEO Sarah Hirshland tweeted the plans for a new group, which is being formed in response to George Floyd’s death last month and the worldwide protests that followed.

Floyd, a Black man, died May 25 after a white Minneapolis police officer pressed his knee into Floyd’s neck while Floyd was handcuffed and saying that he couldn’t breathe.

The USOPC has consistently cited the IOC’s Rule 50, which bans inside-the-lines protests at the Olympics, as a reason for its own position barring such protests. The IOC reiterated its support of the rule earlier this year and has not given any indication about changing it, confirming to The Telegraph on Tuesday that “the guidelines are still in place” against protests.

The USOPC put out a statement last week signalling its solidarity with Black athletes, but received blowback from several athletes, most notably hammer thrower Gwen Berry, who is serving a 12-month probation for raising her fist on the medals stand at the Pan Am Games last summer.

The most famous Olympic protest came at the 1968 Mexico City Games, when sprinters Tommie Smith and John Carlos raised their fists on the medals stand. They were sent home from the games, and were largely cast out of the U.S. Olympic family for decades. Berry pointed that out in an op-ed piece published by Around the Rings on Tuesday.

“It’s therefore fair to ask the question: who does the USOPC really care about?? The athletes or their sponsors??” Berry wrote.

Today, I am creating an athlete-led group to challenge the rules and systems in our own organization that create barriers to progress, including your right to protest. All Team USA athletes who are interested in participating are welcome. <a href=”https://t.co/uBnUV3WvEL”>pic.twitter.com/uBnUV3WvEL</a>

Hirshland, who held a pair of town-hall video meetings with athletes last week, said in announcing the new group that the USOPC was moving “to match your courage. To listen and to understand. To accept that addressing racial injustice is everyone’s concern, every day … and to empower Black voices to be heard.”

The decision to create a new group to look into the matter was criticized by the athletes’ rights group, Global Athlete, which portrayed the move a s undercutting the USOPC’s own athlete advisory committee. Representatives from the committee did not immediately return emails from The Associated Press seeking comment.