‘It was a next-level experience’: Canada’s Kate Bazeley on World Marathon Major debut

‘It was a next-level experience’: Canada’s Kate Bazeley on World Marathon Major debut 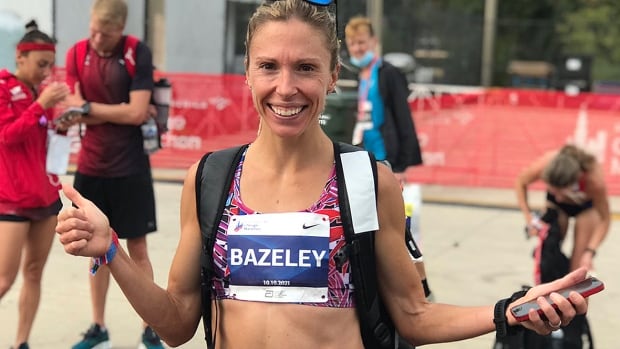 Kate Bazeley will have to wait until next spring, at least, to run her dream race.

The St. John’s native made her World Marathon Major debut on Sunday in Chicago and placed 16th in the elite women’s field over 42.2 kilometres in two hours 36 minutes 46 seconds, or 11 seconds short of her personal-best time.

Bazeley told CBC Sports the energy from a large gathering of spectators along the entire course on a humid and windy morning was something she didn’t experience in her previous three marathons.

“It was so exciting, definitely a next-level experience,” said the 37-year-old. “It took about 5K to relax because the start was so intense. When the [start] gun went off, everybody was flying and you’re trying not to run into anybody or get knocked around.

“We were all a bit surprised how gusty it was and, of course, it was warm [23 C at race time]. I’m happy with 16th and I think I ran the best I could for the [conditions]. For the dream race everything has to align. One day.”

I never felt amazing from the start as I had hoped but didn’t feel any worse [as the race progressed] so that was a positive.— Canadian runner Kate Bazeley on the Chicago Marathon, her 1st World Marathon Major

“The race was good — it was nice but it was tough. To push alone is not easy,” said Chepngetich, who set the world record in the half marathon earlier this year in Istanbul. “I just focused and I believed in myself.”

Bazeley was on track for a 2:37 finish through 35 km before she picked up the pace in the final stretch and came narrowly close to matching her 2:36:35 effort from the Toronto Waterfront Marathon on Oct. 20, 2019.

“I kept thinking [on Sunday] we’re going to get a tailwind and it fell like a challenge the whole way,” said Bazeley, who began competitive running at age 18 but didn’t train properly until her mid-20s. “I never felt amazing from the start as I had hoped but didn’t feel any worse [as the race progressed] so that was a positive.”

To combat the heat, Bazeley filled her shorts and race top with ice at the start line, drank water with an energy gel every 5K and grabbed one to three cups at each water stop to pour over herself.

Bazeley had pointed out pre-race she was “definitely” in better shape to run a marathon than two years ago and was hopeful of a 2:30 to 2:32 finish despite the fact she trains 40 to 50 less than a runner of similar calibre — according to coach Jon Brown — while balancing life as an athlete and being a mother to eight-year-old Amelia, Anna, 6, and Molly, 4.

“It was the marathon I felt most prepared for so I was trying to have positive thoughts, even when the negative ones would creep in when you’re hurting in the middle of the race,” Bazeley said, laughing. Her husband, Peter, made the trip with her about 10 years after he ran the Chicago Marathon.

Bazeley said she’ll attempt to run the Boston Marathon, scheduled for April 18, but quickly noted the Jan. 16 Houston marathon or half marathon is also appealing.

“I’m familiar with the [Houston races], it’s fast and the temperature’s always amazing,” she said. “I definitely have to run another marathon because I’m not satisfied with [Sunday’s performance].”

Meanwhile, Ethiopia’s Seifu Tura won Sunday’s men’s race in 2:06:12 and held off Galen Rupp of the United States for his first major title. Rupp was second (2:06:35) while Eric Kiptanui of Kenya clocked 2:06:51 for third.

“I just was determined to fight to the very end to my best,” Tura said via a translator. “There was a breeze and the first half was not too fast and that helped me.”

Rupp, who won the bronze medal at the 2016 Rio Olympics and finished eighth in Tokyo this past summer, said the performance was a welcome return to form after “a long couple years.” He dropped out of the Chicago Marathon in 2019 just before the 23-mile mark with calf strain after recovering from Achilles surgery.

“This was really a great step in the right direction for me,” said Rupp. “To run as fast as I did and be right there, competing for a win, that’s where I want to be.”