Einarson, third Val Sweeting, second Shannon Birchard and lead Briane Meilleur from Manitoba’s Gimli Curling Club defeated Homan in the Scotties Tournament of Hearts final for the second time in as many years.

Last year, Einarson had to make a draw with her final shot in an extra end to claim her first championship in Moose Jaw, Sask. But on Sunday in Calgary, the skip didn’t have to throw her final stone.

Einarson lay two counters in the rings when Homan was too deep on an attempted freeze.

The COVID-19 pandemic had Einarson’s rink celebrating a second championship in an otherwise quiet arena without spectators.

Homan has lost three straight Hearts finals, including a loss to Chelsea Carey in 2019. 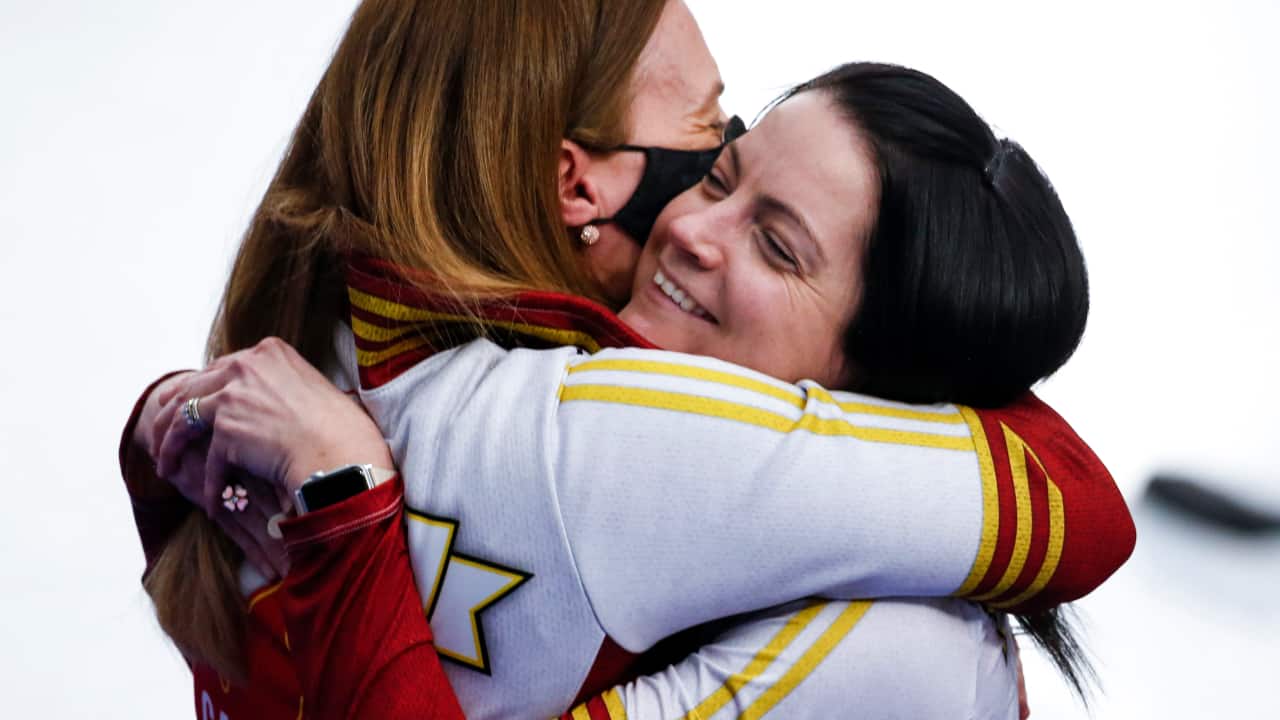 Gimli, Manitoba’s Kerri Einarson and Team Canada won their second Scotties Tournament of Hearts with a 9-7 victory over Rachel Homan and Team Ontario. 0:57

Einarson’s team retained the Maple Leaf as Team Canada for the 2022 national championship in Thunder Bay, Ont., and picked up $100,000 in first-place prize money.

But for the second year in a row, Einarson won’t play for a women’s world championship.

The World Curling Federation cancelled the March 20-28 tournament in Schaffhausen, Switzerland, because local health authorities would not support it in a global pandemic.

Einarson and her teammates had arrived in Prince George, B.C., for the 2020 world championship and immediately headed home when the pandemic brought international sports to a standstill.

The WCF pulled the plug Feb. 8 on this year’s championship, so Einarson and company knew before their first game in Calgary they would again be denied the chance to play for a world title if they repeated.

Familiar foes in the final

Another Einarson versus Homan matchup for the title marked the first time in the 40-year history of the Tournament of Hearts that the same two teams met in the championship game in back-to-back years.

Homan and her team struggled to read the ice, but stole two points in the ninth to draw even with Einarson.

But Homan scored a single point in the eighth and stole the deuce in the ninth when Einarson opted for a tricky raise instead of a hit to concede a single point.

Einarson beat Alberta’s Laura Walker 9-3 in the afternoon semifinal to set up a showdown with Homan. Walker earlier eliminated six-time champion Jennifer Jones of Manitoba with a 9-8 win in a morning tiebreaker.

The Hearts was the first of four Curling Canada events shifted to a spectator-free, controlled environment at WinSport’s Markin MacPhail Centre in an effort to have a season and get curling on TSN.

Another two Grand Slam events, which are Rogers Sportsnet properties, are planned for later in April.

Tourism Calgary predicts the six curling events in Calgary will inject $11 million into the local economy.

They arrived in Calgary with a few games played this winter, and depending on pandemic restrictions in their region, little practice time at their local clubs.

Homan, who is pregnant and due in April, lacked ice time to adapt her stone delivery to her changing body before arriving in Calgary.

Ontario also incorporated lineup changes on the fly at the Hearts. Homan dropped longtime lead Lisa Weagle last year to bring Sarah Wilkes on board at second and shift Joanne Courtney to lead.

They didn’t have the benefit of 50 games to re-establish chemistry and communication.

Einarson’s advantage was an unchanged lineup from the team that had bested Homan a year earlier.

Einarson, Sweeting and Birchard were named to the tournament’s first all-star team at their positions with Manitoba lead Lisa Weagle breaking up an Einarson sweep of selections.