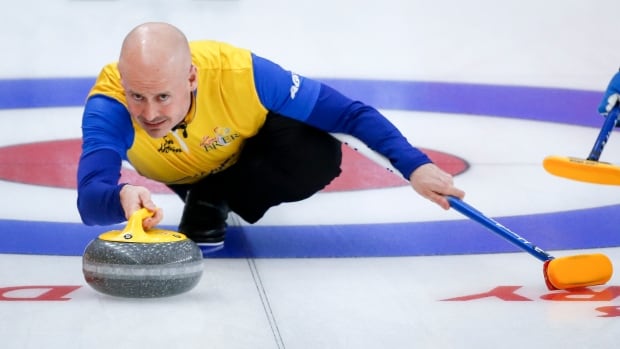 Kevin Koe moved closer to a playoff spot at the Canadian Olympic curling trials with a 8-7 win over Jason Gunnlaugson in Friday’s early draw.

Canada’s representative at the 2018 Games, Koe kept alive his hopes of a second straight Olympic appearance when he scored two in the 10th end for the critical victory.

Koe (5-2) moved into sole possession of third spot in the men’s standings with the win and Mike McEwen’s 9-5 loss to Brad Jacobs.

McEwen’s foursome fell to 4-3 and needs a win over Brad Gushue and a Koe loss to John Epping in Friday’s final draw in order to force a tiebreaker for the third and final playoff spot.

Jacobs and Gushue have clinched playoff spots and head into the final draw at 6-1. Gushue was idle in Friday’s morning draw.

The top three teams in each competition will make the playoffs.

Tracy Fleury (7-0) has clinched top spot in the women’s round-robin competition and will have the hammer in the women’s final. Jennifer Jones (5-2) is also assured of a playoff spot.

Kerri Einarson (4-3) can claim the final playoff spot with a win over Kelsey Rocque in the afternoon draw,

Tiebreakers (if needed) and semifinals will be played Saturday.