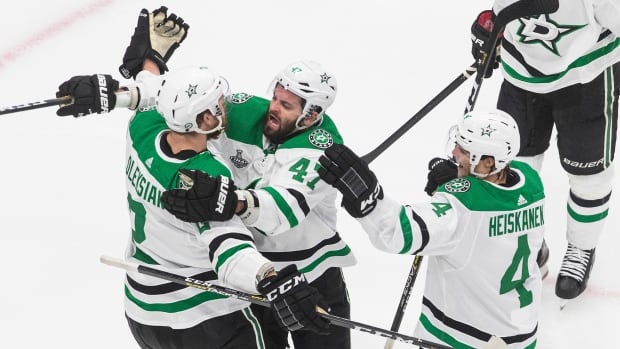 The Tampa Bay Lightning are the latest team in the NHL playoffs to discover how much the Dallas Stars’ defence can be, well, downright offensive.

The Stars scored twice via defenders jumping into the play en route to a 4-1 win over the Lightning in Game 1 of the Stanley Cup final.

Dallas head coach Rick Bowness calls it a high-risk, high-reward strategy change born out of necessity in the modern game.

“We had to change the way we were playing with the puck,” Bowness told reporters Sunday on a Zoom call.

“Since we went to [return to play training] camp on July 11 that was the focus, and it continues to be the focus.

Dallas is three wins from the Stanley Cup in a playoff run powered by the offensive production of defenders like Miro Heiskanen, John Klingberg, and Jamie Oleksiak.

Heiskanen, 21, is the team’s top playoff point-getter, with five goals and 18 assists. Klingberg is tied for third (three goals, 17 points). Oleksiak has five goals in 22 playoff games after never getting more than five in any regular season in his eight-year NHL career.

WATCH | Oleksiak buries his own rebound:

Jamie Oleksiak’s tally in the opening game of the Stanley Cup Final was enough for Dallas in their 4-1 victory over Tampa. 1:02

Bowness said the strategy carries high risk if everyone isn’t in sync. The forwards have to gain the zone and dish the puck and fill the gap when the defence activates. If a player loses the puck or doesn’t rotate, the dominoes can fall on a disastrous odd-man attack headed at high speed the other way.

“Some nights it’s there, it works, and some nights it doesn’t. But they’re coming,” said Bowness.

“We’re after our D all the time to keep coming, and when that happens you’re putting a lot of onus on the puck carrier to make the right decisions.

“We’re here where we are because of the play of our defence and their chipping in offensively when they have to.”

With Dallas, the defence can play offence, but the offence can also hustle back and play defence, as evidenced in the third period of Game 1. Tampa Bay found its legs in the final frame and leveraged three Dallas minor penalties to blitz Anton Khudobin with 22 shots on net in 20 minutes.

Khudobin stopped them all, but credited teammates with clearing out rebounds and stopping pucks at the point of attack. The Stars allowed 35 shots on Khudobin in total but blocked another 26.

In his daily recap, Rob Pizzo break down an event-filled Game 6 in the East, and previews the Dallas-Tampa Cup final. 3:40

Dallas forward Jason Dickinson said they are succeeding in keeping shots to the perimeter and collapsing in on the net when pucks got through.

“We’re all on the same page. We don’t get running [around]. When we’re in doubt we pack it in and we’ll expand from there and protect the house first,” said Dickinson.

“When it does open up, we have [Khudobin] there to shut the door for us.”

Khudobin, a journeyman backup in his 11th season, is having a storybook post-season, starting 19 games for an injured Ben Bishop and racking up 13 wins. Against the Vegas Golden Knights in the Western Conference final he allowed just eight goals on 161 shots for a .950 save percentage.

But Bowness said even keeping shots at a long distance is not good news.

“When we’re seeing that, we’re on our heels and that’s not how we play the game. We play the game on our toes going north,” he said.

The Lightning have yet to lose back-to-back games in this post-season, which has seen teams play in so-called isolated bubbles in Edmonton and Toronto to prevent contracting the coronavirus.

Tampa ready to strike back

“Nobody is proud of the way we played, and we have a very proud group,” said Coleman.

“I expect every guy to look in the mirror and bounce back and play better than they did in Game 1.”

Looming over the series is the question of whether former two-time league scoring champion and Lightning team captain Steven Stamkos will return.

Stamkos has been out since March after undergoing surgery for a core muscle injury. He’s skating with the team in practice.

Will he play in Monday’s Game 2? Tampa head coach Jon Cooper was asked.

“I guess there’s always a chance, but as of now I don’t think so,” Cooper replied.

Bowness said they’re planning for him: “We’re expecting Steven to play at some point.”