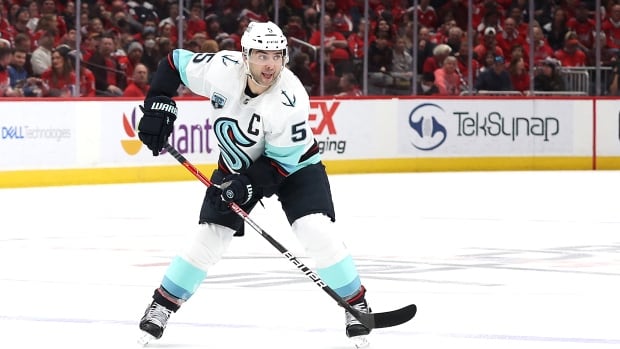 The Maple Leafs acquired the veteran defenceman and Toronto native along with centre Colin Blackwell from the Seattle Kraken on Sunday for two second-round draft picks and a third-round selection.

Giordano should provide grit, responsibility in his own zone and leadership to a blue line that also recently added the hard-nosed Ilya Lyubushkin in a trade with the Arizona Coyotes, and is hoping to get Jake Muzzin back from a concussion before the end of the regular season.

As part of the deal, Seattle is retaining 50 per cent of Giordano’s $6.75-million US salary cap hit for the remainder of the 2021-22 campaign.

The Kraken then named Giordano, who has six goals and 23 points in 55 games this season, as the franchise’s first captain.

The NHL trade deadline is set for Monday at 3 p.m. ET.

The Leafs also made another move Sunday, shipping depth defenceman Travis Dermott to the Vancouver Canucks for a third-round pick in 2022.

Giordano, who also served as Flames captain, will be greeted by at least one familiar face in Toronto’s locker room after spending plenty of time lined up alongside Leafs defenceman T.J. Brodie in Calgary.

Toronto general manager Kyle Dubas told reporters earlier this month his focus would be on trying to upgrade the team’s back end.

Giordano, who won the Norris Trophy as the NHL’s top defenceman at age 35 in 2019, has registered 149 goals and 532 points in 1,004 regular-season games with the Flames and Kraken. He added seven points (one goal, six assists) in 23 playoff contests for Calgary.

The Kraken received second-round picks in 2022 and 2023 along with a third-round selection in 2024 as part of the deal.

The trade with Seattle marks the second time in as many seasons the Leafs have acquired another team’s captain one day prior to the deadline after grabbing Nick Foligno from the Columbus Blue Jacket last year.

Toronto, which hasn’t won a playoff series since 2004, currently sits third in the Atlantic Division, one point back of the second-place Tampa Bay Lightning and two up on Boston.

Sateri, 32, has played the past three seasons for Novosibirsk Sibir of the Kontinental Hockey League and was in goal for Finland when it won the Olympic gold medal last month. He turned aside 127 of 132 shots in winning five games for Finland.

Sateri previously played with the Florida Panthers, posting a 4-4-0 record with a 2.92 goals-against average in nine games during the 2017-18 season. He spent the following campaign with Grand Rapids of the American Hockey League before moving to Russia.

Mrazek has played in 17 games (15 starts) for the Maple Leafs with a 10-6-0 record with a 3.48 GAA and .884 save percentage. He has allowed at least four goals in each of his four appearances this month.

In other trade news, the Ottawa Senators have acquired defenceman Travis Hamonic from the Vancouver Canucks for a third-round pick in the 2022 NHL draft.

The 31-year-old had three goals and four assists in 24 games with Vancouver this season.

Hamonic has registered 43 goals and 205 points in 699 regular-season contests with the Canucks, New York Islanders and Calgary Flames. He has one goal and three assists in 22 playoff games.

The third-round pick heading to Vancouver in the deal announced Sunday originally belonged to the Canucks before it was traded to the Vegas Golden Knights and subsequently flipped to the Senators.

Hamonic signed a $6-million, two-year contract with the Canucks in July.

The Senators made another move later in the day, shipping Nick Paul to Tampa Bay for forward Mathieu Joseph and a fourth-round pick in 2024.

Mason Appleton is back with the Winnipeg Jets.

The Jets have acquired forward Appleton from the Seattle Kraken for a fourth-round pick in the 2023 NHL draft.

The 26-year-old from Green Bay, Wisc., had six goals and 11 assists in 49 games for the Kraken this season. He was selected by Seattle in last year’s NHL expansion draft.

Appleton returns to Winnipeg, the team that drafted him in the sixth round (168th overall) in 2015.

He played the first 138 games of his NHL career with the Jets, scoring 20 goals over three seasons/