Meet Mapletron: Why Chase Claypool could become the best Canadian NFL player ever

Meet Mapletron: Why Chase Claypool could become the best Canadian NFL player ever 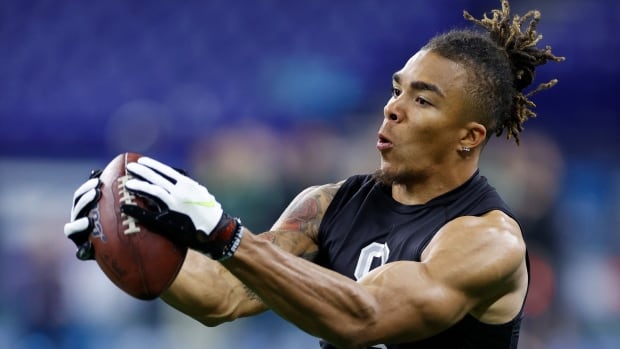 On Sunday afternoon in a mostly empty stadium in Pittsburgh, a largely unknown 22-year-old NFL rookie from Abbotsford, B.C., scored four touchdowns — three receiving, one rushing — to help the undefeated Steelers to a 38-29 win over the Philadelphia Eagles.

In many ways, what Chase Claypool did was a fluke. A lot has to go right for even the best players to reach the endzone four times in one day. It’s happened eight times in the NFL in the past five years, and no rookie has done it since 2012.

But the man himself is no fluke. It may seem extremely early to say this about someone who’s four games into his pro career, but Claypool has all the ingredients to become the greatest NFL player Canada has ever produced. Here’s why:

Claypool played four years at Notre Dame, which is not what it used to be but is still one of the better football programs. In his senior season last year, he put up monster numbers: 66 catches for 1,037 yards and 13 touchdowns in 13 games.

Plenty of guys post impressive college stats and are never heard from again. NFL football is a different game. The players are bigger and stronger and yet somehow also faster, smarter and more athletic than they are in college. But what drew pro scouts to Claypool — and compelled Pittsburgh to use their second-round draft pick on him — was that he combined those big numbers at Notre Dame with NFL-grade physical traits.

In fact, even by the superhero-like standards of the NFL, Claypool’s body and athleticism stand out. At the scouting combine held before his draft, he measured in at 6-foot-4 and 238 pounds and ran the 40-yard dash in an astonishing 4.42 seconds. Only one man at least that tall and at least that heavy has run that fast in the history of the combine: Calvin Johnson, who’s one of the best receivers in history and was such a renowned super-human physical freak that he was nicknamed “Megatron.” After Sunday’s performance, some have started calling Claypool “Mapletron.”

“He has got some God-given abilities that not many people in this world have,” veteran Steelers quarterback Ben Roethlisberger said. “He’s big, fast and strong and he’s very, very smart.”

NFL history is littered with players who had the body of a Greek god and put up jaw-dropping workout numbers but never developed the technical precision required to achieve true greatness. Like any rookie, Claypool still has work to do in that department. But his impressive college stats suggest he came into the pros with a solid foundation, and he put his impressive skill set on display in the four-touchdown game.

Two of Claypool’s TDs on Sunday, including the run, came on plays that started within five yards of the end zone and were mostly the result of excellent play designs and blocking. It says something that the Steelers’ coaches chose to give him the ball on those plays. But any reasonably skilled receiver or running back probably could have done the job.

The other two touchdowns better showcased Claypool’s tantalizing combination of athleticism and technical skills. He used those to get open against his primary defender, secure the catch and finish the play all the way to the endzone. His second TD of the day was the most impressive. On that one, he beat the man pressing him at the line of scrimmage with some excellent footwork to get wide open immediately and catch Roethlisberger’s pass. A safety moved in to stop him, but Claypool roasted him with a quick lateral move, turning what should have been a nice 15-yard gain into a 35-yard, highlight-reel touchdown.

CBC Sports’ Dion Caputi, who’s an expert on NFL prospects and has covered the draft for years, likes what Claypool has shown so far. He’s also bullish on the receiver’s chances to get even better because of the “commitment and work ethic” that’s evident when studying tape of Claypool.

“There’s no degree of randomness to [his success] either,” Caputi says. “He’s exhibiting a real penchant for breaking press coverage at the hands of many big, physical modern NFL boundary corners he tends to be matched against.

“He creates his own opportunities with savvy route-running ability but can rely on his vertical skills and length to compensate when adjustments are required.”

Read more about Claypool in this story by Dion.

Claypool really lucked out when Pittsburgh drafted him. Besides being one of the best-run and most consistently successful franchises in football, the Steelers have an outstanding track record in developing receivers they drafted outside the first round. Antonio Brown, JuJu Smith-Schuster, Heinz Ward and Mike Wallace are among the middling prospects Pittsburgh has cultivated into stars in recent years.

Better yet, this year’s Steelers team surrounds Claypool with talent. Roethlisberger is in his twilight, but he’s a future hall-of-fame QB who still likes to sling it around. Smith-Schuster is a good No. 1 receiver, James Conner a solid running back and the offensive line is strong (a Steelers trademark). The defence is among the best in the NFL, so it’s often getting the ball back in the offence’s hands quickly. And Mike Tomlin is one of the most respected head coaches in the league.

To be honest, Canada has not produced a ton of good NFL players. Yes, Super Bowl MVP quarterback Mark Rypien, receiver Nate Burleson and two-way legend Bronko Nagurski were all born in Canada. But they moved to the States when they were toddlers, so we can’t really give the Canadian football system credit for their success.

As far as NFLers who were actually born and raised in Canada, many of the standouts are kickers. Eddie Murray was named a first-team All-Pro after his rookie season with Detroit in 1980, won the Super Bowl following the ’93 season with Dallas and stayed in the NFL into his mid-40s. Steve Christie, also an All-Pro as a rookie, spent 15 years in the league, hit numerous clutch kicks to help Buffalo win the last two of its four consecutive AFC titles and still holds the record for longest field goal in Super Bowl history. Another Oakville, Ont., native, Mike Vanderjagt, was for a time the most accurate leg in NFL history before the “idiot kicker” wore out his welcome with Peyton Manning and the Indianapolis Colts.

Honourable mention, as well, to defensive lineman Israel Idonije, who had a solid decade-long career (mostly with Chicago) in which he totalled 29 sacks, topping out with eight in 2010. And also to Kansas City offensive lineman Laurent Duvernay-Tardif, a key member of the unit that protected Super Bowl MVP Patrick Mahomes last year. The aspiring medical doctor opted out of this season to continue his work on the front lines of the fight against the pandemic in his native Quebec. His greatness clearly extends beyond the gridiron.

No disrespect to kickers and linemen — they’re unfathomably good at what they do. But they’re generally not stars. Football fans (especially casual ones) focus on the so-called “skill positions”: quarterback, running back, receiver, tight end. Those are the guys who rack up points for your fantasy football team, whose names go on replica jerseys, who get the cute insurance-company commercials.

Considering that, the bar Claypool needs to clear to be considered Canada’s greatest-ever NFL player is probably Rueben Mayes. The running back from North Battleford, Sask., had a phenomenal first season for New Orleans in 1986, rushing for 1,353 yards and eight touchdowns to win the offensive rookie of the year award. But his production tailed off after that and his career was cut short by injuries. Mayes was a significant player for only four seasons, finishing with 3,484 yards rushing, another 401 receiving and 23 touchdowns.

Mayes is also something of a cautionary tale for those hyping Claypool (like, for example, this newsletter). Pro football is an exciting but brutal way to make a living. Even the most talented and toughest players are always one snap away from a career-threatening injury (ask Dak Prescott). So Claypool has a long way to go and a lot of bullets to dodge. But all the pieces are in place for him to become the best player this country has ever sent to the NFL.