New NHL jerseys: The good, the bad and the boring

New NHL jerseys: The good, the bad and the boring 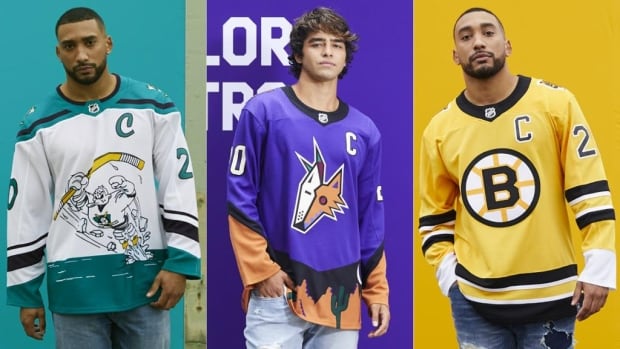 These alternate sweaters are being marketed as a “Reverse Retro” collection that puts “modern twists” on teams’ throwback looks. Most of them are more or less fine. But a few stand out, for better or worse. Here’s a look at all 31 (no, the Seattle Kraken didn’t make one, but the three-year-old Vegas Golden Knights did):

And here are some quick reviews by me, a boringly-dressed white guy in his late 30s who is extremely unqualified to comment on fashion in any way:

Buffalo: No one liked the swords-sans-animal logo when it first came out 20 years ago. Why would they now?

Pittsburgh: Ripping off the Rangers’ diagonal lettering (again) is uninspired, to say the least.

At least they went for it

Anaheim, Arizona: Say what you will about that “Wild Wing” cartoon character busting out of the ice, and that acid-trip coyote face. But, hey, they take us back to a simpler time.

Chicago: Great pains were taken in the promotional materials to either obscure the current logo or not show it at all. Given that Chicago has recently made moves to reduce its use of Indigenous iconography, it’s fair to wonder whether a logo change is in the offing. If so, prepare for the ensuing culture war.

Here’s some of the interesting stuff that happened on another entertaining Sunday:

The Cardinals won on a Hail M̶a̶r̶y Murray. It looked like the surprising Bills would improve to 8-2 when they went up by four on Arizona with only 34 seconds to play. But Cards QB Kyler Murray, who’s becoming a star in his second NFL season, advanced his team downfield for one final heave into the end zone in the dying seconds, and DeAndre Hopkins made the catch of the year to win it:

Nick Chubb cost people a lot of money. With about a minute left and his Cleveland Browns leading Houston 10-7, Chubb broke away for what looked like would be a 61-yard touchdown run. But he unselfishly veered out of bounds at the 2-yard line, allowing Cleveland to kneel out the clock as the Texans had no timeouts left. Chubb’s move ensured victory for his team, but it dealt a bad beat to the many gamblers who had Cleveland at -3.5 or more, which was reportedly one of the heaviest-bet sides of the day.

The Saints may have lost Drew Brees for a while. The all-time-great QB left their win over San Francisco with what was reported today to be five fractured ribs and a collapsed lung. It’s unclear how long the 41-year-old will be out, but in the meantime New Orleans will have to make do with either mistake-prone backup QB Jameis Winston or Swiss Army knife Taysom Hill, or maybe a combination of the two.

Chris Paul got traded in the first big move of the NBA off-season. Shortly after the moratorium on trades was lifted at noon ET, the Phoenix Suns reportedly acquired the Point God from Oklahoma City as part of a deal that sent four players and a first-round pick to the Thunder. The biggest names in the bunch are Kelly Oubre (18.7 points per game last season) and Ricky Rubio (13 points, 8.8 assists). Paul, who’s a future Hall of Famer, is coming off another strong season in which he led the rebuilding Thunder to a surprise playoff berth. But he’s 35 and under contract for a whopping $41 million and $44 million in the next two years. Read more about the trade here.

The CFL plans to release a 2021 schedule soon. That’s what commissioner Randy Ambrosie said today during his annual state-of-the-league address, which he delivered in virtual form. This was supposed to be Grey Cup week until the season was cancelled. Ambrosie said the CFL is planning to play a season next year and hold the Grey Cup in Hamilton as scheduled. But it remains unclear how all that might work or whether fans will be allowed in stadiums.

Dustin Johnson won the Masters with a record score. The 36-year-old American earned his first green jacket (and second major title) by shooting a 20-under-par 268 for his four rounds. That broke by two strokes the record shared by Tiger Woods (from his monumental first Masters victory in 1997) and Jordan Spieth (2015). With the tournament taking place in November instead of its typical April timeslot, Augusta seemed to play a bit softer. But still, Johnson won by an impressive five shots, giving him a share of the sixth-largest margin of victory in Masters history (Woods won by a record 12 in ’97). Speaking of Tiger, the defending champ finished tied for 38th at 1-under after taking a 10 on the par-3 12th on Sunday. Pre-tournament betting favourite Bryson DeChambeau was one shot better and tied for 34th. Corey Connors finished tied for 10th at 9-under after shooting a Canadian-record 65 (7-under) in the second round. Other Canadian results: Nick Taylor tied for 29th, 50-year-old Mike Weir tied for 51st, and Adam Hadwin missed the cut. Read more about Johnson’s win and watch highlights here.

The International Swimming League final is set. It’ll be the Cali Condors, LA Current, Energy Standard and London Roar competing for the title after those four teams made it through the semifinals, which wrapped up today. The expansion Toronto Titans, who are the only Canadian-based team and the squad with by far the most Canadian swimmers on it, did not advance after finishing fourth out of four teams in their semifinal. The two-day final begins Saturday at 8 a.m. ET and will be streamed live on CBCSports.ca.

Ashley Home Store Curling Classic final (3:30-6:30 p.m. ET): Quite a few big names entered the men’s tournament in Penticton, B.C., where Mike McEwen defeated Kevin Koe and Glenn Howard beat Brendan Bottcher in today’s semifinals. That set up the McEwen-Howard final, which was in progress at our publish time. Watch it live here.