NHLers ready for awkward bubble moments: ‘I don’t think it’ll be too friendly’

NHLers ready for awkward bubble moments: ‘I don’t think it’ll be too friendly’ 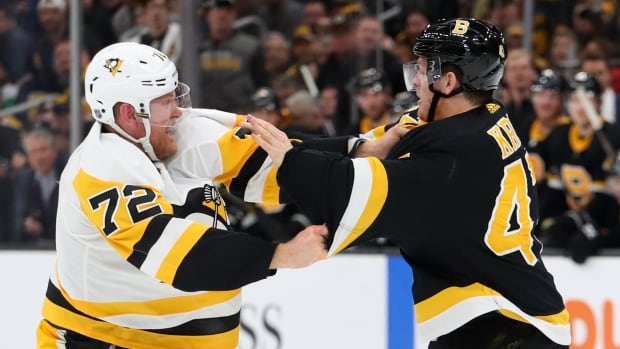 Tuukka Rask doesn’t expect any problems living under the same roof as his rivals.

He’s not so sure about everyone else.

“I don’t have too many enemies in the league because you’re a goalie and you’re just out there on an island,” said the veteran Boston Bruins netminder, who shares a locker room with star winger and noted pest Brad Marchand. “But it might be different for some of my teammates.

“If you play a seven-game playoff series and there’s some heat going on between the teams … probably not playing ping pong together at the hotel.”

The 24 clubs set to battle in the NHL’s restart of its pandemic-hit season that was suspended in mid-March will head to the hub cities of Toronto and Edmonton — where players and coaches will be locked down inside a bubble away from the general public in hopes of keeping COVID-19 at bay — on Sunday.

Two hotels in each market will house the teams, which could lead to some interesting dynamics in the restaurants, lounges and other common areas. There’s a long list of rules related to physical distancing, and each 52-person travelling party will have its own space to both prepare and relax, but there’s a good chance of some awkward moments with hundreds of NHLers trying to grab hold of the Stanley Cup living in close proximity.

In part 9 of 10, Rob Pizzo breaks down whether the underachieving Predators can turn things around in their qualification series.  1:09

The Toronto Maple Leafs and Columbus Blue Jackets, for example, are two of 10 franchises that will be both staying at the same complex and poised to meet in the best-of-five qualifying round for a spot in the usual 16-team playoffs.

“It’ll be something new, that’s for sure,” Leafs defenceman Jake Muzzin said. “I don’t know what it’s going to be like. We’ll find out when we’re there.”

St. Louis Blues centre Ryan O’Reilly, whose team will begin its title defence in the Western Conference’s round-robin tournament to determine the top-four seeds on that side of the bracket in Edmonton, said it will be strange running into someone you butted heads with in a game at the hotel the next morning.

“Once you go on the ice it’s a war,” he said. “I don’t think it’ll be too friendly around the bubble.”

Washington Capitals defenceman John Carlson and his teammates will be housed at the same Toronto hotel as the Pittsburgh Penguins, Philadelphia Flyers, Tampa Bay Lightning and Bruins, but doesn’t envision any real tension.

“Seeing a lot of your playoff opponents wouldn’t necessarily be a normal feeling, but we’re all professionals,” he said. “We’re all grateful just to be able to be in that bubble and to be playing hockey at this time. There’ll be a lot of adjustments across the board, and that certainly is going to be something we haven’t seen before.”

Flames centre Mikael Backlund likened being in the same hotel as Calgary’s qualifying round opponent — the Winnipeg Jets — to his experience at the world championships.

In the final preview of this 10 part series, Rob Pizzo looks at a Panthers team trying to put a tough regular season behind them as they take on the Islanders.  1:10

“It’s going to be even harder now because we’re going to play against one team,” Backlund said. “To see them in the hallway and you had a battle or something, maybe not too happy to see a guy.”

Capitals head coach Todd Reirden said the idea of being anywhere near an opponent off the ice would have been severely frowned upon during his playing days.

“You were always cautious of not being in the same hotel as another team,” he said. “But this is what it takes. We’re just all happy to be able to play hockey during a situation like this and provide entertainment — try to get back to some normalcy in our world.

“There may be some head down, stare downs occasionally with a few of the opposition, but I don’t really expect it too much.”

The fact of the matter is times have changed in hockey. The strong dislike among players of generations past is mostly gone. There’s a lot more socializing away from the rink, both during and after the season.

“If you had laid this (hub) scenario out to me 20 years ago, I would say there’s a better chance of a fist fight in the lobby,” Winnipeg head coach Paul Maurice joked.

Montreal Canadiens counterpart Claude Julien, however, won’t be surprised if something happens at some point during the resumption of play, which gets going in earnest Aug. 1 and could run through the first week of October.

“Back in the day, there was a lot of animosity,” said Julien, who played 12 pro seasons. “You might even see that in these series, as we move forward here, where there’s going to be some animosity. Who knows what’s going to happen in the hotels? That’s something we’re going to experience as we go along. We wouldn’t dare look at the other team. If we did, there was a dirty look.

“Hopefully when it gets to the hotel, we won’t need referees or bodyguards to break up some fights.”

Each bubble gets 14 restaurants

The NHL has unveiled details for hub cities and in-game presentation as it approaches its restart next month in Edmonton and Toronto.

In a video released by the league, the NHL revealed its plan for health and safety, along with information about television broadcasts and player amenities during a period in which no fans will be allowed in the arenas.

NHL personnel in the bubbles are to be separated from the general public during the pandemic under an agreement reached with the federal government.

The NHL says it will use DynaLIFE Medical Labs in Edmonton and LifeLabs in Toronto for daily COVID-19 testing.

Each bubble has 14 restaurants for players and staff and there is a concierge service for players to get delivery.

BMO Field in Toronto — normally the home of Toronto FC of the MLS and the CFL’s Argonauts — is part of the bubble, serving as an outdoor recreation facility.

Video game company EA Sports will provide crowd noise and the NHL plans to use individual teams’ goal horns and chants to add to the atmosphere.