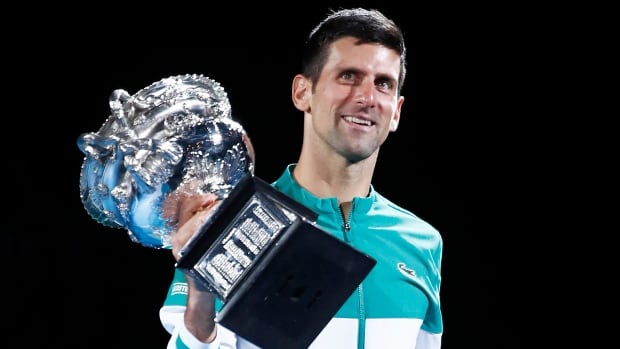 Novak Djokovic thanked the blue court at the Rod Laver Arena after picking up a record-extending ninth Australian Open title on Sunday with a 7-5 6-2 6-2 win over Russian Daniil Medvedev.

With Sunday’s win, the world number one took his Grand Slam tally to 18, just two shy of Roger Federer and Rafa Nadal’s men’s record of 20.

“Last but not least I would like to thank this court,” the Serbian said during the trophy presentation.

“I would like to thank Rod Laver Arena. I love you each year more and more. It’s been a love affair that keeps growing. Thank you so much.”

Djokovic faced a lot of flak in the lead-up to the year’s Grand Slam for requesting that organizers ease strict quarantine protocols for players in Australia.

He thanked the organizers for a “great effort” to host the Grand Slam amid the COVID-19 pandemic.

“Look, there are a lot of mixed feelings about what has happened in the last month or so with tennis players coming to Australia,” the 33-year-old said.

“But I think when we draw a line in the end it was a successful tournament for organizers.”

He also appreciated the efforts of his team and made a special mention of his physiotherapist Ulises Badio for helping him recover from an abdominal strain he sustained during his third round match.

Djokovic also had words of encouragement for Medvedev, whose 20-match winning streak ended with Sunday’s defeat at the floodlit showcourt.

“I really like Daniil as a person, off the court he’s great,” Djokovic said. “Always very friendly … On the court, he’s definitely one of the toughest players that I ever faced in my life.

“It’s a matter of time when you hold a Grand Slam that’s for sure. If you don’t mind waiting a few more years.

“I would like everyone … to appreciate what he has done, 20-match winning streak in the last couple of months. Amazing.”

ATP Finals winner Medvedev acknowledged it was not his best day and hoped he will soon be holding a Grand Slam trophy after losing his second major final after defeat to Rafa Nadal at the 2019 U.S. Open.

“Never easy to speak when you just lost a final of a Grand Slam,” Medvedev said. “But I’ll try to do my best, better than on court I hope.

“Just to tell you a small story, guys. I first practiced with Novak when I was like 500-600 in the world in Monaco. He was already number one. Just won Wimbledon.

“I thought okay he’s not going to speak to me or something, because the guy was a God for me. Because I was shy so I didn’t speak. He was asking the questions, talking to me like a friend. I was really surprised.

“It never changed since I was 600 in the world or four in the world, you’re a great sport, great person. So congratulations.”