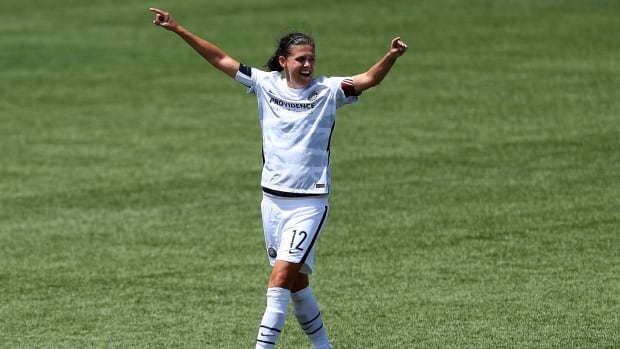 A spot in the championship is on the line when the NWSL Challenge Cup semifinals get underway Wednesday in Utah — and if the matches are anything like the quarters, soccer fans will be entertained.

Whether it’s seeing the top three seeds ousted from the tournament, including the two-time defending champion North Carolina Courage, or three games decided by penalty kicks, anything can happen in a knockout format.

There’s bound to be more surprises before Sunday’s final at Rio Tinto Stadium.

Here’s what you should know about the upcoming semifinals:

The Thorns were the only winless team in the preliminary round, but all it took was a Morgan Weaver goal in the 68th minute to stun the previously unbeaten North Carolina Courage. Britt Eckerstrom, the team’s third-string goalkeeper, started her first game of the tournament in place of injured Bella Bixby and enjoyed an outstanding outing.

International soccer’s all-time leading scorer Sinclair (186 goals in 296 matches for Canada) hasn’t shown her usual penchant around goal as of yet, but as captain she played an important role mentoring Weaver and fellow rookie Sophia Smith, who’s currently injured. Midfielders Rocky Rodriguez (Costa Rica) and Lindsay Horan (U.S.) have been standouts. Horan, who scored this remarkable goal in the preliminary round, is nursing a hip injury. Veteran defender Meghan Klingenberg has been key on set pieces.

Outside of a rough outing against Sky Blue (2-0 loss), Houston has been one of the surprises of the tournament. After finishing seventh in the 2019 season, the team retooled its lineup and gelled quickly in the Challenge Cup.

Morgan Weaver scored in the 68th minute to send the Portland Thorns into the semifinals of the NWSL’s Challenge Cup with a surprising 1-0 upset over the two-time defending league champion North Carolina Courage. 1:10

Rachel Daly (three goals) and Shea Groom (two goals) have given the Dash an 1-2 offensive punch, while the centreback combo of Katie Naughton and Megan Oyster are about as tight as they come, though Oyster’s status is questionable after suffering a fractured rib last game. Keeper Jane Campbell had a rocky game against Sky Blue, but showed why she’s one of the premier shot stoppers in the NWSL in denying two Utah penalties in the quarters.

As for the Canadians on the Dash, left back Chapman has played 90 minutes in four out of five games, Sophie Schmidt is soaking up significant minutes in midfield and Nichelle Prince earned her first start up front in the quarter-finals after being used mostly as a substitute.

This is a battle between teams with arguably the best two top goalkeepers in the league.

There were more than a few question marks about Sky Blue FC heading into the Challenge Cup, especially given that three key players were unavailable due to injury (Carli Lloyd, Mallory Pugh, Caprice Dydasco), but they seem to have found their groove as the tournament has moved along.

McCall Zerboni’s leadership in the midfield can’t be overstated. Traded from the Courage in the off-season, the 34-year-old has been a workhorse and it’s rubbed off on everyone around her. If you’ve watched any of their games, Jennifer Cudjoe has probably caught your eye. The midfielder made the team through an open tryout — a rarity — and will likely earn more than just her current short-term contract after the Challenge Cup is over.

Much of the team’s success has come via sure-handed Canadian goalkeeper Sheridan. She’s allowed just three goals in five games, posted three clean sheets and stopped a key penalty in Sky Blue’s quarter-final upset over Washington. She’s been one of the team’s leaders, helping to organize the backs as well as making those key saves.

Kailen Sheridan of Whitby, Ont., made the game-ending save as her Sky Blue FC advanced to the NWSL Challenge Cup semis with a 4-3 win on penalties over the Washington Spirit. 7:05

Chicago — a finalist last season — scored just two goals in the preliminary round, but thanks to workhorse fullbacks Julie Ertz (a tournament MVP candidate) and Casey Short, as well as U.S. national team goalkeeper Alyssa Naeher, opposing teams have their work cut out for them.

However, if they want to get back to the championship game, scoring during the run of play and not relying on a stalwart defensive line would help. Through five games, the Red Stars recorded just 30 shots (third fewest in the league) with only 10 on goal (last).

In her first NWSL season, St. Georges hasn’t looked out of place, starting in three games including the quarter-final. She was drafted 20th overall by Chicago in 2019, but missed all of last season after knee surgery.

Though she’s yet to cap for the Canadian senior national team, expect her to get a good look ahead of the Tokyo Olympics next summer.