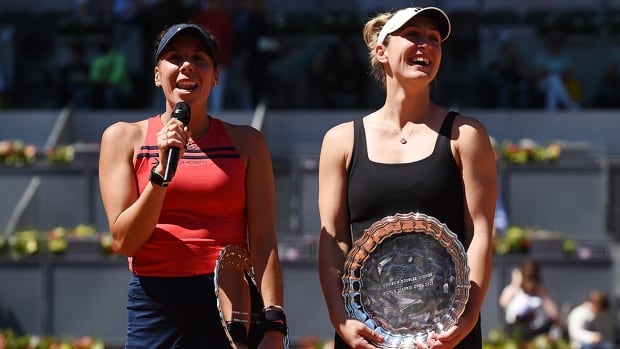 The win was Dabrowski’s first in three appearances in the Madrid final after the Ottawa native reached the championship match in 2021 (with Schuurs) and in 2019 (with Yifan Xu).

“It’s been amazing to be back and enjoy Madrid,” Dabrowski said. “I love this city a lot and this is actually my third final in a row here, so I guess third time is the charm. We had a bit of a slow start this season, but we stuck it out, we worked together and we played a great tournament.”

Dabrowski and Olmos reached their first final Saturday in nine tournaments playing together. Their previous best was in 2021 in Miami where they lost in the semifinals.

They had a tough time in Madrid, overcoming a one-set deficit in two of their three matches this week.

They reversed that trend in Saturday’s final with a stunning first set win in which six breaks — three on each side – were recorded. Energized by having the lead, Dabrowski and Olmos picked up the pace, winning back-to-back games for the first time in the match to take control of the second set at 2-0.

Schuurs and Krawcyk mounted a comeback, breaking Dabrowski and Olmos in the eighth game to level the match at 4-4. They closed the set at 7-5 to extend the match.

A resilient Dabrowski and Olmos won their third straight super tiebreak for the victory.