Protesters gathered in Myanmar’s biggest city Monday despite the ruling junta’s thinly veiled threat to use lethal force if people answered a call for a general strike opposing the military takeover three weeks ago.

Despite roadblocks around the U.S. Embassy in Yangon, more than a thousand protesters gathered there, while 20 military trucks with riot police had arrived nearby.

The crowds were gathering after supporters of the Civil Disobedience Movement, a loosely organized group leading the resistance, called for people to unite on Monday’s date for a “Spring Revolution.”

The junta warned against the general strike in a public announcement carried last Sunday on state television broadcaster MRTV.

“It is found that the protesters have raised their incitement towards riot and anarchy mob on the day of 22 February. Protesters are now inciting the people, especially emotional teenagers and youths, to a confrontation path where they will suffer the loss of life,” the onscreen text said in English, replicating the spoken announcement in Burmese.

The junta’s statement also blamed criminals for past protest violence, with the result that “the security force members had to fire back.” Three protesters have been shot dead so far.

The protest movement has embraced nonviolence and only occasionally gotten into shoving matches with police and thrown bottles at them when provoked.

In Yangon, trucks cruised the streets Sunday night blaring warnings against attending gatherings of five or more people. A ban on such gatherings was issued shortly after the coup but not widely enforced as cities saw large daily demonstrations.

The authorities overnight also tried to block off key streets with barriers including tractor-trailers with flattened tires, but they were swept aside by protesters.

The ominous signs of potential conflict drew attention outside Myanmar, with the U.S. reiterating that it stood with the people of Myanmar.

Secretary of State Antony Blinken said on Twitter the U.S. would take firm action “against those who perpetrate violence against the people of Burma as they demand the restoration of their democratically elected government.”

“We call on the military to stop violence, release all those unjustly detained, cease attacks on journalists and activists, and respect the will of the people,” spokesman Ned Price said on Twitter. 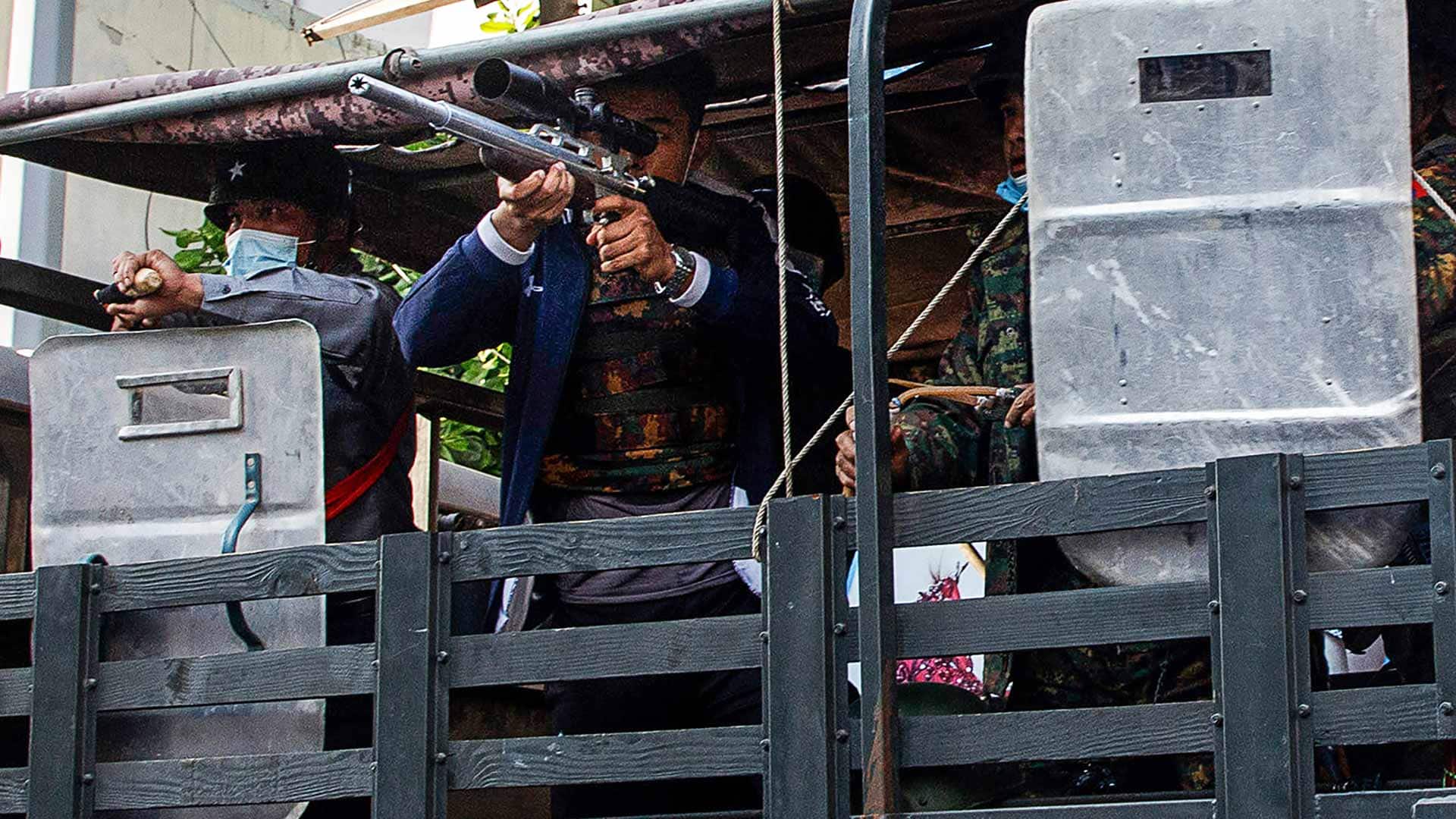 Night has become a time of fear in Myanmar with the ruling military cracking down on protesters and shutting off the internet to cover up arrests and violence. 2:11

Earlier Sunday, crowds in Myanmar’s capital attended a funeral for the young woman who was the first person confirmed to have been killed in the protests, while demonstrators also mourned two other protesters who were shot dead on Saturday.

Demonstrators turned out in force in Mandalay, the country’s second-biggest city, where security forces shot dead two people on Saturday near a dockyard where the authorities had been trying to force workers to load a boat. The workers, like railway workers and truckers and many civil servants, have joined the civil disobedience campaign.

The junta prevented Parliament from convening Feb. 1, claiming the elections last November, won by Aung San Suu Kyi’s party in a landslide, were tainted by fraud. The election commission that affirmed the victory has since been replaced by the junta, which says a new election will be held in a year’s time.

The coup was a major setback to Myanmar’s transition to democracy after 50 years of army rule that began with a 1962 coup. Suu Kyi came to power after her party won a 2015 election, but the generals retained substantial power under a military-drafted constitution.

Under the junta, 640 people have been arrested, charged or sentenced, with 593, including Suu Kyi and President Win Myint, still in detention, according to the independent Assistance Association for Political Prisoners.