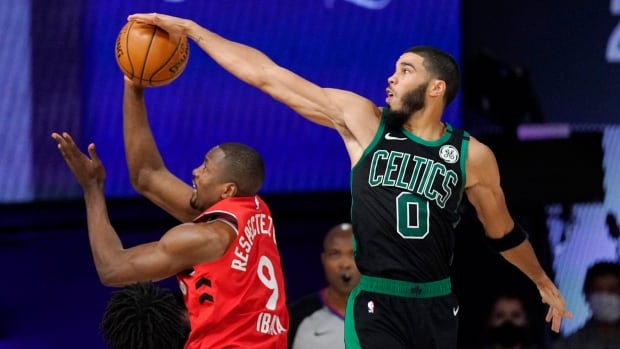 Kyle Lowry had all but pushed the Toronto Raptors to a pair of victories with two excellent performances.

But the six-time all-star guard had an off night on Monday. And so did the rest of the Raptors — and now the defending NBA champions are one loss away from elimination.

“We just didn’t play crisp enough,” Lowry said. “We didn’t look at the rim early enough in the shot clock to attack. But it happens. Now we got to watch the film and make adjustments and play for our lives.”

Jaylen Brown scored 27 points while Kemba Walker had 21 and the Boston Celtics pummelled the Raptors 111-89, taking a 3-2 lead in their best-of-seven Eastern Conference semifinals.

The Raptors’ season will end with a loss on Wednesday. Game 7, if needed, would be Friday.

“The energy level of our guys, we kinda just weren’t with it tonight, which is disappointing,” said Raptors coach Nick Nurse. “[The Celtics] looked faster, stronger and hungrier than we did. Man, I thought we had great shots in the first quarter and we get 11 points and somehow that really disheartens us against (Boston). I think it was a lack of energy for the most part.”

The Raptors looked out of sync all night in the blowout loss. Jaylen Brown led the way with a game-high 27 including a poster dunk over OG Anunoby. 1:00

Fred VanVleet topped Toronto with 18 points, while Norman Powell had 16.

Pascal Siakam, who led Toronto in scoring before the four-month COVID-19 hiatus, had another rough night with 10 points. He took just three shots in the first half.

“I just felt like we didn’t really catch a rhythm throughout the whole first half and they had a lot of easy stuff and, on the other end, we didn’t really execute as well — but, yeah, we can’t have halves like that,” Siakam said.

Serge Ibaka looked to tweak something in the 4th and limped to the locker room. He did not return to the game. 1:27

Lowry, who Boston coach Brad Stevens had said “might be the most underrated player in the league,” had played about 90 minutes over the two previous games combined. He refused to blame the loss on fatigue.

Still, the Raptors looked gassed, like they were running in sludge. They scored just 11 points in the first quarter on a horrendous 20 per cent shooting, clanging three-pointers off the rim, airballing forced jump shots, and missing on seemingly easy lay-ins.

Boston’s gameplan was to set the tone early. And while the Raptors defence kept Boston honest in the beginning, that soon evaporated too. And by the time Brown scored on a pullup jumper late in the second quarter the Celtics were up by 28 points. It felt more like 58.

“We were playing with great purpose,” Stevens said. “You could feel that from the get-go.”

A Brown stepback jumper stretched Boston’s gaping lead to 30 points late in the third, and Boston led 87-63 with one quarter left to play.

“Probably worst place to be, not making shots and not getting stops, that’s a recipe to get you down 30,” VanVleet said.

A Powell three-pointer pulled Toronto to within 18 points early in the fourth, but Nurse, looking ahead to Game 6, went deep into his bench soon after.

The Raptors were beaten virtually across the board, but one telling stat, particularly in Siakam’s case, was the fact they were beaten — and beaten up — by Boston in the paint, outscored 48-32.

“The job’s not finished yet,” Brown said. “We’ve still got a lot of work that needs to be done.”

Lowry said rather than quickly flushing this loss, his team must learn from it. He’s still confident his team can take this series.

“We’ve just gotta worry about one, I’m confident in our group,” he said. “Our group is very tough-minded, tough-spirited, we’re a good team. We know we gotta take one game at a time, one possession, one minute, one second at a time and just go out there and play.”

The Raptors had been riding the momentum of a thrilling Game 3 victory that saw OG Anunoby connect on a buzzer-beater off a jaw-dropping pass from Lowry with 0.5 seconds to play.

Toronto was the dominant team in Game 4, but looked nothing like that team on Monday.

Anunoby’s seven points were a team-high in the first quarter. Lowry and Ibaka, with two points apiece, were the only other Raptors who scored in an ugly period that was almost the worst in Raptors playoff history. They scored just nine points in a quarter versus Detroit in the 2002 post-season. Toronto trailed 25-11 to start the second.

The second quarter was no better. Boston pulled away with a 23-7 run. Lowry and Ibaka led the way with just five points each and the Raptors trailed 62-35 heading into the halftime break.

The Raptors had been 7-2 all-time in Game 5s before Monday, and had won Game 5s the previous four times they’d been tied 2-2 in series.

The Raptors had the biggest comeback in franchise history and the NBA’s largest in a decade earlier this season when they clawed back from a 30-point deficit to beat Dallas on Dec. 22.

There were no late-game heroics on Monday. The Celtics are now 5-2 against Toronto since the restart, and the Raptors have only lost seven games this season by 15 or more points — four of those seven coming against Boston.

This series shows how there is no such thing as a home game in the NBA bubble in Walt Disney World. The designated “away” team has won each game in the series. Toronto is the “away” team on Wednesday.

“You can’t make excuses about having fans or not,” Lowry said. “We wish we had our fans, we wish we were at home and in front of our fans but this is the situation, there’s no . . . it doesn’t really matter.”