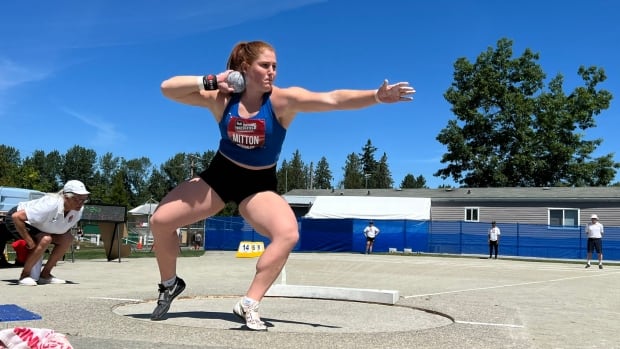 With a scorching sun beating down on the shot put circle and a healthy group of fans cheering and yelling in support, Sarah Mitton stepped up for her final throw at the national championships on Saturday afternoon in the Township of Langley, B.C.

Mitton spun powerfully, letting out a scream as she fired her last throw.

When it finally came thudding to the ground, Mitton knew she had done something special. The crowd did too as they cheered wildly.

After a length measurement, Mitton set a national record with a throw of 20.33 metres. It’s the farthest throw in the world this season.

“Over the moon. It came out of my hand and I knew the second it left it was a big one. It feels so good. I was super excited. And then I saw it was well over 20 and I lost my mind,” Mitton said.

Earlier this week ahead of the competition, Mitton told CBC Sports she sensed a 20-metre throw was something she was capable of doing.

Whether or not that would come to fruition at nationals was a question mark, according to her coach.

“Quite frankly I didn’t expect this here because she’s been squatting. She’s lifting really heavy. The other day she was complaining about her legs being sore,” Richard Parkinson said.

A day earlier during training, Mitton says she asked her coach to take a photo near the shot put circle.

“Yesterday my coach and I took a photo in front of the shot put sign. I got him to put up the two and I put up the zero,” she said.

“And he said, “don’t you think you’re getting ahead of yourself? I was like no, “I’m manifesting it.”

The 25-year-old from Brooklyn, N.S., has been on a remarkable trajectory over the last number of months.

In February, she broke the Canadian indoor record at an event in New York with a throw of 19.16 metres. That broke the previous mark of 18.81 set by Mitton’s training partner Brittany Crew in 2020.

Mitton followed that up by shattering the outdoor Canadian record in May, also held by Crew, at the Golden Horseshoe Prep Meet in Hamilton. In her final throw of the event, Mitton threw 19.58 metres — Crew’s previous record was 19.28.

And now she’s crushed her own national record, just a month away from the world championships in Eugene, Ore.

“I’ve been chasing 20 for a while ever since I hit 19. Pretty excited it finally happened,” Mitton said.

“I really feel like I’m coming into my own. It’s been really crazy to see how far I’ve come. Four years ago I was debating whether I would do this full time or not. It’s pretty crazy to be world number-one right now.”

With more than 20 family members and friends gathered around the hammer throw venue, Camryn Rogers captured the national women’s title on Saturday night.

Her fourth throw of 75.33 metres was good enough to beat second-place finisher Jillian Weir’s throw of 73.12.

“The goal is always to be consistent and hit it when it counts and today showed we’re continuing to build. Solid competition right before worlds,” Rogers said after the event.

It was somewhat of a homecoming for Rogers, who competed in a high school provincial championship at the same venue five years earlier.

“It’s kind of crazy. This is the closest I’ve competed to home in five years, since going into college. To have it be here, at nationals when it counts. It’s cool to see how far I’ve come and how far my competitors have come as well,” she said.

And just a couple of weeks ago the 23-year-old from Richmond, B.C., shattered her own Canadian as well as the U.S. collegiate records with a toss of 77.67 metres — the ninth all-time best women’s throw in the world.

It was enough to win her third NCAA women’s hammer throw title. She’ll compete for Canada the world championships in Eugene next month.

In the final race on Saturday night there was a sprint showdown between Aaron Brown and Jerome Blake.

Earlier in the day Blake set the pace, posting a time of 10.00 to enter the final as the fastest qualifier. But with a huge crowd watching and the pressure on in the final, Brown delivered another championship-winning performance.

“It feels good to get another win. Anytime I come to the championships it’s about coming out healthy, getting the wheels turning and getting ready for the world championships. And that’s exactly what I did. The win is the bonus,” Brown said after the race.

The air was still and the temperature hovered around 24 degrees as the sprinters took to the track. There was a false start to begin. The racers reset and got off the blocks clean on the second sound of the gun.

“Obviously the final I wish was faster but I feel the conditions were better earlier in the day. We had more of a tailwind. There was a false start, and there was a bit of a delay ahead of the final. But these things happen and you have to be professional about it and go about your business,” Brown said.

In the women’s 100m final, Khamica Bingham was able to stride to victory in a time of 11.36. It’s her second national title.

She finished second at the national championships last year in Montreal. In her second Olympic appearance last summer in Tokyo, Bingham made it to the semifinals in the 100m.

With the sun setting on the McLeod Athletic Park Stadium track, the men’s 800m event took centre stage at the national championships on Saturday evening.

Despite not posting the fastest time in the semifinals a day earlier, Marco Arop was favoured to win the race. The six-foot-three middle-distance star from Edmonton has had success on the international stage, most recently winning a Diamond League event in Birmingham.

Longtime friend and teammate Brandon McBride was leading for the first part of the race, but it wasn’t long before Arop charged to the front and never looked back.

“It was a good race. I thought I ran it strategically. Both of us got in under the world standard. I’m so glad he made it,” Arop said after the race.

“I had a good feeling that as long as I go out too fast I’ll have something left in the finish. In this race it was just a matter of when. At 300 I made that move and didn’t look back.”

Both Arop and McBride will compete at the world championships next month.

Arop says he’s ready for that challenge and he’s using every race to build toward worlds.

“It’s always a learning experience. It’s nice to be able to try certain things, especially in a quality race like this,” he said.