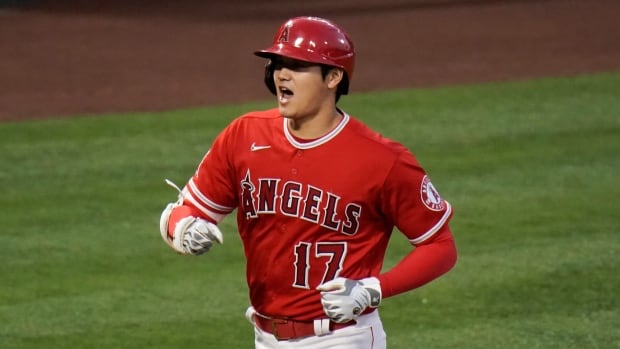 Shohei Ohtani is having a Ruthian MLB season

The NHL playoffs are underway, the NBA play-in tournament has begun and the WNBA is enjoying an electrifying start to its season, but Shohei Ohtani leaves us with no choice but to talk baseball here in May.

Ohtani entered the league in 2018 with Babe Ruth-level hype. Now, he’s putting up the numbers to match.

The Los Angeles Angels’ two-way star crushed his league-leading 14th home run of the season last night, which would be notable in itself. But Ohtani also regularly hits 100 MPH as a pitcher, and he carries the same earned-runs average (2.10) as three-time Cy Young winner Max Scherzer into his start tonight against Cleveland.

Imagine Patrick Mahomes doubling as cornerback and leading the league in interceptions, or Auston Matthews moonlighting as a goalie. That’s Ohtani.

For the third time this season, Ohtani will start a game on the mound while leading MLB in dingers. That feat had not been accomplished since Babe Ruth did it exactly one century ago (and Ruth made just one start that year with his pitching career winding down). You have to go back two years further to find the last season Ruth pitched regularly, meaning it’s been over 100 years since we’ve seen a player like Ohtani.

For his career, Ohtani is already one of just five players to hit 60 home runs and strike out 100 batters, a list that also includes The Bambino. If he continues at his current pace, Ohtani will be the first player ever with 100 strikeouts as a pitcher and 100 runs batted in during the same season.

The 26-year-old was highly sought after when he became available in the 2017 off-season, due to his combination of age (rarely do Japanese stars come to MLB so young) and talent. He immediately won rookie of the year despite managing only 10 starts as he battled injuries. After the season, Ohtani underwent Tommy John surgery, which effectively eliminated his next two seasons of pitching. In 2020, his batting average was a lowly .190, and in two starts he lasted less than two innings combined while allowing seven total runs.

And so Ohtani came into this season fully healthy, but relatively under the radar. Now, he’s basically breaking the radar. Batter Ohtani leads MLB in barrels per plate appearance. Per Statcast, barrels are a “batted ball with the perfect combination of exit velocity and launch angle.” Only Giancarlo Stanton has hit a ball harder than Ohtani this season. Over the weekend, Ohtani, a lefty in the box, lifted a shin-high pitch over the Green Monster. Two nights ago, he clobbered a pitch about shoulder-high over the fence. When he saw a meatball last night, he sent it 440 feet to dead centre.

Tonight, Pitcher Ohtani takes the hill as the least hittable hurler in baseball, with a league-low .126 opponent batting average. The right-hander on the mound has allowed just two extra-base hits, fewer than anyone else with at least 25 innings under their belt. He leads the majors in extra-base hits himself, with 26. He’s struck out 40 batters, and added six steals as a baserunner for good measure.

Considering Ohtani plays with perennial MVP candidate Mike Trout, he may not even be the best player on his team. And yet the Angels are 18-23, fourth in the AL West. To make matters worse, the team announced yesterday that Trout could miss up to two months with a calf injury. It’s now up to Ohtani to drag his team into the playoff race. If he does, an MVP award of his own would have to be in order.

That one MVP season would match Babe Ruth’s career mark (but mostly due to a rule limiting each player to just one between 1922-1929).

the pitch location on two of Shohei Ohtani’s most recent homers lmao <a href=”https://t.co/PWoCmpE3yv”>pic.twitter.com/PWoCmpE3yv</a>

It’s finally time to drop the puck on the North Division playoffs. The Jets and Oilers begin their first-round series tonight in Edmonton at 9 p.m. ET. You can watch that game live for free here. Many are counting the Jets out against Connor McDavid and Leon Draisaitl — especially after the Oilers dominated the teams’ regular-season matchup, going 7-2 and winning the last six. Vegas agrees, as the Oilers’ implied odds of winning the series on betting sites is 65 per cent. But these are the NHL playoffs, where sometimes all you need is a hot goalie, and in reigning Vezina winner Connor Hellebuyck the Jets could have just that.

The Leafs and Canadiens still have another night to go before their series begins. Should it reach Game 6, Quebec announced on Tuesday it would allow 2,500 fans into the arena as COVID-19 restrictions start to lift in the province. But Toronto mayor John Tory ruled out fans for the first round, while Alberta and Manitoba said there were no such plans in place either. For a first-person take on this unique tournament, read Peter Mansbridge’s story on what the “Canada Cup” means to him.

But the American playoffs may have hit a snag. Here’s what we know so far: St. Louis announced there were “discrepancies in COVID test results relating to multiple players.” Multiple reports suggest there is a second affected team. As of our publish time, all games were still set to be played as scheduled. Catch up on the latest here.

Sabrina Ionescu is already a superstar. The WNBA’s top pick in 2020 played just three games before an injury abruptly ended her rookie season. In 2021, the New York Liberty guard is back with a vengeance. The 23-year-old had already nailed a game-winning buzzer-beater in the season opener before recording the 10th triple-double in league history last night — in her sixth career game. With Ionescu back on board, the Liberty are unbeaten through three games, already exceeding their win total of two from last season. Read more about Ionescu’s latest accomplishment here. And if you’re wondering when the WNBA may expand to Canada, CBC Sports’ Bring It In panellists shared their thoughts here.

The CEBL is bringing back the Elam Ending. The target-score finish was first introduced to the Canadian league for its Summer Series last year, and has also been used for the past two NBA all-star games. In the CEBL, the clock will stop with four minutes remaining in the fourth quarter, when nine points are added to the leading team’s total. The first team to hit that mark wins the game. The CEBL remains the only pro league in the world to use the scoring system. Watch this video for a full explainer of the Elam Ending.

Sprinters Andre De Grasse and Aaron Brown returned to the track. However, neither was in top form. De Grasse was third in the 100, with his slowest time of three races this season at 10.17. American Fred Kerley won as the lone runner to break 10 seconds, with Olympic contender Justin Gatlin second. Brown, meanwhile, posted a time of 20.4 seconds in the 200, but that’s still nearly half a second off his personal record. Both De Grasse and Brown are scheduled to race the 200 when the Diamond League season kicks off in England on Sunday. Read more about today’s results here.

The NBA play-in tournament began with a whimper. On paper, the East matchups didn’t look particularly interesting. They lived up to that billing on Tuesday, as the Pacers rolled over the Hornets with Canada’s Oshae Brissett notching 23 points and the Celtics topped the Wizards behind Jayson Tatum’s 50-burger. The Pacers and Wizards will play an elimination game Thursday, with the winner earning the No. 8 seed. Read more about those games here. Tonight’s West matchups were always more intriguing, as the Ja Morant-led Grizzlies take on DeMar DeRozan’s Spurs before the main event features LeBron James and the Lakers versus Steph Curry and the Warriors. Here’s a refresher on how the tournament works.

Canada lost a curling match to… Australia? The previously unbeaten Canadian duo of Kerri Einarson and Brad Gushue fell to the previously winless Australian pair of Tahli Gill and Dean Hewitt at the mixed doubles worlds this morning. But Canada later rebounded with an 8-3 win over Korea to improve to 4-1. Meanwhile, Canadian skip Chelsea Carey is officially back in the mix, revealing to CBC Sports’ Devin Heroux today that she’s put together a rink to represent Saskatchewan. Read more about Carey’s return here.