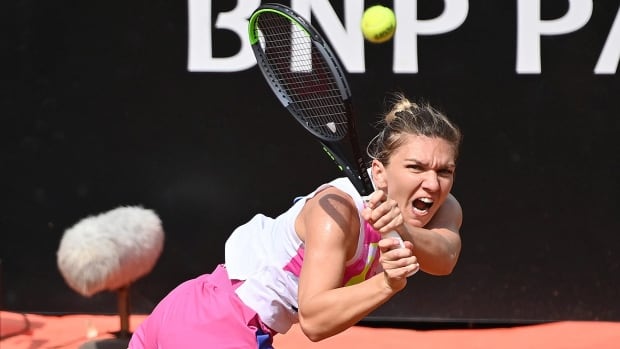 Muguruza struggled with her serve and double faulted on the final two points of the two-hour 16-minute match.

Halep, who lost to Elina Svitolina in the 2017 and 2018 finals, will face either Karolina Plísková or Marketa Vondrousová in Monday’s championship match.

The second-ranked Halep is 13-0 overall stretching back to February, when she won a title in Dubai. After the tour’s five-month break due to the coronavirus pandemic, the Romanian returned by raising another trophy in Prague last month. She then skipped the U.S. Open due to travel and health concerns.

World No. 2 Simona Halep moves on to the Italian Open semifinals when Yulia Putintseva retires midway through their match due to a lower back injury. 1:05

After fans had not been allowed in at the Foro Italico all week, 1,000 spectators were being admitted in for the semifinals and finals.