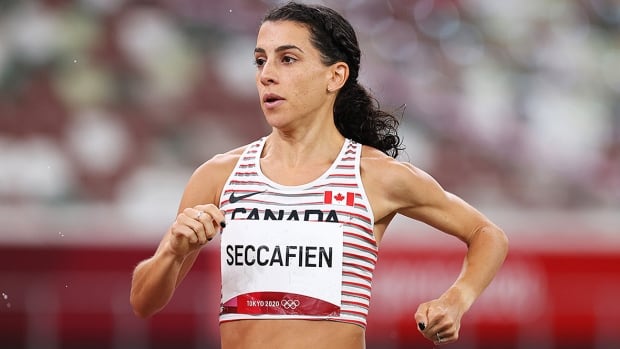 Andrea Seccafien misses the simple pleasures of home — having her own space, changing her wardrobe, using her own kitchen and spending time with her fiancé. But it could be Christmas Day before her and Jamie Whitfield are reunited in their Melbourne apartment.

The Canadian distance runner is among more than 45,000 Australian citizens stranded across the world and registered with the government as wanting to return home.

The Australian border has been closed since March 2020 to all non-permanent residents in a bid to contain coronavirus and Melbourne is currently in its sixth lockdown after struggling to curb an outbreak of the highly contagious Delta variant.

Seccafien, who lives in the city on a temporary visa, had to apply for a travel exemption to leave for North America on April 11 to try to qualify for Tokyo 2020, her second Olympics.

To return, she also had to seek a border permit that has been “under consideration” for nearly a month. After ending her season Aug. 31 in Italy, the Guelph, Ont., native travelled to Berlin, Germany, where she is cat sitting at her brother’s house while he and his partner are in Canada.

“I don’t want people to feel bad for me because I knew this was the situation,” Seccafien told CBC Sports this week. “I chose to leave, and I chose to go to the [Tokyo] Olympics. I left because I had to. I’m [an Athletics Canada]-funded athlete and would lose my funding if I didn’t do this.

“There are people who have been stranded a lot longer than I have. People separated from their children, people who have missed saying goodbye to their [dying] parents. A lot of terrible, heart-wrenching situations.”

Athletics Canada, which is aware of Australia’s policy, told CBC Sports it has written a generic letter in support of Seccafien and will assist the runner through her performance adviser, Molly Killingbeck.

Looking back, Seccafien said she would have applied for a border permit to return to Australia a month earlier in early August. She thought one could only apply up to a month before wanting to travel home. The Canadian women’s half-marathon record holder also believed her running season would extend into the fall with road races.

“It’s hard to know when your body’s going to give up,” said Seccafien, who competed twice after running the women’s Olympic 5,000- and 10,000-metre events in the first week of August, despite experiencing general body soreness and her pelvis “feeling out of line.”

With vaccination rates rising, Australia is potentially only months away from relaxing COVID-19 restrictions. Prime Minister Scott Morrison has said when 80 per cent of the adult population has received both shots — forecasted for late November — they will be allowed to travel overseas. Only nine per cent of Australian adults were fully vaccinated in mid-July, CNN reported.

“Only now are they vaccinating people at any [decent] rate eight months later,” a frustrated Seccafien said. “I was vaccinated the first day I was in Flagstaff [Ariz.] for altitude training in April when no one had been vaccinated in Australia.”

Throughout the pandemic, Australia has kept its virus numbers relatively low with a little over 84,000 total infections and 1,150 deaths, according to Johns Hopkins University in Baltimore, Md.

Seccafien has wondered if her best option is waiting for the Australian border to open to vaccinated people. She has also considered returning to North America and Athletics Canada’s West Hub in Victoria, where proper physio and massage treatment the 31-year-old hasn’t received since the Olympics would be available, along with gym facilities and training partners.

You basically have to buy a business class flight which is like $10,000. Even economy [flights] are $5,000.— Canadian runner Andrea Seccafien on the struggles of citizens attempting to return to locked-down Australia

“I’m going to need to start training at some point,” said Seccafien. “I don’t know if I will ever be approved, but I don’t want to go somewhere and find out I’ve been approved because I will have wasted money on a flight.”

Even if Seccafien’s application for a border permit is approved, she noted, there are limited flights to Australia after national cabinet reduced the weekly quarantine intake to 3,035 from 6,070 in July — lower than when the initial cap of 4,000 was implemented in July 2020.

On Monday, British newspaper The Guardian reported the current international passenger intake was 2,285. As a result, prices for the few available seats into Australia have skyrocketed, with international airlines selling business and first-class tickets at a premium to break even.

“A lot of people don’t have the financial means to go home,” Seccafien said. “You basically have to buy a business class flight which is like $10,000. Even economy [flights] are $5,000.”

Melbourne residents have had to adhere to strict stay-at-home measures for months, including a 9 p.m. to 5 a.m. curfew, and not being able to stay outside more than four hours or travel beyond 10 kilometres from home.

Whitfield, a postdoc doing exercise physiology research at the Melbourne campus of the Australian Catholic University, has been in lockdown for almost a year.

“It’s not a way to live. It’s difficult because he has to go in a lab and hasn’t been able to do that,” said Seccafien, who moved to Melbourne late in 2017. “I think this week he’ll be able to return because he got an exemption.”

Seccafien’s mental health suffered greatly through much of 2020 after enduring two lockdowns. She took a break from training before the second lockdown of 111 days and didn’t compete for a seven-month stretch.

“In this situation, you just have to be tougher every day,” said an emotional Seccafien, her voice cracking. “I try to [tell myself] I can enjoy my life in Berlin. It’s an awesome city and I’m trying to live in the moment and not think I’m not probably going to go home for three months. You have to try to appreciate not being in lockdown.

“Yes, I really wish I was with Jamie, but is this that much worse? It’s not, because the alternative is a crazy lockdown.”