President Donald Trump’s Supreme Court nominee Amy Coney Barrett said on Tuesday at her U.S. Senate confirmation hearing that she is not hostile to the Obamacare law, as Democrats have suggested, and declined to specify whether she believes landmark rulings legalizing abortion and gay marriage were properly decided.

Barrett opted not to say whether she would take part in a major Obamacare case to be argued on Nov. 10 or in any disputes arising from the Nov. 3 election — as Democrats have requested — as she answered questions for the first time on day two of her Senate Judiciary Committee confirmation hearing.

Trump put forth Barrett’s name as a nominee after the death of liberal Justice Ruth Bader Ginsburg. He has asked the Senate to confirm Barrett before the Nov. 3 election in which he is seeking a second term in office.

The Republican president has said he expects the Supreme Court to decide the election’s outcome as he faces Democratic challenger Joe Biden. Barrett said no one at the White House sought a commitment from her on how she would rule on that or any issue.

“It would be a gross violation of judicial independence for me to make any such commitment or for me to be asked about that case,” Barrett told the committee of possible election cases.

WATCH | Barrett on if she would consider recusing herself from election-related cases: 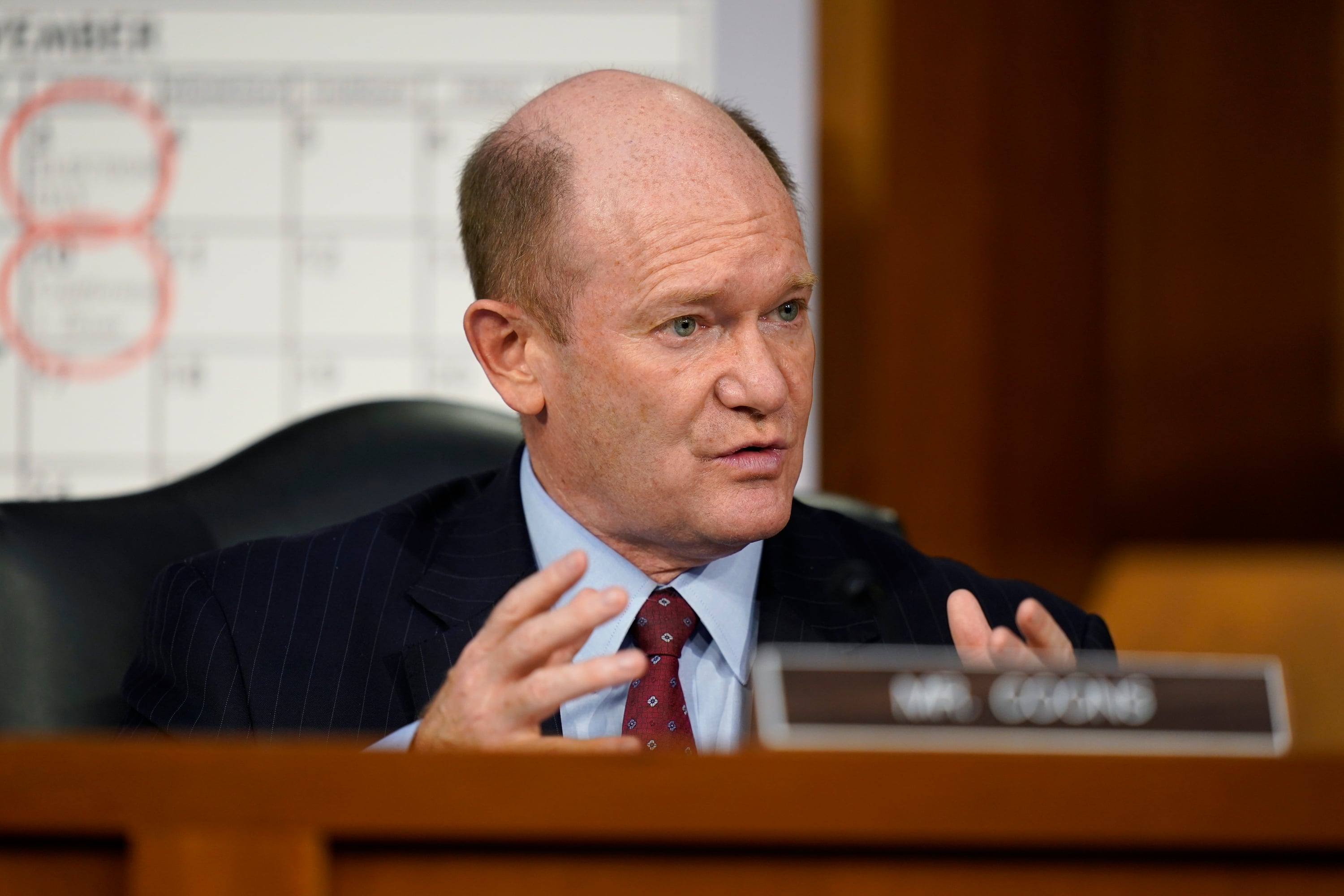 Sen. Chris Coons asks Amy Coney Barrett to clarify her position around recusal from election-related cases, given what Donald Trump has publicly said about the Nov. 3 election winding up in the Supreme Court and the fact that he wants nine justices in place. 2:01

Barrett declined to say whether she would consider stepping aside, as Democrats have requested, from an Obamacare case due to be argued at the court a week after Election Day, in which Trump and Republican-led states are seeking to invalidate Obamacare, the law formally called the Affordable Care Act (ACA).

Barrett noted that the new case centres on a different legal issue than two previous Supreme Court rulings that upheld Obamacare, which she had criticized.

Barrett declined to say how she would approach the new case, but said, “I am not hostile to the ACA.”

“I am not here on a mission to destroy the Affordable Care Act,” she said. “I’m just here to apply the law and adhere to the rule of law.”

Barrett also said the White House did not seek her assurance that she would vote to strike down the law.

“Absolutely not. I was never asked — and if I had, that would have been a short conversation,” Barrett said. 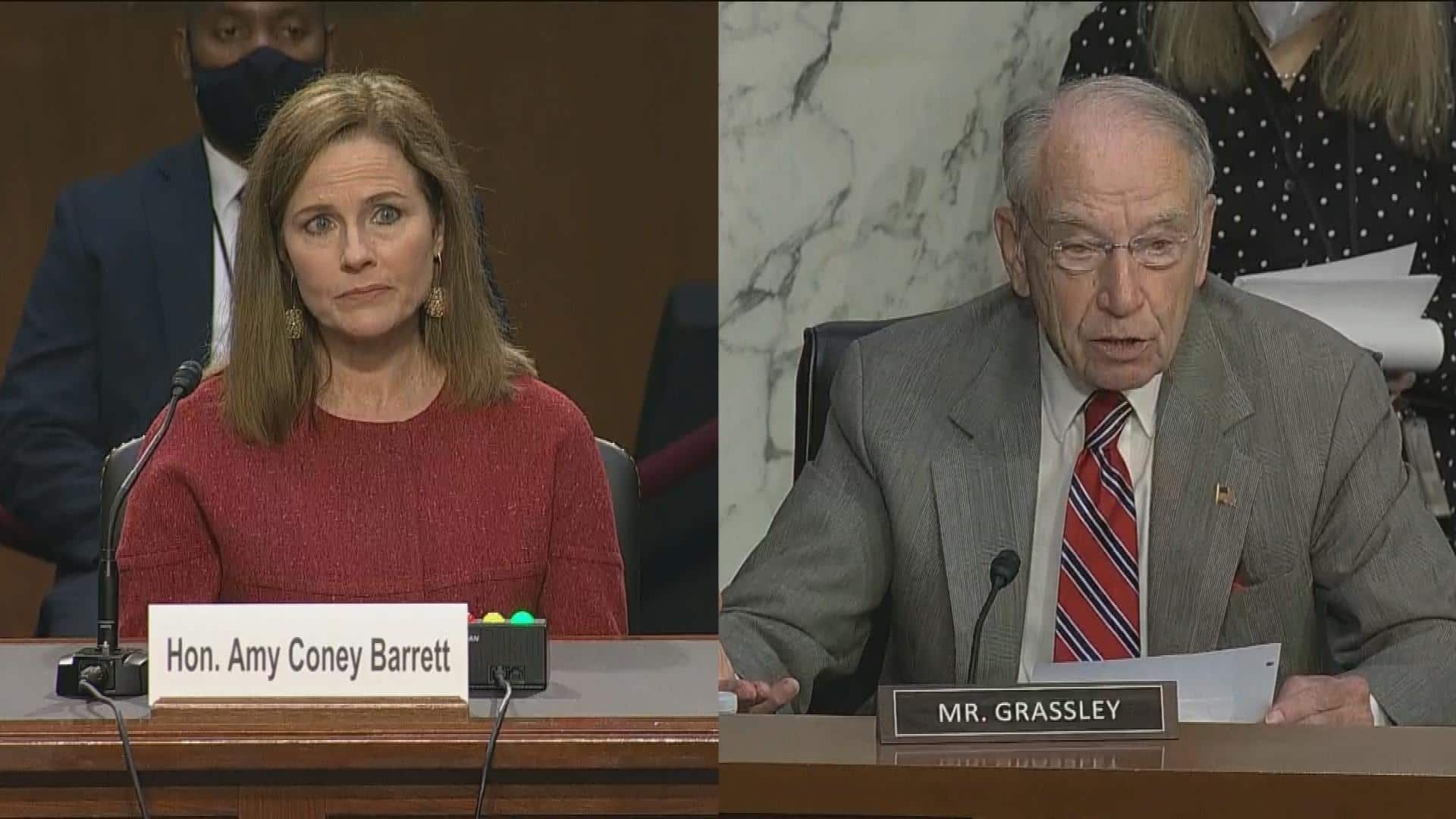 Another question Barrett declined to answer directly was about whether all American presidents should commit to a peaceful transition of power in the event of a loss in a general election.

Trump has refused to say he will do so, saying: “We’re going to have to see what happens.”

Barrett told Sen. Cory Booker that “to the extent that this is a political controversy right now… I want to stay out of it.”

WATCH | Barrett’s exchange with Sen. Booker about commitment to peaceful transition of power: 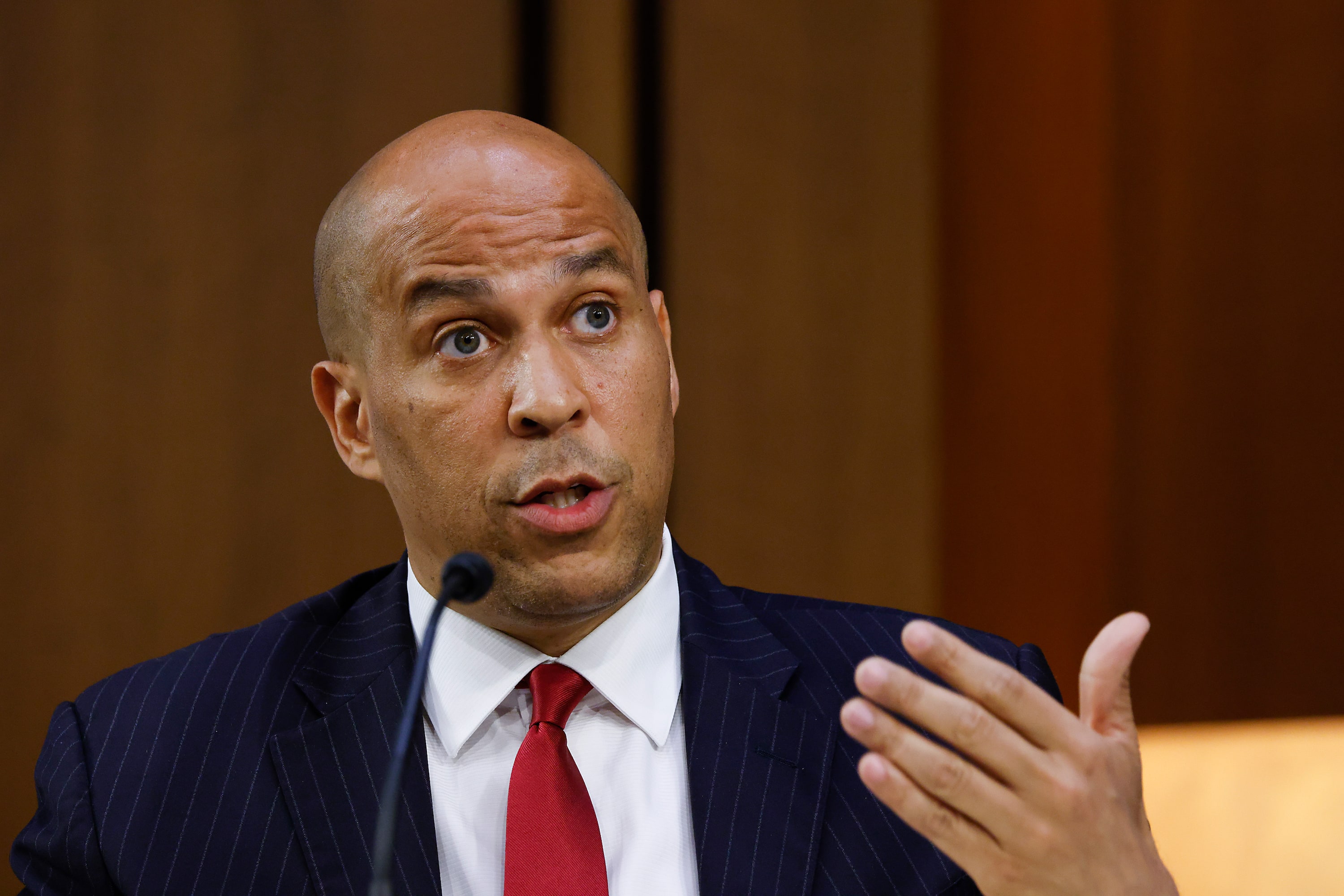 Sen. Cory Booker asks Amy Coney Barrett whether all U.S. presidents should commit to a peaceful transition of power following an election. 1:48

While Democrats were persistent in their questioning, the hearing retained a respectful tone and Barrett remained even-tempered while nimbly sidestepping questions about her views on abortion, LGBT rights, gun control and voting rights.

Republicans have a 53-47 Senate majority, leaving Democrats with little to no chance of blocking Barrett’s confirmation.

Barrett, 48, would tilt the Supreme Court further to the right and give conservative justices a 6-3 majority, making even the unexpected victories on which liberals have prevailed in recent years, including abortion and gay rights, rarer still.

Abortion rights advocates fear Barrett would vote to overturn the 1973 Roe v. Wade ruling that legalized abortion nationwide. Asked about the ruling, Barrett said she would consider the usual factors on whether to overturn a precedent.

“Judges can’t just wake up one day and say, ‘I have an agenda, I like guns, I hate guns, I like abortion, I hate abortion,’ and walk in like a royal queen and impose, you know, their will on the world,” Barrett said.

But Barrett indicated Roe v. Wade was not a “super-precedent” that could never potentially be overturned.

“I’m answering a lot of questions about Roe, which I think indicates Roe does not fall in that category,” she said. “Scholars across the spectrum say that doesn’t mean that Roe should be overruled, but descriptively it does mean it is not a case that everyone has accepted.”

Sen. Dianne Feinstein, the panel’s top Democrat, asked Barrett whether she believed Roe v. Wade, which recognized a woman’s constitutional right to terminate a pregnancy, was properly decided. She declined to answer. 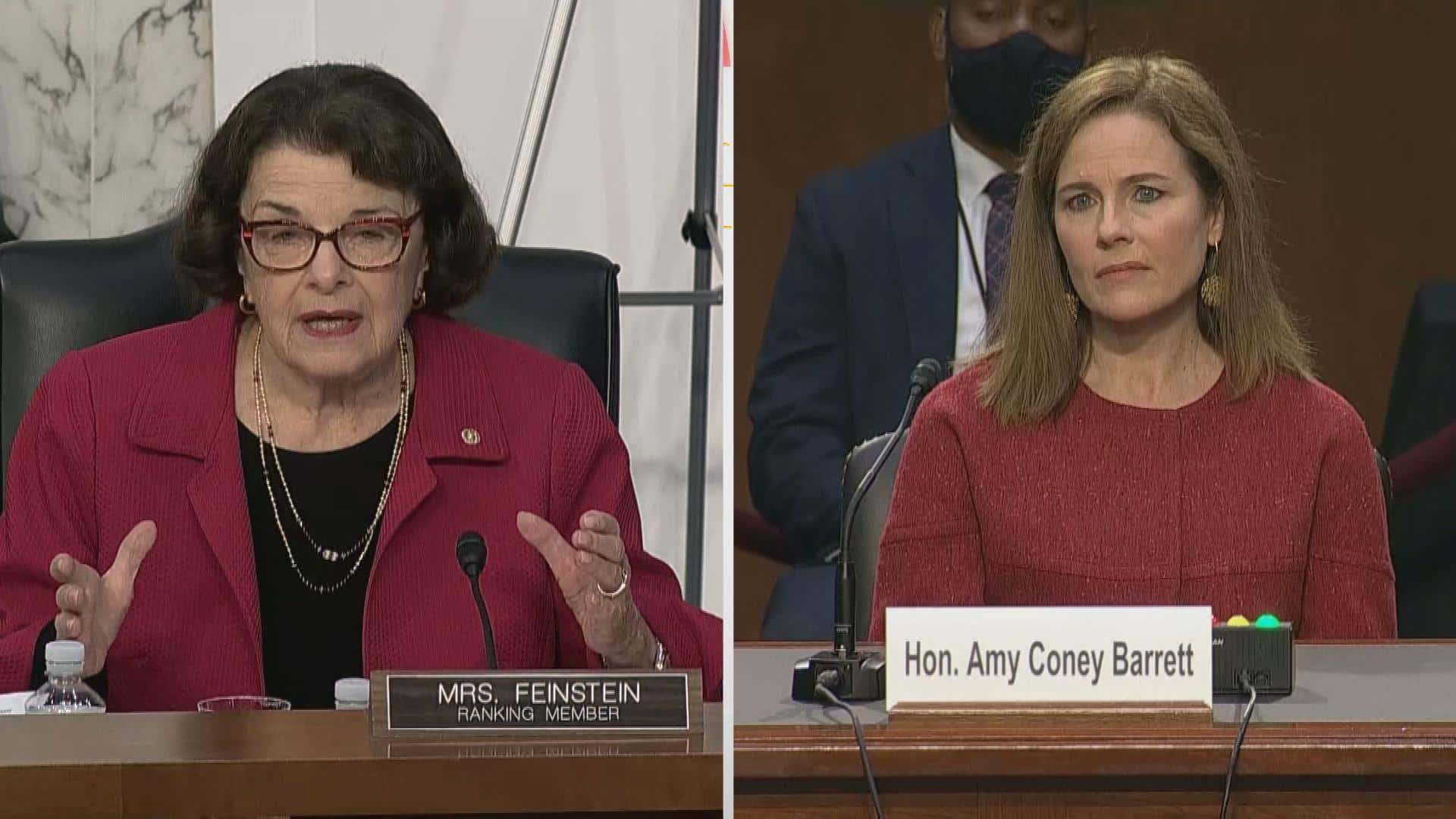 Facing questions from Sen. Dianne Feinstein, Supreme Court nominee Amy Coney Barrett would not take a position on the legality of Roe v. Wade, the key abortion ruling made by the U.S. Supreme Court in 1973. 4:38

Feinstein told Barrett it was “distressing not to get a straight answer.”

Republican Sen. Lindsey Graham, the committee’s chairman, opened the questioning by asking her about her conservative legal philosophy known as originalism, in which laws and the constitution are interpreted based on the meaning they had at the time they were enacted.

“That meaning doesn’t change over time and it’s not for me to update it or infuse my own policy views into it,” Barrett said.

Graham asked Barrett, a devout Catholic and a favourite of religious conservatives, whether she could set aside her religious beliefs in making decisions as a justice.

‘No agenda’ on gay rights: Barrett

Barrett called the late conservative Justice Antonin Scalia — for whom she served as a clerk two decades ago — her mentor, but said she would not always rule the same way as him.

Demonstrators for and against Barrett’s nomination gather in D.C.:

And then the two protests met outside of the Supreme Court <a href=”https://t.co/wdUYslMbwl”>pic.twitter.com/wdUYslMbwl</a>

Barrett declined to answer when Feinstein asked her whether the U.S. Constitution gives the president the authority to unilaterally delay a general election under any circumstances. Barrett said if such a question came before her as a judge she would have to hear arguments and read legal briefs before deciding.

Asked about George Floyd, a Black man killed by police in Minneapolis in May in an incident that triggered widespread protests, Barrett said the issue was “very, very personal for my family” as two of her children — born in Haiti and adopted — are Black. Barrett said she and one of her daughters, Vivian, cried together after seeing the video.

“It’s a difficult one for us like it is for Americans all over the country,” Barrett said.

WATCH | Barrett shares the impact the George Floyd video had on her family: 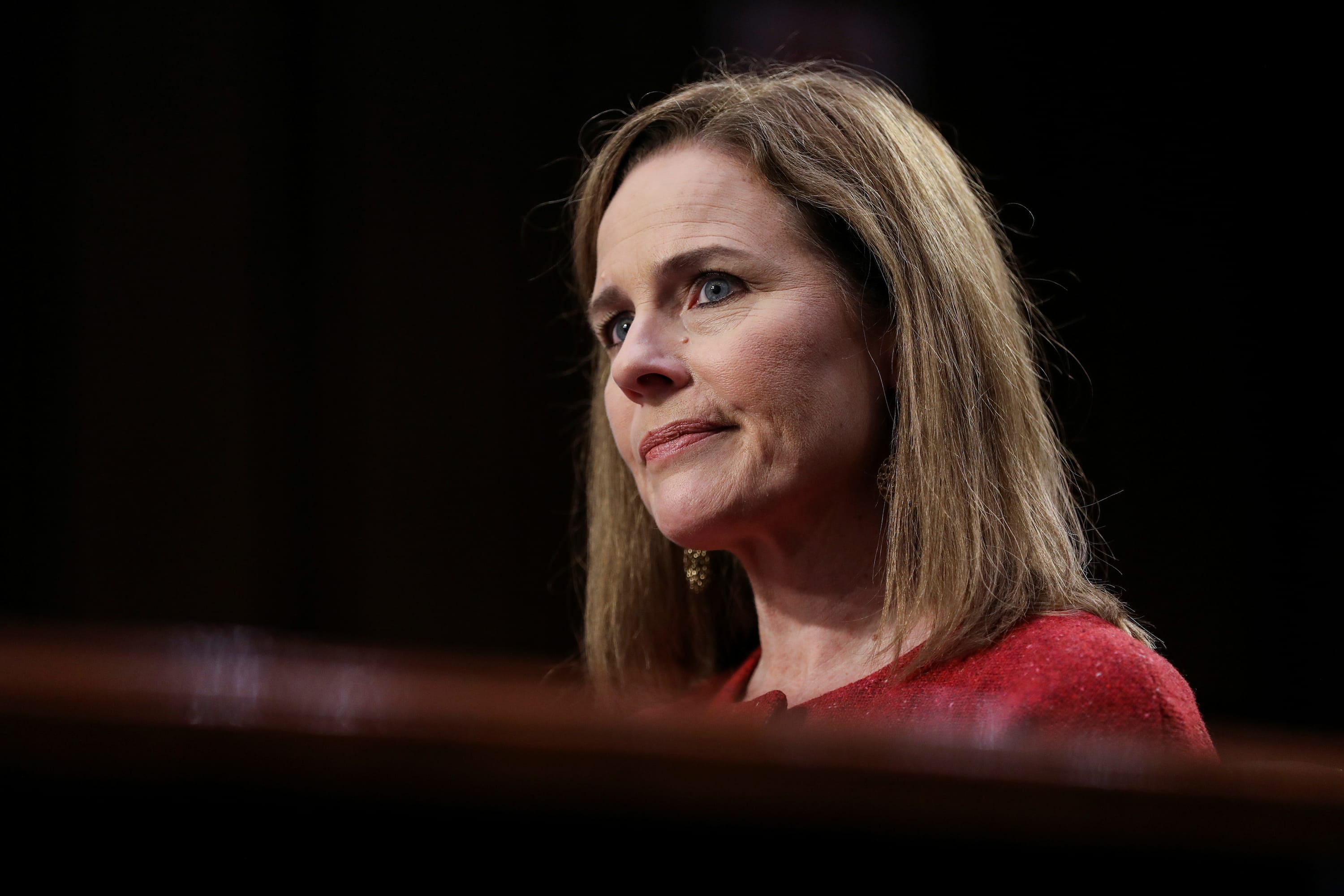 When asked about George Floyd — a Black man killed by a white police officer in Minneapolis — and racism in the U.S., Supreme Court nominee Amy Coney Barrett made a distinction between her feelings as a person and her role as a judge, refusing to give her thoughts on systemic racism as Sen. Dick Durbin requested. 2:56

Trump’s nomination of Barrett came late in an election cycle when Republican control of both the White House and Senate is at stake.

The confirmation hearing format has changed because of the COVID-19 pandemic, with the public excluded and some senators participating remotely.

A full Senate vote is expected by the end of October on Barrett’s confirmation to a lifetime job on the court.