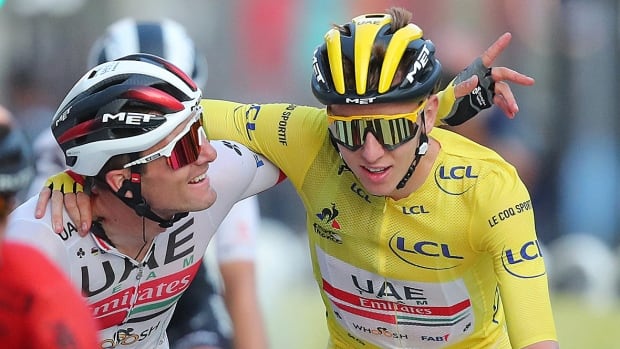 In a stunning performance for the ages, Tour de France rookie Tadej Pogacar won cycling’s showpiece race Sunday on the eve of his 22nd birthday.

Pogacar became the second-youngest winner of the 117-year-old event that this year braved, and overcame, France’s worsening coronavirus epidemic.

Turning him from promising prodigy into cycling superstar, Pogacar became the youngest winner since World War II and the first from Slovenia.

His victory was incredible, too, for the way in which he sealed it: at the last possible moment, on the penultimate stage before Sunday’s finish on Paris’ Champs-Elysees.

In a high-drama time trial on Saturday, he left the race breathless by snatching away the overall lead from Slovenian countryman Primoz Roglic.

Their 1-2 is the first for one country since British riders Bradley Wiggins and Chris Froome went 1-2 at the 2012 Tour. Australian Richie Porte rounded out the podium, at age 35, after his brilliant time trial that hoisted him from fourth to third overall.

With jets trailing plumes of red, white and blue smoke above the riders as they raced toward the finish, the Tour was also celebrating a victory — over the coronavirus.

None of the 176 riders who started, or the 146 finishers who raced into Paris, tested positive in multiple batteries of tests, validating the bubble measures put in place by Tour organizers to shield them from infection.