The best Canadian athletes brought some light to a dark year

The best Canadian athletes brought some light to a dark year

Soon, we’ll turn the calendar and finally be done with this year. It won’t really make a difference. We already know our arbitrary lines don’t stop the virus. But we’ll have made it through… something. Which is probably worth celebrating. Hey, these days, you take your pleasures where you can.

And that’s kind of what sports was about this year. To be honest, they only returned during a global pandemic because some very rich people could not bear becoming slightly less rich. But it still felt nice to get them back, no? Something familiar. Something normal. Something to do, anyway.

It’s a weird feeling to be picking the top Canadian athletes of the year right now. What these people did for our entertainment can’t compare to the contributions of, say, a nurse or a kindergarten teacher. But, still, they brought us some light in a dark time. And allowed us to imagine better days ahead.

Here’s how the three leading candidates for the Lou Marsh Trophy, which will be awarded on Tuesday, did that:

He just turned 20 a month ago, but the Edmontonian who was born in a refugee camp in Ghana is already one of the best young players in world soccer — and probably the most exciting one Canada has ever produced.

For someone his age, Davies’ accomplishments against top-shelf competition this year were astonishing. Germany’s Bundesliga, which is one of the best leagues in the world, named him rookie of the year after he helped Bayern Munich capture its eighth consecutive championship.

Davies also played a key role in Bayern’s winning the most prestigious title in club soccer — the UEFA Champions League.

His jaw-dropping run to set up a goal in a quarter-final trashing of Barcelona is one of the best soccer highlights of 2020, and it showcased Davies’ world-class speed, agility and ball skills. When Bayern went on to beat Paris Saint-Germain in the final, Davies became the first player from the Canadian men’s national team to win the Champions League.

Davies also would have had a chance to kick-start Canada’s quest to qualify for its first men’s World Cup since 1986, but the opening round of regional qualifying was pushed back to next year. The team is still likely to fall short this time. But, at the very least, the rise of Davies gives hope for 2026, when Canada is co-hosting.

WATCH | CBC Sports’ Devin Heroux on the year that was:

Canada’s most tantalizing young basketball player finally put it all together this year with a magical run in the NBA playoffs.

It started in the first round, where the 23-year-old Denver Nuggets guard dropped 50, 42 and 50 points on Utah in consecutive games. Only Michael Jordan (the greatest player of all time) and Jerry West (the guy depicted in the NBA logo) have scored more total points in three straight playoff games. Pretty good company.

Murray didn’t stop there. After Denver eliminated Utah, he scored 26, 21 and then 40 in Game 7 as the Nugget climbed out of a 3-1 series hole to upset Kawhi Leonard’s Clippers. Denver’s run ended in the Western final vs. the Lakers, but Murray averaged 25 points in the series.

Like Davies’ emergence on the soccer field, Murray’s boosts his national team’s hopes of snapping a long drought. Canada hasn’t reached the Olympics in men’s basketball since 2000, but can do so by winning a last-chance qualifying tournament in Victoria this summer.

Canada’s chances of making the Olympics (maybe even doing some damage in them) look a lot better now with a potential starting backcourt of Murray and Shai Gilgeous-Alexander, another rising star. Availability could be an issue with the NBA season pushed back, but the future of Canadian basketball has never looked brighter.

His type of work tends to go unnoticed (there are no offensive lineman on your fantasy football team) but Duvernay-Tardif played a vital role in a historic Super Bowl victory.

The 6-foot-5, 320-pound Quebecer’s blocking helped Kansas City win its first NFL title in 50 years and made it possible for young quarterback Patrick Mahomes to win Super Bowl MVP — the final step in his ascension to football superstardom.

A few weeks later, the pandemic hit, and we were reminded once again that Duvernay-Tardif is focused on a higher calling. As part of his off-season work toward becoming a physician, he treated residents in a long-term care home in Quebec.

After spending that time helping our most vulnerable people, Duvernay-Tardif decided it didn’t feel right to go back to protecting Mahomes. So he opted out of his multi-million-dollar NFL contract for this year to continue his medical training.

Duvernay-Tardif is nowhere near the athlete Davies and Murray are, and he’s not going to lift the fortunes of a Canadian national team. But it’s just good to know there’s someone like him out there.

Read more about how athletes left their mark on 2020 in this essay by CBC Sports’ Devin Heroux, and find out some Canadian athletes’ pick for the Lou Marsh in this video:

WATCH | Who are athletes picking for 2020 Lou Marsh Trophy?: 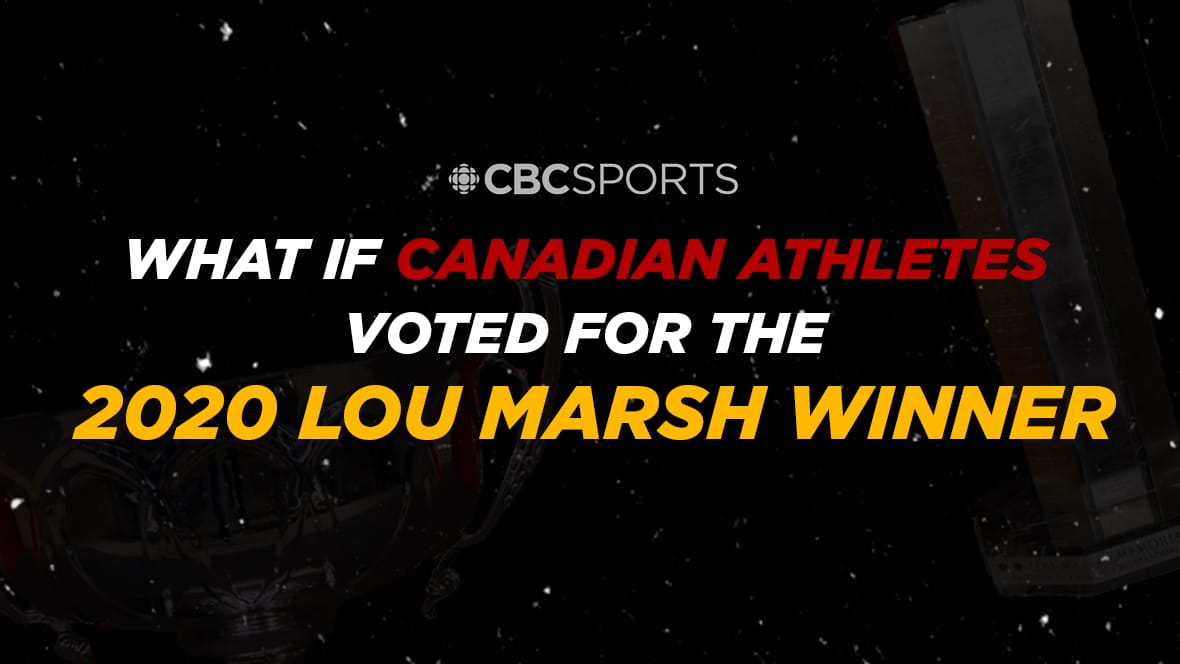 The Lou Marsh trophy is awarded to Canada’s best athlete, as voted by the media. But what if athletes got a vote? We spoke to past winners, and surveyed Canadian athletes to see who they would pick as the 2020 winner. 4:36