The most powerful voters in the U.S. right now: Trump-loving Georgians

The most powerful voters in the U.S. right now: Trump-loving Georgians

They drove for hours to see Donald Trump last weekend then lined up for hours more, wearing Trump caps and T-shirts, chanting Trump chants, jeering various Trump’s nemeses, and seething over an election they will eternally insist was stolen from Trump.

The decisions made by this same group of Georgia voters over the next few weeks could shape the course of American politics for the next few years.

A pair of Jan. 5 elections in this state will determine which party controls the U.S. Senate, with registration closing Monday and advance voting beginning next week.

To hold the chamber, Republicans must win one of these two races; the outcome will affect future president Joe Biden’s ability to confirm judges, appoint cabinet members, and sign legislation.

The concern for Republicans: Will these voters show up?

The party’s fortunes depend on turnout from what might be described as ‘Trump First’ voters, those diehard supporters currently fuming at anybody they see as insufficiently loyal to the president.

What has party brass concerned: the possibility these voters might stay home after the presidential election, disillusioned by Republican officials’ refusal to help Trump overturn the result.

The weekend rally in Georgia allowed for a timely temperature-taking of this powerful slice of the electorate.

Very few people had signs for Republican senators Kelly Loeffler or David Perdue at the event, even though their re-election campaign was ostensibly the reason Trump flew in for an airport runway rally.

When Loeffler and Perdue spoke, rally-goers drowned them out with chants about the president like, “Stop the steal!,” and, “Fight for Trump,” a chorus of thousands of people making clear what truly stirs the political passions.

Seated in the crowd, Pete Toole said he dislikes most politicians — that includes all Democrats, and most Republicans.

The one Republican he truly adores is Trump. And what matters to him, right now, is getting the Supreme Court to overturn the presidential election result.

He’s not sure how, or on the basis of what legal arguments or evidence any of that could happen, but the retired grocer from the small town of Uvalda, Ga. just can’t believe his man truly lost.

The answer to the Democrat voter fraud is not to stay at home – that’s what Pelosi and Schumer want you to do. If you want revenge on the Democrats for their efforts to steal the Presidential election, where we are fighting hard, you have to show up and vote in RECORD numbers! <a href=”https://t.co/XAJ0F2JmeL”>pic.twitter.com/XAJ0F2JmeL</a>

He thinks other Republicans should be doing more to help Trump stay in office and his disdain extends to the two Republican Senate candidates who were on that stage.

“I’m not a Republican or a Democrat. I’m for Trump,” Toole said. “I don’t like [Republican senators Kelly] Loeffler or [David] Perdue.”

Toole sees his party’s candidates as weak and mealy-mouthed and said they need to be tough like Trump. When asked how, specifically, they should model their behaviour on the president’s, he replied: “On everything. They should have his personality. Speak their mind.” 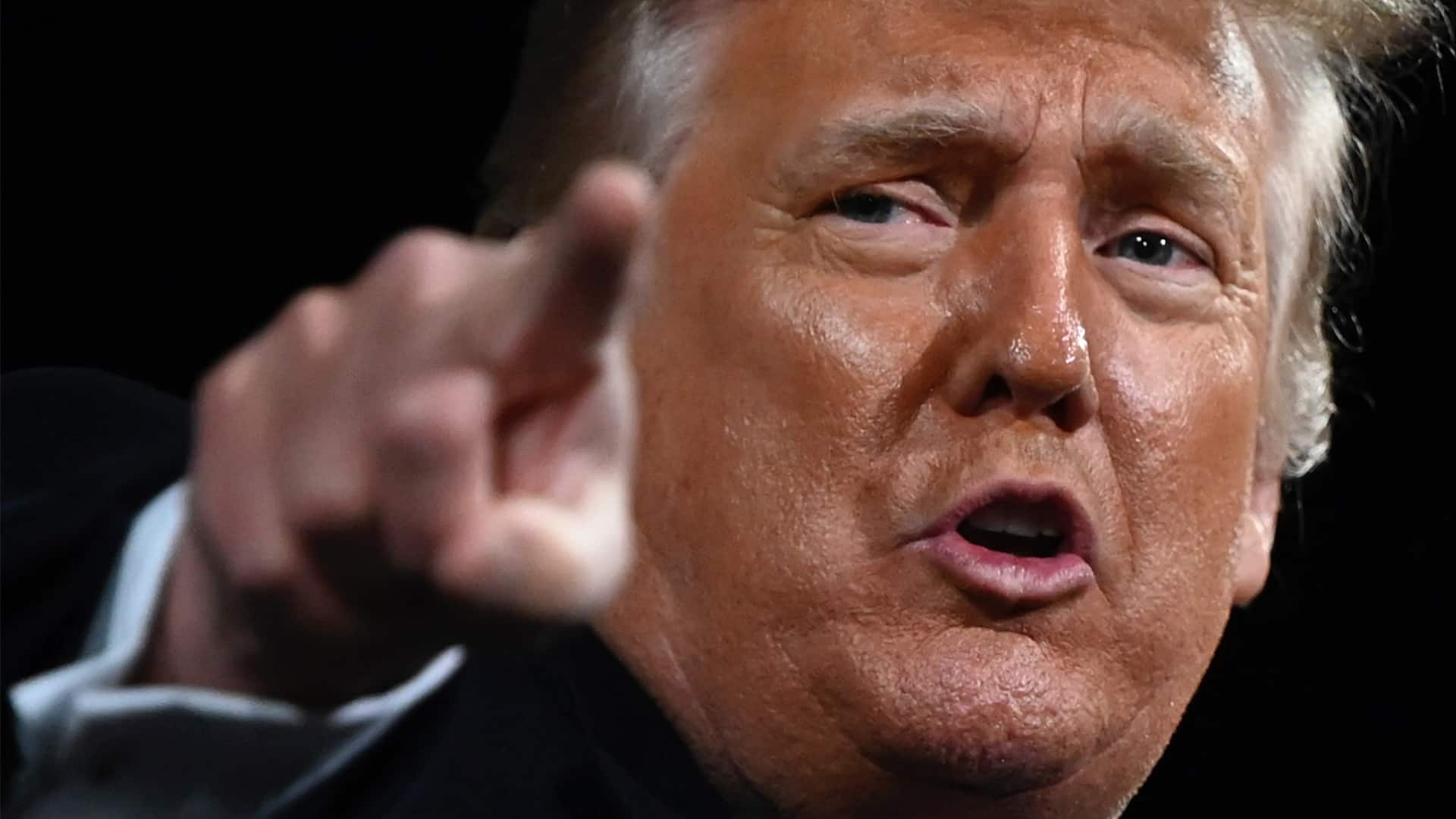 So what’s the bottom line — will he turn out for the Senate runoffs or not? “I’m going to vote probably for Loeffler and Perdue.”

The reason: to stop the left from gaining power.

And that was the main takeaway from the vast majority of the many rally-goers interviewed by CBC News and other media during the weekend event.

Most of whom said that even if the presidential race mattered most to them, and even if they’re unenthused by most Republicans, they would still turn out and cast ballots to help their party keep the Senate.

Lauren Voyles, who made a five-hour drive from north of Atlanta for the event, said she has lost faith in the electoral system. She thinks the vote was rigged against the president, despite the lack of evidence of electoral fraud.

She fumed at the so-called “crooks,” and the “fake-news media,” and what she sees as the weak-kneed Republican establishment not fighting hard enough to keep Trump in the White House.

When asked if she’ll vote in the Senate race she said: “Not in the current system — why would I?”

That dismissive attitude was echoed by angry Republicans who at a recent event shouted down the party chair, and by pro-Trump lawyers who urged a boycott of Senate races as a protest against a party establishment they deride as disloyal to the president.

Stakes high for Democrats too

Such talk is sweet music to Democrats’ ears.

One Democrat who lives several hours north raised her hands in pretend prayer when asked if she expected rifts on the right to depress Republican turnout.

Latresha Jackson, a volunteer with the Democratic Party near Atlanta, said her party badly wants those two seats, which would result in a 50-50 Senate tie and allow vice-president-elect Kamala Harris to cast tie-breaking votes.

“Democrats understand what’s on the line,” Jackson said, speaking at her home in Forsyth County.

The head of the Democratic Party in that same county, Melissa Clink, noted that the party that retains the Senate doesn’t just win more votes — its leadership controls the chamber agenda and decides which bills come up for a vote.

All of which holds potential consequences on issues like health care, climate change, infrastructure, and immigration policy.

“Two years of gridlock,” is how Clink described a McConnell-led Senate. “Right now [McConnell is] the gatekeeper of what we even speak about on the floor.”

Her county branch began dropping off promotional flyers last weekend for the Jan. 5 vote, and progressive groups have mailed out applications for absentee ballots.

Democrats, however, have a taller hill to climb.

While some recent polling gives Democrats an edge in what will likely be two close races, history and math are on the Republican side.

For starters, Republicans only need to win one race to retain the advantage; Democrats need both. In addition, Republicans have a history of stronger turnout in runoff elections like these ones, which in Georgia are held after a general election when there are multiple candidates and nobody surpasses 50 per cent.

In the last such runoff, in 2018, the Republican candidate for secretary of state, Brad Raffensperger, expanded his wafer-thin general-election lead by more than 3 percentage points in the runoff.

That’s the same Brad Raffensperger who is now receiving death threats because he’s in charge of running Georgia’s elections and he’s refusing to help Trump overturn the result.

Which brings us to the president’s rally.

After the weekend event, it’s now crystal-clear what the Republican strategy is in its effort to ensure turnout from Trump-loving voters.

They’re keeping Trump in the conversation.

Several speakers at the weekend rally cast this Senate vote as a chance to cement the president’s legacy and protect it from Democrats who would undo his tax, energy, climate, and other policies.

Trump, for his part, delivered a long speech with three basic themes.

First, he encouraged Republicans to turn out. He called this vote the most important congressional runoff in history, and lauded the two Senate candidates.

Second, he trashed other Georgia Republicans. The bulk of Trump’s speech consisted of grievances about the election, and complaints about the governor, who has refused to help him overturn the result.

Finally, he also gave what sounded like a valedictory address. Trump concluded the speech by listing things his presidency achieved, from tax cuts, to building a U.S. embassy in Jerusalem.

Trump urged Georgians to cement that legacy by turning out for the Perdue and Loeffler: “These seats are the last line of defence to save America and protect all that we have accomplished.”

Not that Trump will ever admit defeat.

Nor will his supporters. They aren’t just grumbling about an election loss; a large number appear to deeply believe he was robbed, based on a litany of unproven or disputed allegations now repeatedly dismissed in court.

They’re livid at the media for reporting he lost. A few screamed at a Fox News crew, while several shouted epithets at the media bus leaving the rally.

Bob Kunst, who drove up from Miami for what he said was his 201st Trump-related event, said Republicans plan to unseat, in future primaries, anyone who fails to help Trump hold onto power.

Some of the rhetoric, he said, is getting even more heated.

“This is like civil-war time,” he said. “I am the most mild-mannered person. But I am way angry. … I’ve had people here tell me they’re armed to the teeth.”

Yet he still cares about the Senate and wants Republicans to win. “They have to,” Kunst said.

One conservative radio host who’s been lukewarm on Trump — initially opposing him, then backing him, and often criticizing him — says he expects the party to unite for the Senate races.

Erick Erickson, a Georgia-based talk-show host, said a number of Republicans do care first and foremost about Trump.

But he said there’s also been a swift backlash to the talk about a boycott, and he expects Republicans will show up. He said history has also shown Georgia Republicans do to turn out in non-presidential races, as they did in the 2018 midterm year.

“I think the GOP goes two for two [in the Senate races],” Erickson said in an interview outside his Atlanta studio.

“But it’s gonna be a slugfest. Those of us in TV and radio — we’re gonna come out the winners in this. … It’s going to be close. Maybe closer than it should be.”