A retired British shop clerk received the first shot in the country’s COVID-19 vaccination program Tuesday, signalling the start of a global immunization effort intended to offer a route out of a pandemic that has killed 1.5 million.

Margaret Keenan, who turns 91 next week, got the shot at 6:31 a.m. local time on what public health officials have dubbed V-Day. She was first in line at University Hospital Coventry, one of several hospitals around the country that are handling the initial phase of the United Kingdom’s program.

As luck would have it, the second injection went to a man named William Shakespeare, an 81-year-old who hails from Warwickshire, the county where the Bard was born.

“I feel so privileged to be the first person vaccinated against COVID-19,” said Keenan, who wore a surgical mask and a blue Merry Christmas T-shirt decorated with a cartoon penguin wearing a Santa hat. “It’s the best early birthday present I could wish for because it means I can finally look forward to spending time with my family and friends in the New Year after being on my own for most of the year.”

The U.K. is the first Western country to start a mass vaccination program, after British regulators last week authorized the use of a COVID-19 shot developed by U.S. drugmaker Pfizer and Germany’s BioNTech. U.S., Canadian and European Union authorities are also reviewing the vaccine, alongside rival products developed by U.S. biotechnology company Moderna, and a collaboration between Oxford University and drugmaker AstraZeneca.

Prime Minister Justin Trudeau says Ottawa expects to receive up to 249,000 doses of the Pfizer vaccine by the end of the year.

Britain’s program is likely to provide lessons for other countries as they prepare for the unprecedented task of vaccinating billions of people. U.K. health officials have been working for months to adapt a system geared toward vaccinating groups of people like school children and pregnant women into one that can rapidly reach much of the nation’s population.

Amid the fanfare that greeted Britain’s first shot, authorities warned that the vaccination campaign would take many months, meaning painful restrictions that have disrupted daily life and punished the economy are likely to continue until spring.

“We still have a long road ahead of us, but this marks the route out,” British Health Secretary Matt Hancock told the BBC.

WATCH | Couple speaks to CBC News shortly after getting their COVID-19 vaccine: 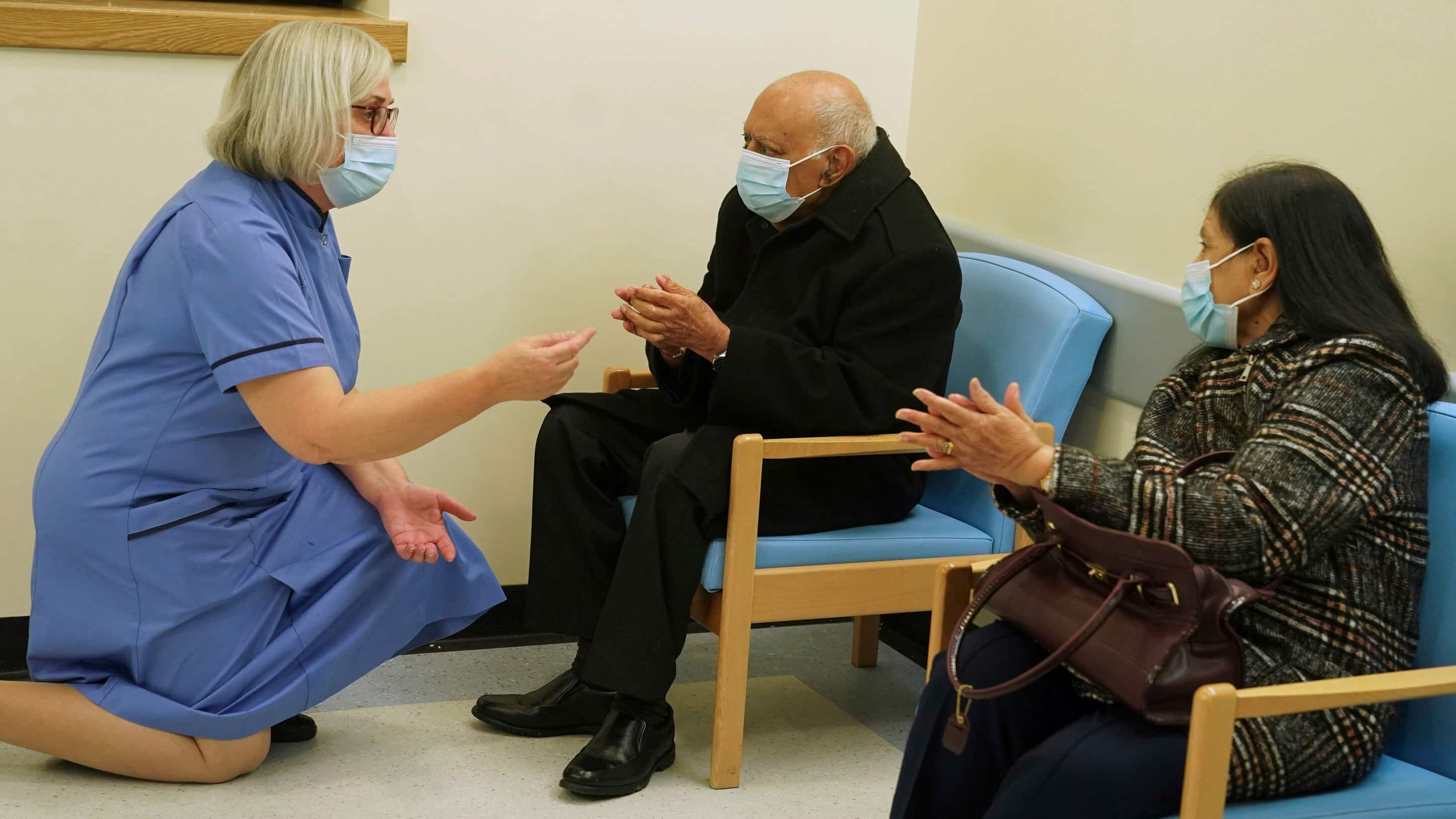 Two of the earliest recipients of the Pfizer-BioNTech COVID-19 vaccine, Hari and Ranjan Shukla of Newcastle, U.K., believe scientists have made a safe vaccine and are encouraging their friends to take it too. 4:58

People in hospital over 80 get first dibs

Britain has received 800,000 doses of the Pfizer vaccine, enough to vaccinate 400,000 people. The first shots will go to people over 80 who are either hospitalized or already have outpatient appointments scheduled, along with nursing home workers and vaccination staff. Others will have to wait their turn.

Health officials have asked the public to be patient because only those who are most at risk from the virus will be vaccinated in the early stages. Medical staff will contact people to arrange appointments, and most will have to wait until next year before there is enough vaccine to expand the program.

Buckingham Palace refused to comment on reports that Queen Elizabeth, 94, and her 99-year-old husband, Prince Philip, would be vaccinated — and would make that known — as a public signal of the shot’s safety.

Britain is the first country to deliver a broadly tested and independently reviewed vaccine to the general public. Russia and China have both already started giving domestically produced vaccine candidates to their populations, though they have done so before final safety and efficacy trials have been completed.

The vaccine can’t arrive soon enough for the U.K., where more than 61,000 people have died in the pandemic — more than any other country in Europe, according to data tallied by Johns Hopkins University. The U.K. has recorded more than 1.7 million confirmed cases of the virus.

WATCH | British PM urges all citizens to get COVID-19 vaccine: 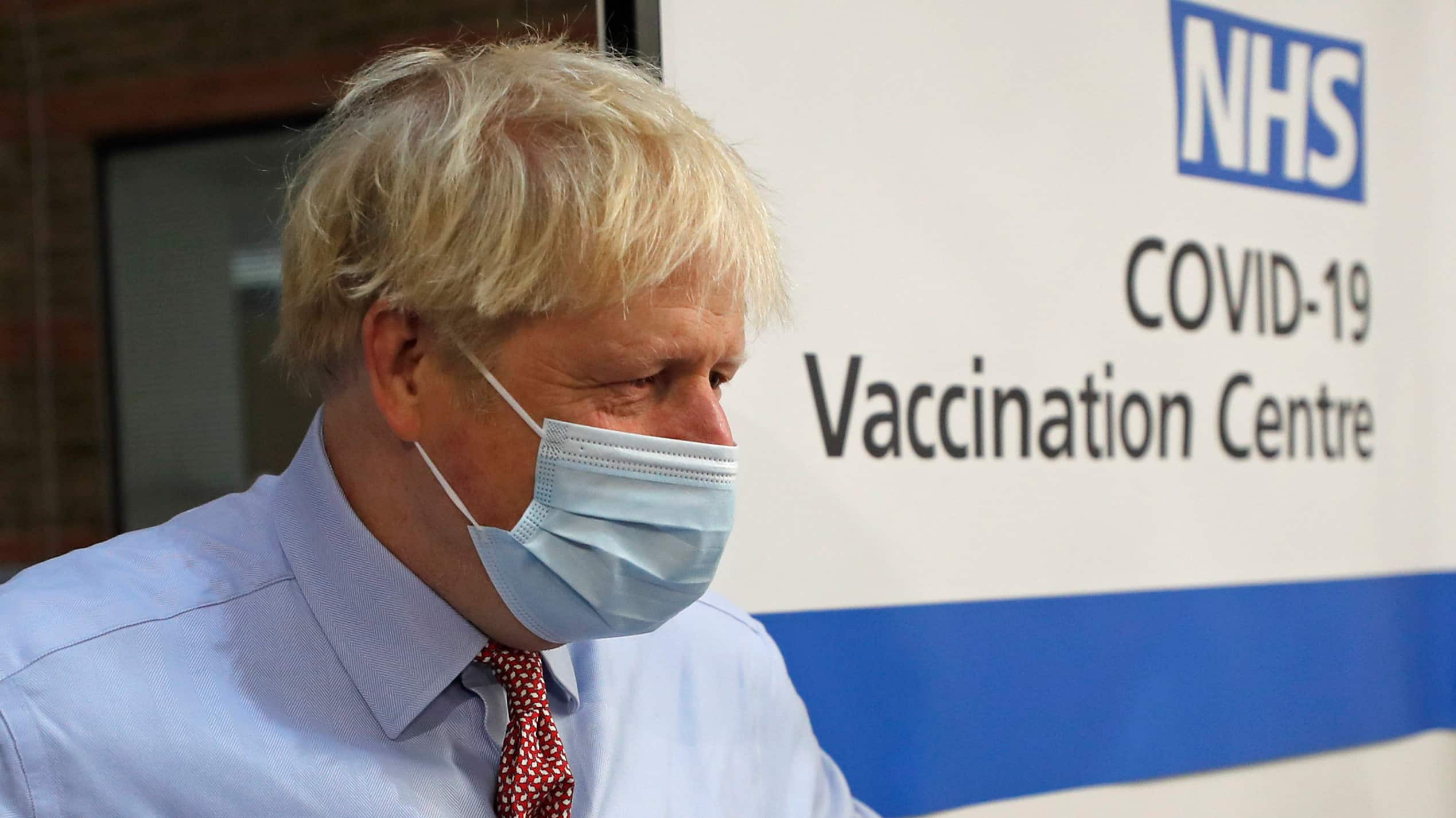 British Prime Minister Boris Johnson said being against the coronavirus vaccine is ‘totally the wrong approach,’ as the U.K. kicked off a global vaccination effort.  0:24

The vaccine, however, remains experimental. While it seems to prevent people from getting sick, it is still unclear how long that protection lasts.

The 800,000 doses Britain has received so far are only a fraction of what is needed. The government is targeting more than 25 million people, or about 40 per cent of the population, in the first phase of its vaccination program, which gives first priority to those who are highest risk from the disease.

Stephen Powis, medical director for the National Health Service in England, said the first shot was an emotional moment.

“This really feels like the beginning of the end,” he said. “It’s been [a] really dreadful year, 2020 — all those things that we are so used to, meeting friends and family, going to the cinema, have been disrupted. We can get those back. Not tomorrow. Not next week. Not next month. But in the months to come.”

The vaccination program will be expanded as the supply increases, with the vaccine offered roughly on the basis of age groups, starting with the oldest people. Britain plans to offer COVID-19 vaccines to everyone over the age of 50, as well as younger adults with health conditions that put them at greater risk from the virus.

In England, the vaccine will be delivered at 50 hospital hubs in the first wave of the program, with more hospitals expected to offer it as the rollout ramps up. Northern Ireland, Scotland and Wales are making their own plans under the U.K.’s system of devolved administration.

Logistical issues are slowing the distribution of the Pfizer vaccine, which the company says must be stored in a freezer at –80 C to –60 C or in a thermal container at –90 C to –60 C. Authorities also are focusing on large-scale distribution points because each package of vaccine contains 975 doses and they don’t want any to be wasted.

The U.K. has agreed to buy more than 350 million doses of vaccine from seven different producers. Governments around the world are making agreements with multiple developers to ensure they lock in delivery of the products that are ultimately approved for widespread use.

All of those logistical challenges culminated in nurse May Parsons inserting a syringe into Keenan’s left shoulder and depressing the plunger to deliver the vaccine. Parsons, originally from the Philippines, has worked for the NHS for the past 24 years.

“I’m just glad to be able to play a part on this historic day,” she said. “The last few months have been tough for all of us working in the NHS, but now it feels like there is a light at the end of the tunnel.”