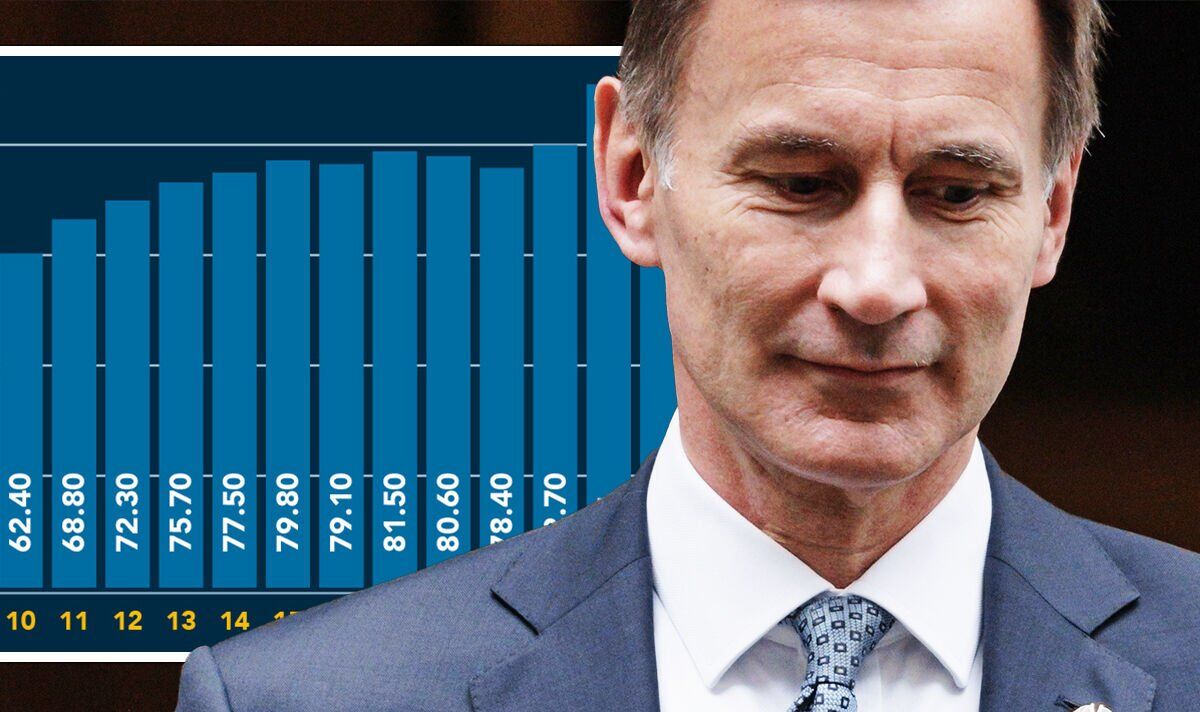 Public sector borrowing approached £30billion last month in a dramatic overshoot of the Government’s fiscal watchdog’s predictions. Driven by energy bill support measures and inflation-linked debt, the Treasury forked out the second-highest amount in interest payments to its creditors on record. Express.co.uk has plotted the graphs to see just how much the country is on the hook.

Chancellor Jeremy Hunt commented: “Right now we are helping millions of families with the cost of living, but we must also ensure that our level of debt is fair for future generations.

“We have already taken some tough decisions to get debt falling, and it is vital that we stick to this plan so we can halve inflation this year and get growth going again — creating better-paid jobs across the country.”

The borrowing figure came in at almost £10billion over the £17.6billion forecast in November by the Office for Budget Responsibility (OBR), the Government’s independent fiscal advisors.

As a result, public sector net debt excluding public sector banks climbed to £2,503.6billion during the month – around 99.5 percent of the UK GDP. Outside of the height of the pandemic in early 2020, Government debt has not exceeded the country’s annual economic output since 1963.

On the other hand, with around a quarter of all Government debt being in bonds index-linked to the rate of Retail Price Inflation (RPI) – a producer-level equivalent to today’s more familiar CPI – interest payments have been pulled upwards by inflation.

As a result, Government day-to-day expenditure rose by 20.8 per cent relative to last December to hit £91.2 billion this year – primarily driven by the cost of servicing public debt doubling.

However, in the first nine months of the 2022/23 financial year the public sector actually borrowed less than OBR had initially forecast – at £128.1billion the total came in £2.7billion less than planned.

Alongside November’s unexpectedly positive GDP growth and widespread consensus that inflation may finally have peaked, there is a growing sense of hope that the end may be in sight. Asked last week about his inflation outlook by the Western Mail, Bank of England governor Andrew Bailey said: “There is more optimism now that we are sort of going to get through the next year with an easier path there.”