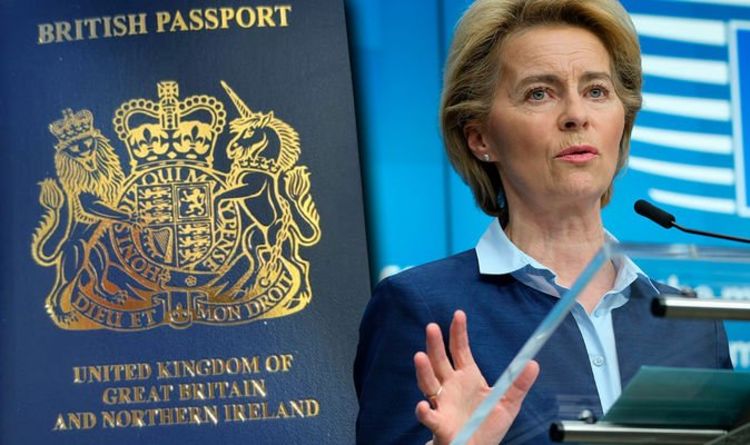 The UK launched its app to trace coronavirus on Monday, which has been developed by NHSX , the digital arm of the NHS. Ministers plan to start testing the device on the Isle of Wight on Tuesday, as they step up their preparations to ease the curfew. The NHSX smart app works on a different system to the Apple and Google one being used by many European countries such as Germany and Austria.

The two devices are not compatible, which has led to fears that if contact tracing becomes mandatory for international travel, then UK citizens will be required to go into a 14 days quarantine on arrival.

The NHSX app operates through a centralised database system, whereas the Apple and Google app uses a decentralised platform.

When a person in the UK is suspected of having the coronavirus, their phone sends the information to a centralised database, which then passes on alerts to those they have been in contact with.

The Apple and Google app directly notifies the contacts of any COVID-19 infected person, avoiding the need to share that information with a third party.

The technology giants’ smart app is already in use in several European countries, that include Switzerland, Austria, Germany, Estonia and the Republic of Ireland.

Matthew Gould, the chief executive of NHSX, claimed that the centralised model has major benefits over its rival, as it will allow health authorities to identify “hotspots” in certain parts of the country and track symptoms more closely.

He insisted that the UK was “not going off in one direction and the rest of the world going off in another,” and said that health chiefs “won’t hesitate to change” tack if the app didn’t work.

Sir Jonathan Montgomery, a professor of healthcare law at UCL, said there were ways round the “technical problem”, and floated the idea of using health certificates to avoid the need for quarantine.

JUST IN: Ricky Tomlinson talks being ‘at risk’ in health admission

The professor, who is chairing the ethics advisory board overseeing the Government’s implementation of contact tracing, told the Daily Telegraph: “If you are moving between [different countries’] apps you might find that it requires quarantine or something of that sort, but I don’t see why the information from the app cannot be translated into some form of certificate.

“This requires some work around, but it is quite hard to see how it would be a deal-breaker.”

However, campaigners warned that the situation could create a two-tiered system, imposing restrictions on where people could travel, depending on which contact tracing app they were connected up to.

Jim Killock, the executive director of the Open Rights Group, said: “The world will fall into two categories where data cannot be easily shared between countries.

“It will mean, essentially, that if you want to benefit from contact tracing you can go to France but not to Southern Ireland or you can’t go to Germany but you can go to Australia.”

The NHSX app uses Bluetooth to detect nearby phones, showing who the owner of the phone has been near.

Anyone downloading the app will be asked to turn on Bluetooth, allow notifications and to enter the first half of their postcode.

People will then be asked the simple question: “How are you feeling, today?”

Those who think they may be infected with the virus will be guided through a series of further questions, designed to gather more detailed information.

If the symptoms confirm possible infection, people will be issued with a reference number and told to call in for a test.

They will also be invited to upload a list of their phone book to the NHS system, which will use a risk-scoring algorithm to decide which contacts are potentially dangerous.

Addressing concerns about privacy, Mr Gould emphasised that the app was voluntary to download, and promised that NHSX would publish both the source code and the data protection arrangements underlying the app.