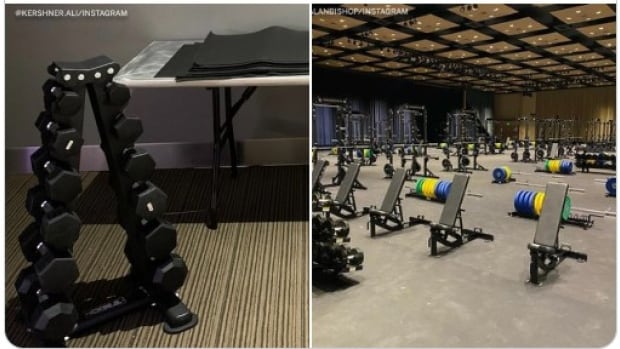 The teams had barely landed in Texas when complaints of inequity between the women’s and men’s tournaments roared over social media posts noting the women’s weight training facilities in San Antonio were severely lacking compared to what the men have in Indianapolis. Both tournaments field 64 teams.

In an Instagram post, Stanford sports performance coach for women’s basketball Ali Kershner posted a photo of a single stack of weights next to a training table with sanitized yoga mats, comparing it to pictures of massive facilities for the men with stacks of free weights, dumbells and squat racks.

“These women want and deserve to be given the same opportunities,” Kershner tweeted. “In a year defined by a fight for equality this is a chance to have a conversation and get better.”

Several top former college and current WNBA players quickly tweeted support for the women and criticism of the NCAA.

“That NCAA bubble weight room situation is beyond disrespectful,” tweeted A’ja Wilson, who led South Carolina to the 2017 national championship and now plays for the Las Vegas Aces in the WNBA.

NCAA Senior Vice-President of women’s basketball Lynn Holzman said the governing body would try to quickly improve the equipment available at the women’s tournament. The original setup was limited because of a lack of available space in San Antonio, with plans to expand once the tournament field shrunk in the later rounds.

“We acknowledge that some of the amenities teams would typically have access to have not been as available inside the controlled environment. In part, this is due to the limited space and the original plan was to expand the workout area once additional space was available later in the tournament,” Holzman said. “However, we want to be responsive to the needs of our participating teams, and we are actively working to enhance existing resources at practice courts, including additional weight training equipment.”

Middle Tennessee State coach Rick Insell said his team hasn’t seen the weight room yet, but has not seen anything else to indicate that the women are getting anything less than the men.

“I saw something on Twitter about the men’s weight room is a lot different and things were being given to the men that were not being given to the women, but I haven’t seen any of that here,” Insell said. “Now, maybe later on we’ll get to see what’s going on. But, right now we’re kind of just going to practice, going to eat and going to your room.”

The NCAA has administered nearly 2,700 tests so far and only one has come back positive which was a great sign for the women’s basketball tournament.

NCAA Senior Vice-President of women’s basketball Lynn Holzman revealed the numbers on a media call Thursday morning, but did not identify who tested positive.

“From the report I received this morning over the past two days, close to 2,700 tests were performed that included the members of the travel parties, bus drivers and staff and only one confirmed positive test,” she said. “It’s a testament to all those involved in our championship. So given the sheer number of individuals involved in this, where we sit currently today, I’m pleased where we’re at.”

Holzman also said that all 64 teams announced Monday in the bracket have arrived safely in Texas so none of the replacement teams will be needed.

“We continue to emphasis the need for us to make sure we’re conducting our championship in a safe manner,” she said.

Everyone will continue to be tested daily.

Obama had N.C. State and Maryland in the Final Four with the two No. 1 seeds. That would mean that the Terrapins, who Obama had picked against a few years ago in his bracket when his niece was playing for Princeton and they were tournament opponents, would knock off Dawn Staley’s South Carolina team in the regional final.

“@BarackObama I’m telling @MichelleObama……it’s obviously you did not confer with her. We will forgive not forget. You’re still our guy tho.”

Obama mostly went with the better seeded teams to advance in the first round. He did have No. 6 Oregon being knocked off by 11th-seeded South Dakota.

The WNBA announced April 15 as its draft date for this season.

Every eligible player who would like to make themselves available for the draft must opt-in by renouncing their remaining intercollegiate eligibility.

A player who wishes to opt-in must email the league no later than April 1. If a player is competing in the Final Four, the player has up to 48 hours after her last game finishes to let the league know if she plans on entering the draft.

In the past, players who have run out of college eligibility are automatically entered into the draft. This became more of an issue this season when all the players were granted an extra year of eligibility by the NCAA because of the coronavirus pandemic.